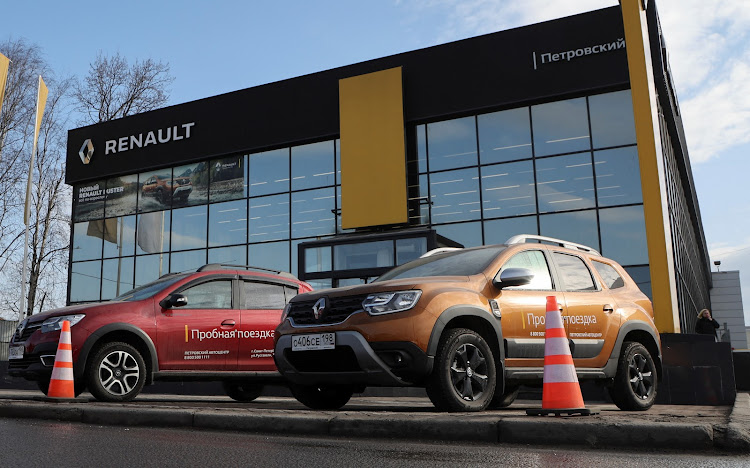 Renault cars are parked outside a showroom in Saint Petersburg. Picture: REUTERS

French carmaker Renault this week reversed plans to resume manufacturing at its Moscow plant after its earlier decision prompted protests and even threats of product boycotts.

When Renault suspended Moscow activities in late February, it blamed logistics complications, not aversion to Russia’s invasion of Ukraine. On Monday this week, it announced plans to reopen the plant.

According to Reuters, the company said its decision did not breach international sanctions against Russia. The plant builds cars both for Renault and its international alliance partner, Nissan.

British Labour Party politician Chris Bryant immediately called for a boycott of Renault vehicles in the UK. Then, on Wednesday, Ukrainian President Volodymyr Zelensky told the French national assembly in a video-link speech that three French companies, including Renault, “must stop being sponsors of the Russian war machine, stop financing the murder of children and women, of rape. French companies must leave the Russian market.”

Later that day, Renault announced it had suspended manufacturing. It was also assessing its relationship with AvtoVAZ – Renault owns a majority stake in the company – whose Lada brand is the country’s best-selling car.

Other motor companies have been falling over one another in attempts to distance themselves from their Russian association – albeit, they hope, on a temporary basis. Some manufacture vehicles there, others simply sell.

Mercedes-Benz, Ford, BMW, Toyota, Ferrari, Volkswagen, Honda, Jaguar, Aston Martin, Suzuki, Porsche, Bentley, Hyundai and Stellantis, as well as tyremaker Continental, are among companies to have suspended manufacturing or sales – leading to Russian threats to temporarily take over their assets in the country. Some lawmakers have gone further, demanding the nationalisation of offenders.

Despite the negative response to its original plan to resume manufacture, there is some sympathy for Renault. Bloomberg reports that Russia is the company’s second-biggest market and a major contributor – about 10% – to global revenue. It’s estimated that through AvtoVAZ and its own Renault brands, it controls about 30% of the Russian car market.

It also employs about 45,000 people there. Other motor companies employ fewer people but they all face the same conundrum: to pay or not to pay workers. To withhold wages would increase global pressure on the Russian economy but would also guarantee a rebellious workforce when – if – production restarts in the future.

Adding to companies’ worries is the potential for Chinese brands to take advantage of the situation and push their own sales. The Chinese government has failed to condemn the invasion of Ukraine.

Given the SA government’s ambivalence towards the situation there, it remains to be seen how the SA motor industry will react to international calls to boycott Russia.

According to the local Automotive Industry Export Council, the value of SA vehicle and components exports to Russia more than doubled from 2019 to 2020 – the latest years for which the industry’s full trade performance has been published. In 2019, SA exported goods worth R34.7m – a figure that rose to R72.1m the following year.

Ukraine is small fry by comparison. In 2020, SA exported R3.1m there. In the case of both countries, most exports will be at the behest of foreign companies, within their global supply networks.

The dangers of doing business in Russia are manifold. Bloomberg says German parts supplier Robert Bosch has suspended the Russian manufacture and distribution of truck components following claims that some have been found in military vehicles invading Ukraine.

Another German supplier, Leoni, continues to build automotive wiring harnesses – electrical conducting wires bound together with insulating materials – in Ukraine. In fact, Leoni is increasing production in the country despite the threat of rocket attacks.

CEO Aldo Kamper said on Wednesday that, having initially suspended Ukraine operations because of the Russian invasion, production had returned to 40% of capacity. It was hoped the addition of a night shift would raise this to 70%. The US-based Automotive News publication quoted him as saying that “workers have had to flee to on-site bunkers on multiple occasions” because of rocket attacks.

Thomas Schäfer, former MD of Volkswagen SA, who left in 2020 to become CEO of the VW-owned Skoda motor company in the Czech Republic, will return to Germany next week to become global CEO of the VW brand.

He will become COO on April 1, then replace current CEO Ralf Brandstätter in August once he has familiarised himself with the business. The VW brand is the biggest within the VW group. Others are Audi, Skoda, SEAT, Lamborghini, Bentley, Porsche and Ducati.

As MD of VWSA from 2015, Schäfer cemented VW’s leadership of the local car market, oversaw major investments in local vehicle manufacture, increased exports and established VW assembly operations in other African countries. He was also a vocal critic of government motor industry policy.​

Is the long-overdue production of Chinese cars and bakkies finally about to take shape in the Eastern Cape?
Opinion
5 months ago