The reality of the mammoth task ahead of him was palpable in his state of the nation address, in both its content and delivery 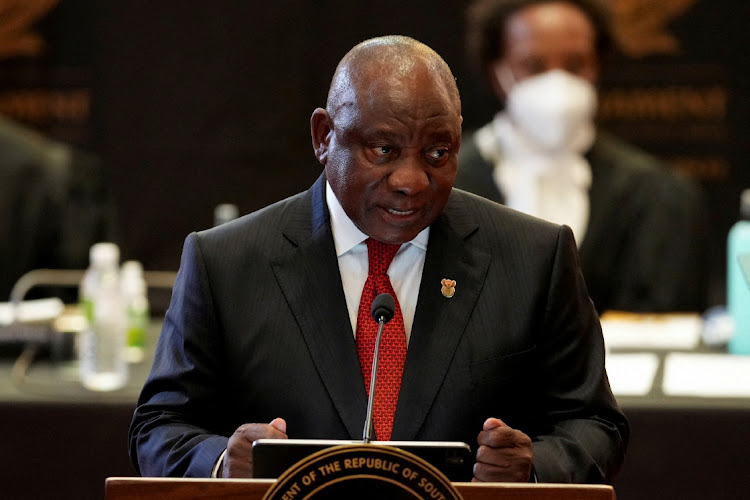 President Cyril Ramaphosa’s announcement that businessman Sipho Nkosi is joining the government was one of the highlights of the state of the nation address on Thursday night. Nkosi has been brought into the president’s office to help cut through the red tape that ties up many businesses and stifles job creation. Nkosi will find a burgeoning private office, which already has more than 50 people – more than Jacob Zuma or Thabo Mbeki had.

Ramaphosa has resorted to beefing up his office as a way to work around his hopelessly ineffectual cabinet. In addition to his growing private office, the office of the presidency has taken on several technical responsibilities that previously fell under various departments. For example, a project office has been created as the Ramaphosa administration looks at big infrastructure projects as one of the ways to boost the economy.

The reason for the growing size of his office is obvious: he has given up managing his employees – the ministers who report to him but carry on driving in different directions. For example, the minister of small business development, Stella Ndabeni-Abrahams, is a career politician who has never run even a hair salon or ice cream shop.

It is Ramaphosa who appointed her to that portfolio last year. The very same Ramaphosa now feels the need to bring a successful business leader into a quasi-technical job at the presidency. Nkosi’s time there will end with a report no one will implement.

The politicians in the cabinet and technocrats under them will carry on with their lives as usual. Also, if Nkosi doesn’t know it yet, he will soon discover that red tape is mostly a local government issue. He will see that more than 200 municipalities have various by-laws that kill innovation. And these cannot be done away with from the Union Buildings.

Bringing in talent from outside the formal ANC structures is not necessarily a bad thing. But the task has to be meaningful, and in a realistic context where the goal is realisable.

If Nkosi’s skills were genuinely required, why not make him minister of small business development? The answer is simple. Ramaphosa does not have the confidence to take on his party colleagues. He can’t even fire someone like Patricia de Lille, let alone Ebrahim Patel.

He would rather create roles that duplicate what has to be done by his cabinet appointees.

The reality of the mammoth task ahead of him was palpable in his speech, in both its content and delivery. He dispensed with the airy-fairy metaphors of the past – like the story of regenerating fynbos that he used to anchor the delivery last year.

Thursday night was about the business of government, as thin as that was.

The unstructured nature of the speech also tells its own story. Ramaphosa moved back and forth on topics and portfolios as if the speech was a product of a last-minute copy-and-paste job – move this paragraph up, move this one down job.

But his analysis of the situation was perfect. The statement that we are “engaged in a battle for the soul of this country” is true. Not many would disagree with that. (I briefly wondered if he didn’t miss his calling as a political pundit.)

He recognises that crime is getting out of hand, but seems handcuffed in the matter. He cannot solve a simple problem regarding the “cold war” between people who report to him: national police commissioner Khehla Sitole and police minister Bheki Cele. He is scared that Cele is too valuable a figure in ANC succession politics to mess around with. And dealing with Sitole means Ramaphosa must stop being Mr Nice Guy.

The last time Ramaphosa was sufficiently angry was in 2018, when he fired Matshela Koko from Eskom.

Now, while he fiddles, his reform agenda is being outpaced by myriad structural and new economic problems. For example, the positive role that state logistics company Transnet plays in facilitating economic endeavours in sectors like agriculture gets dwarfed because the overall economic picture is overwhelmingly negative.

The role of our ports, and ongoing reforms to improve both their operations and management, was one of the pillars of the reform part of Ramaphosa’s address.

We can expect new investments in critical public infrastructure in our ports, thereby saving the state from single-handedly carrying the burden of managing investment-enabling infrastructure.  But all this is buried in political lingo.

For example, Ramaphosa cannot simply say we have to partially privatise our state-owned enterprises (SOEs) because it’s the best model. He is scared of the “radical economic transformation” (RET) faction, which will scream “white monopoly capital” and claim he is selling the family silver to his friends in the private sector.

So, we will do this drip-drip movement, and skirt around this political minefield, without taking on any massive programme.

The problem is not all of Ramaphosa’s making. He is simply the man who has to fix it, as our leader. But that he is alone in the task, or close to that, is very obvious. That is why bringing people to his office is the easiest thing, as he doesn’t have to argue with anyone about it.

SA has never had a leader so short on confidence but so long on pretty words. His methodical approach masks that he lacks the confidence to deal with the political issues that delay progress.

Here’s to another difficult year.

The state of the nation address (Sona) has focused on much needed economic reforms, plans to deal with issues at state-owned entities and support for fledgling businesses such as hemp growers.

In his Sona, the president said legal amendments will enable a competitive market for electricity generation and the setting up of an independent ...
National
4 months ago

Three have been completed, about 10 are progressing, eight have hit challenges and five have missed deadlines
Opinion
4 months ago

MARKET WRAP: JSE slumps as recession fears back in the ...