HCI, we know, is indirectly a substantial shareholder in the “large Transkei and Algoa exploration right”. But who are the others who will benefit from the Wild Coast seismic blasting? 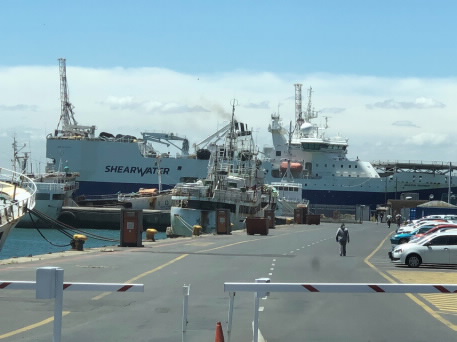 Protests against the seismic blasting off the Algoa (area 7,655km²) and Transkei (area 38,184km²) coasts are gathering momentum, despite ludicrous claims by mineral resources minister Gwede Mantashe that this opposition amounts to “colonialism and apartheid of a special kind”.

Shell, via its 100% owned subsidiary BG International, has borne the brunt of the public anger at the blatant disregard for the environmental risks to sea life and marine ecosystems in the area. It’s no surprise that, in protest, the SA public is increasingly boycotting the purchase of fuel from Shell’s garages.

Less well known is the ownership of the “very large Transkei and Algoa Exploration right”. In part, this is because of the surprising frequency of transactions which alters who owns these rights.

Based on the latest publicly available information, ownership of this right is shared on a 50-50 basis by Shell and Impact Oil and Gas (IOG), a company registered in London. (While IOG has said it plans to reduce its stake to 35%, it has yet to do this.)

However, as a result of a separate transaction, IOG now also owns 90% of the “Area-2” exploration right — a much larger area of 78,708km², and adjacent to the Transkei and Algoa rights.

Johnny Copelyn, CEO of the JSE-listed Hosken Consolidated Investments (HCI), has described this as an extension of the Transkei opportunity.

While Area 2 is in much deeper water, and potentially more costly to explore and extract oil and gas, the risk of damage to marine ecosystems could be far greater. Yet the environmental activists are probably none the wiser about this exploration right. 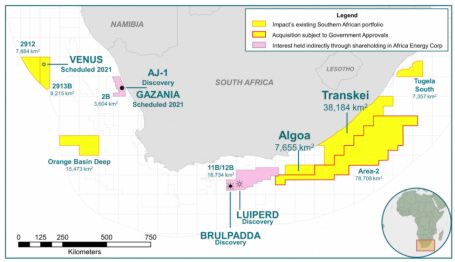 Clearly, there’s a lot going on off SA’s coasts — but the key question now is who owns IOG?

Last month, Business Times reported that HCI was the largest beneficial shareholder. In its annual report to March 2021, HCI confirmed that it owned 49.2% of IOG. Analysis has shown that 46.4% of this is through a wholly-owned subsidiary Deepkloof Limited, which is registered in the Channel Islands, and a further 2.8% of this is through a subsidiary, Niveus AG .

HCI’s holding in Deepkloof — and therefore IOG — has been pledged as security for certain debt facilities. Bizarrely, HCI’s investment in IOG is now more significant than its exposure to Tsogo Sun Hotels. Who would have thought this “oil over hotels” scenario would ever play out?

GRAPH: HCI’s investment in IOG since 2015 is reflected below: 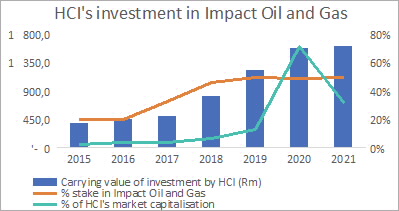 There are currently around 86 shareholders, five of which account for 93% of the shares. At 49.2%, HCI is the largest shareholder and has maintained its shareholding at just below 50%.

My guess is that keeping its shareholding below 50% helps HCI to avoid having to consolidate the exploration business, especially given the offshore registrations of both Deepkloof and IOG.

Interestingly, just under 3% of IOG’s shareholding appears to be held via Niveus AG. Further analysis has revealed that the Toronto-listed Africa Oil Corporation owns around 30% of IOG, and the mysterious Mauritian-registered CAZ Investments Limited owns 6%.

Quite who owns CAZ Investments is unclear. I’d be prepared to bet that the beneficial shareholders are South Africans — but this is no more than a guess.

Clarity around the identity of the remaining 21% shareholding could prove to be very interesting.

Besides Area 2, IOG also has an interest in Block 11B/12B in the Outeniqua Basin off the coast of Mossel Bay — a place where there have been some valuable oil and gas finds of late.

In November 2020, IOG restructured its holding in this block, resulting in it holding its interest via a 36.5% share of Toronto- and Stockholm-listed Africa Energy Corporation. Copelyn is also a director of Africa Energy. But in the process, IOG also restructured its funding of local BEE company Arostyle’s participation in Block 11B/12B, realising a gain of $38m which more than absorbed other exploration losses.

What this meant for HCI was that its 49% share of that $38m gain amounted to R142m — a handy boost in an otherwise tumultuous year.

Amid all the protests, Copelyn has been very quiet. Unsurprisingly, he chose not to respond to the Business Times article.

This is in contrast to his vocal eight-page CEO letter in HCI’s annual report, where he laments the lack of clarity on the legal rights of explorers in SA and implores the department of mineral resources & energy and Energy (DMRE) to enact the Upstream Petroleum Resources Development Bill. The minister, Mantashe, certainly rose to the occasion. This bill replaces the MPRDA for the upstream petroleum industry, which results in Block 11B/12B in the Outeniqua Basin becoming very valuable.

It seems highly unlikely that Shell, IOG (and by implication, HCI) and the DMRE will reconsider what they are doing with the seismic blasting. In the absence of any successful court challenge, the huge vessel Shearwater (see photo at the Cape Town Harbour, below) is unlikely to cease its activities.

One can only wonder how the SA public will respond, once there is greater clarity over the beneficiaries of the Transkei and Algoa exploration rights.

Will there be similar calls for consumers to boycott HCI’s diverse products and services?

And what about the investment management industry? Will they stand up and be counted, and demonstrate the Environmental Social and Governance (ESG) virtues which they market to their clients? What is their response to HCI’s involvement?

The road ahead promises to be a long and controversial one. In the meantime, one can only hope that the damage to the marine ecosystems on the Transkei and Algoa coasts will be limited.

*Butters is an independent analyst