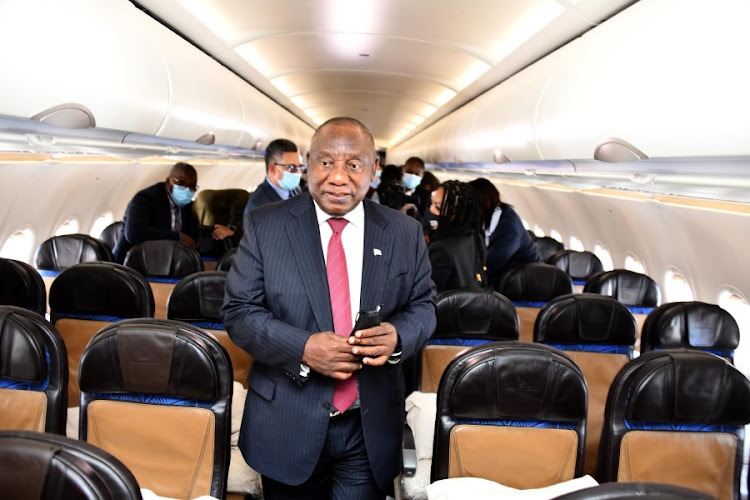 Kenyan President Uhuru Kenyatta was in SA on official business last week. His timing is impeccable. Back in January 2018, Kenyatta visited Jacob Zuma, then still head of state. Zuma was weeks away from a “recall” for new ANC president Cyril Ramaphosa to take over.

It was clear to Kenyatta, and everyone else, that Ramaphosa was the new broom.

Kenyatta travelled to East London, where Ramaphosa had set camp in the first two weeks of the year, preparing for the party’s birthday celebrations and the usual January 8 statement. He met with Ramaphosa and David Mabuza, the new ANC deputy president, and even attended the main rally. The ANC was its usual self, with birthday cakes emblazoned with misspelt words. The party was struggling to pay for the bash, and Ramaphosa and Mabuza’s friends had to chip in. A new aura was setting in, though. The bash started on time, signifying that something new was about to unfold.

Kenyatta was back in SA last week, at a time when the clock is most certainly ticking for Ramaphosa to vacate the Union Buildings.

The outcome of the November 1 elections reverberated through SA as the ANC could not entice partners to form coalition governments in key centres.

As a result, the DA was the biggest beneficiary, having set up minority governments in Tshwane, the capital; Joburg, the economic hub; and Ekurhuleni, the industrial hub. Add to that the fact that the ANC lost control of Cape Town yonks ago.

This is not a pretty picture in the short or long run. It means the ANC has been kicked out of the urban centres and it means it will likely fall below 50% in KwaZulu-Natal and Gauteng in the 2024 elections. (Several people aptly summed up what happened in these elections by saying the ANC had become “a bantustan party”.)

In 2024, Ramaphosa will likely need coalition partners to remain president — and that’s only if he wins a second term when the ANC holds its elective conference in December next year.

The lesson from November’s events is a bitter one for Ramaphosa and the ANC: they failed to entice a willing DA, and were punished by the EFF and ActionSA, which opted to help the DA over the line. The lesson may start with corruption and the government’s obviously poor track record, but it also extends to the ANC’s lack of strategic nous, and its inability to plan for various scenarios.

The fact is, the coalitions that have emerged are all unstable. Many of them can be blown into smithereens by even a mild disagreement among the parties that created them.

For a start, the DA and the smaller parties cheering for it have no common programme — they are all driven by their hatred for the ANC. If the arrangements fail, parties like the EFF will feel the pain, but they have some incentive to make sure the coalitions hang in there until 2024. But they can smell blood, and clearly feel they can push Ramaphosa to the opposition benches if the ANC gets, say, 42% or so in 2024.

The ANC: no plan to hold onto power

Right now, the spectre of the ANC becoming the official opposition in just 2½ years looks real. Granted, the intervening period is likely to be turbulent, but pulling the ANC back from the brink needs an Einstein-like display of strategic thinking — which, not to belabour the point, isn’t something we’ve seen much evidence of in the party.

As long as the ANC has no long-term plan to “manage” the opposition, relate to various stakeholders and bring in credible and skilled young people, it will wither away in a couple of years.

Many in the ANC have long forgotten that their growth in the first decade of democracy included hobnobbing with bloodthirsty apartheid figures (remember when Nelson Mandela kissed Hendrik Verwoerd’s widow, Betsie), collapsing FW de Klerk’s National Party into the ANC, thereby squeezing the DA into the white English liberal corner, and neutralising the Afrikaner right-wing at the same time. That was Thabo Mbeki’s ANC.

By contrast, the current ANC has pretty much no strategy for anything. Even today, as the tables turn, the party seems to have no real strategy for remaining in power. And it would struggle to adapt to the opposition benches: this isn’t a place from which tenders and patronage are dispensed.

The problem for Ramaphosa is that the situation is not just political; it is economic. Considering SA’s economic crisis, the president has no policy levers that can help him entice new voters for 2024, illustrating that his reform agenda is more public relations than anything

For example, how many months does it take to set up a new e-visa regime — a plan he announced in 2018? If he can’t get that right quickly, what are the odds that he and his ANC comrades will see the November elections as any kind of light-bulb moment?

Instead, you’re likely to see them wallow in officialdom in Pretoria. They’ll host incoming visitors and sound grand. But the sinking feeling is more than just a feeling — it’s a reflection of reality.

Kenyatta, and anyone watching the trend of power in SA, will start looking beyond Ramaphosa. When Ramaphosa touches down in Nigeria this week for a visit, the conversations may well revolve around the Omicron drama. But the Pretoria-based diplomats from Nigeria will have long sent diplomatic cables back home, telling their bosses in Abuja that Ramaphosa’s years might be numbered.

Time has run out for the president, but he can still deliver on that early promise if he is prepared to show courage
Opinion
1 month ago

But with vaccination mandates now coming thick and fast, he may not enjoy a good weekend for a long time, writes Tom Eaton
Opinion
1 month ago