Don’t be distracted by the spin … 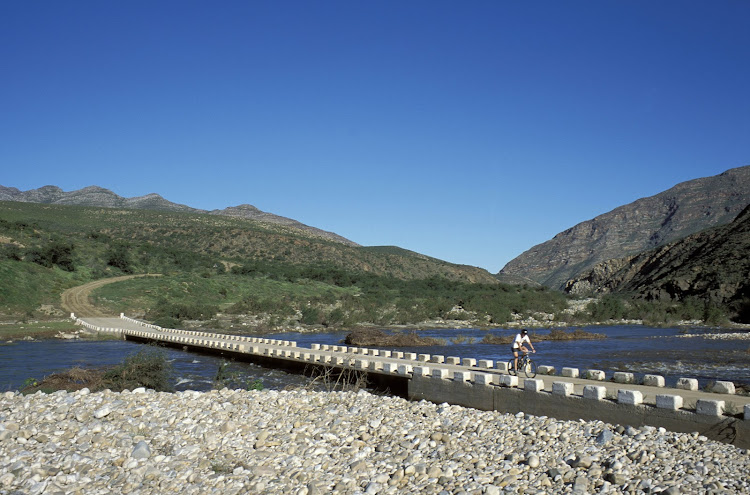 The Gouritz River near Route 62 in Kannaland. The Western Cape town has been hit by fresh controversy. Picture: Rob Maguire/Gallor Images

Luckily, as Ike puts it in his e-mail signature, he contracts Niki Consulting “as a first responder outreach agency”.

Niki Consulting’s website has been under construction since at least November 2020, according to web indexing tool Wayback Machine. A Niki Consulting Facebook page, bearing the company branding, contains this pearl of wisdom from CEO Emmanuel Niekerk, “PhD, honoris causa”: “To avoid damaging misrepresentations is an art & a science and calls for talent & skill. When distorting narratives stack up against your brand, Niki will find a credible way to present the facts in a way that diverts attention; that takes the sting out of the accusations; that undercuts and neutralises your accuser; that stuns the opposition and promotes your brand.”

Niki is like the Ghostbusters of spin. And it’s trying its damndest to sanitise the unholy mess that is the Western Cape’s Kannaland municipal council.

It’s a tough sell, when there’s a convicted sex offender and a fraudster on the executive payroll – as mayor and deputy mayor, no less.

Not to worry, Ike/Niki is on it.

Last week, News24 broke the story about how a coalition of the Independent Civic Organisation of SA (Icosa) and ANC installed Jeffrey Donson as mayor and Werner Meshoa as his deputy. Donson was convicted in 2008 for the statutory rape of a 15-year-old in 2004, when he was mayor of the municipality, and News24 reports that Meshoa is “a convicted fraudster who lost his job as a teacher after being found guilty of sexual misconduct with a pupil”.

“Icosa and the ANC will turn Kannaland around … if only the government is allowed to carry on with service delivery and not forced to spend valuable resources on fending off pugnacious others,” he concluded.

Are we stunned? Did the laboured alliteration distract us? Divert our attention?

Perhaps the message would have undercut the News24 report more convincingly if it hadn’t been a straight copy-paste of a statement by Meshoa, also released by Ike Boss, last month: “Icosa and the ANC will turn Kannaland around … if only the government is allowed to carry on with service delivery and not forced to spend valuable resources on fending off a pugnacious DA.”

Perhaps even Ike Boss, Communications Practitioner, has run out of ideas. If I were the Kannaland ratepayer presumably footing this particular bill, I’d want my money back.

Don’t let the noise distract you from some unpleasant realities: Kannaland is a deeply disturbing example of everything that can go wrong in the power game of coalition politics.

Since 2001, the people of Kannaland have, for the most part, been subjected to the vagaries of political musical chairs. For a brief period in 2001, the municipality was governed by a PAC-ANC coalition. Until the DA and ANC tired of the PAC mayor’s apparent flagrant abuse of the “discretionary” mayoral fund, as Business Day’s Dave Marrs wrote back in 2004.

Enter a short-lived DA-ANC partnership, with Donson as ANC mayor (stint 1). In 2004, the ANC forced Donson to resign after two inquiries into his alleged abuse of the “discretionary” fund. It was, apparently, used in part to subsidise his DJ side gig (rapper stage name: DJ Fantastic) and settle some of his bills.

Four years later he was convicted of the indecent assault and statutory rape that took place during this term in office.

Icosa provincial head Dawid Kamfer, clearly channelling Ike/Niki, has downplayed this, saying Donson was unaware of the 15-year-old’s age. Only, she reportedly testified that when she’d told him her age back in 2004, he’d replied: “When you are 16 we can go out legally.”

It was only in early 2006 that the ANC would expel Donson, who subsequently joined Icosa. That party then went into a coalition with the DA, with Donson being given a seat on the executive council.

The very next year, the coalition was booted out of power when councillors – Donson among them – crossed the floor to join the National People’s Party (NPP). He was duly elected mayor (stint 2) – a position he held onto through his conviction and sentencing, until he was expelled from the party in September 2008.

He won re-election to the council in a by-election the next month.

Just over a year later, towards the end of 2009, he was fired by the MEC for local government “after a disciplinary inquiry found him guilty of interfering in council administration by pressuring officials, abusing money in the mayoral fund and other charges”, the Cape Times reported at the time.

Then came stint 3. With the local government elections in 2011, the ANC went into coalition with Icosa – and installed Donson in the mayoral office. He remained there until 2016, when the ANC and DA partnered up to unseat him – only for the ANC to abandon the DA, hook up with Icosa in late 2020, and put Donson back into the mayoral seat in 2021 (stint 4).

Oh, and the municipality has been under provincial administration since late 2018.

If your head is spinning, you’re not alone.

By my count, the people of Kannaland have been ruled by seven different coalition configurations in the past 20 years, with Donson being returned to the mayor’s office a grand total of four times. The municipality – small, largely poor, with just 40% of the population employed, according to municipal mapping site Wazimap – owes Eskom about R14m, and was R37.6m in debt in 2016, reportedly owing tax and not making payment on employees’ pensions and medical aid.

In fairness, as Ike/Niki will tell you, Kannaland did receive two clean audits under Donson. But the overall situation speaks to an inherent instability when the concern with power trumps that of service.

There are so many things to be angry about when it comes to Kannaland. For a start, how can a man convicted of statutory rape attain office in a country that purports to take gender-based violence (GBV) seriously? Legally, he’s well within his rights: because he received a reduced sentence and fine for the crime, with jail time wholly suspended, he remains eligible for office. But what does that say about how seriously our law takes violence against women and girls?

And what of the political parties lining up at Icosa’s door, gifting Donson the mayorship despite questionable use of a “discretionary” fund meant to benefit the community and his later conviction?

What of the ANC and its pretensions at reform and “zero tolerance” of GBV, hopping into bed with Donson at the drop of a hat?

Don’t tell me the party was in the dark, as acting provincial secretary Ronalda Nalumango told Chris Barron on Sunday. Donson was an ANC man back in the early 2000s; the party was integral to re-electing him to the mayorship in 2011 – despite media reports flagging his conviction. The ANC simply looked the other way because it was politically expedient to do so.

If you google “Jeffrey Donson”, the first hit that comes up is a song, uploaded to YouTube by Icosa. The accompanying image features the party’s pay-off line: We deserve better.

Before we get lost in some pipe dream of ‘smart’ post offices for Cyril’s ‘smart’ cities, let’s just get the mail delivered on time
Opinion
10 months ago
Next Article