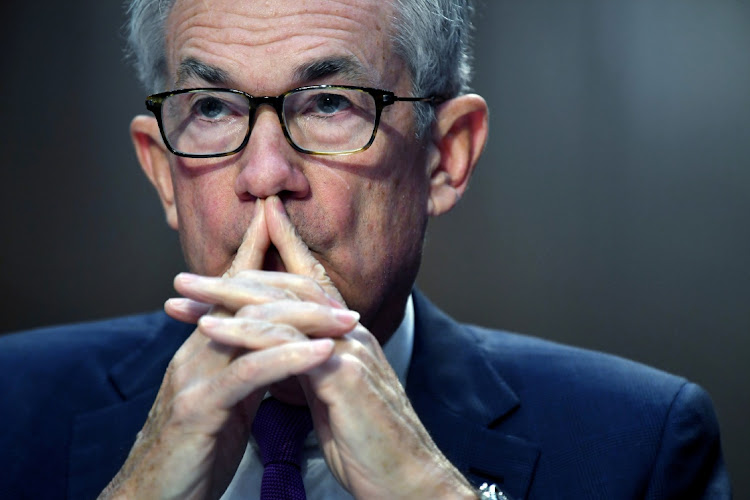 Want to know how to obfuscate your way out of a paper bag?

Forget Fikile Mbalula or Jacob Zuma. The masters of the dark verbal arts still appear to be the US’s central bankers.

Recall Alan Greenspan’s comment: “I guess I should warn you, if I turn out to be particularly clear, you’ve probably misunderstood what I’ve said.”

Or, even better, this classic: “I know you think you understand what you thought I said, but I’m not sure you realise that what you heard is not what I meant.”

On Wednesday, the current chair of the Federal Reserve, Jerome “Jay” Powell, appeared to take his place in the charts of word fog with this line:

“‘Transitory’ is a word people have different definitions for. We took a step back from transitory in this statement to show uncertainty.”

So, now, inflation is “expected to be transitory” whereas, previously, inflation was largely the result of “transitory factors”.

That, obviously, is a big difference in tone, not to mention meaning. I think.

Powell was referring to the spike in prices that have, over the past few months, gripped much of the US and many parts of the world, thanks to the surging costs of oil, shipping, labour, lumber, iron ore, coal, gas, coffee, wheat – you name it.

A few months ago, you might recall, “transitory” became the market’s mot du jour, not to mention its bête-noire. The question being: would rising inflation be fleeting, or here to stay, thus necessitating a firmer hand from the US central bank authority?

That was months ago, and inflation has consistently topped the Fed’s own upper-end target of 2% – by a vast margin.

As the FT says: “Roaring consumer demand in the US has collided with acute supply chain disruptions, causing prices to jump in some sectors for longer than central bankers had anticipated. Rising rents coupled with wage pressures and a severe shortage of workers have given rise to concerns that inflation will prove more persistent than the Fed had initially expected.”

Now, these higher prices would ordinarily lead to a rise in interest rates, not to mention an end to the bond buying that the Fed embarked on last year to cut the cost of capital to help business through a once-in-a-century pandemic. As of Wednesday night, the Fed has decided to scale back its $120bn monthly bond-buying programme. It will cut its purchases of treasury securities by $10bn a month, starting this month, as well as $5bn worth of mortgage-backed securities. That should end this extraordinary stimulus package by June 2022.

That was largely to be expected, but what remains a key unknown is whether, or when, the Fed will hike interest rates.

And there, a straight answer from Powell was as elusive as the SA electorate in this week’s elections.

The market appears to think so – it has priced in two interest rate hikes next year.

According to Bloomberg, “money-market derivatives show about 55 basis points of rate increases by the end of 2022. The first hike is seen coming around July, with about a 70% chance it comes the month before.”

Some say that those rate hikes would be too much, too soon, arguing that it’s not just inflation that the Fed has to keep an eye on but the labour market, which is still recovering from the job losses wrought by the pandemic. The Fed, after all has two jobs: keeping prices stable and achieving maximum employment. Sasfin Securities’ David Shapiro told me on BDTV’s Stock Watch on Wednesday night that “the worry is that we’re just starting to get out of this, we’re starting to grow and feel confident – any smell of a rate hike will set us back”.

Also on the show was FNB Wealth & Investments’ Wayne McCurrie, who said that “no central bank in the world is proactive – they’re reactive”.

Still, said Powell on the way forward for interest rates: “We think we can be patient. If a response is called for, we will not hesitate.”

Commoners like me wonder at this cat-and-mouse game between the market and the monetary authorities. Why can’t the Fed state its intentions, loud and clear, instead of forcing the market to interpret its statements for clues?

But where’d the fun – not to mention an entire industry of financial professionals – be in that?

Talevi is editor of the FM’s Money & Investing section

Newspapers from both ends of the spectrum are presenting his trade as something sinister, but it isn’t
Opinion
8 months ago