SARAH BUITENDACH: Hell has nothing on these curses of life

A damnation-worthy list of life’s vexations, joy vortexes and antivaxxers 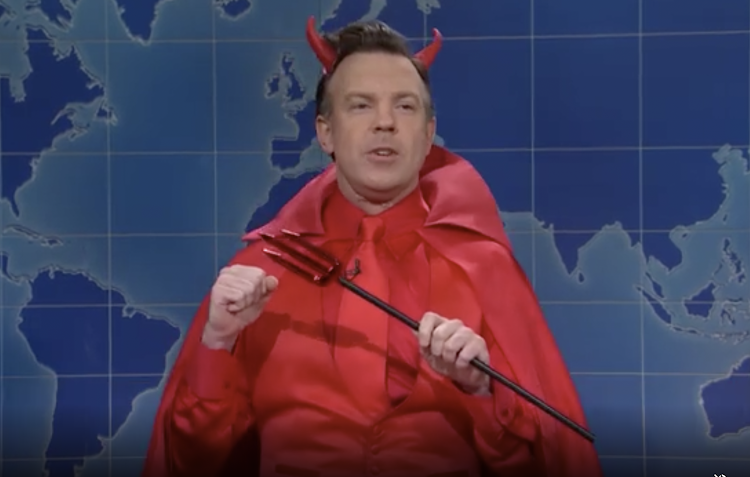 Jason Sudeikis as The Devil on Saturday Night Live.

You probably know Jason Sudeikis for his role as the incandescently kind Ted Lesso, in the hit Apple TV+ series of the same name. His portrayal of a US football coach hired to head up a Premier League British soccer team has been the perfect counterattack to corona doom, and earned the US actor an Emmy.

Long before Ted bicycle-kicked Sudeikis’s star into the stratosphere, he was known for a decidedly less angelic part. He played The Devil.

For 10 years, Sudeikis was a cast member of the US skit TV show Saturday Night Live (SNL). During that time he’d appear as a caricature Prince of Darkness – three-piece red satin suit and fork included – satirising how current world events made hell seem cool by comparison.

As SNL’s guest star this past weekend, Sudeikis reprised Satan, lampooning everyone and everything – even claiming responsibility for inventing global warming, bitcoin and vaping. He ignored a call from Prince Andrew – “he’s blowing my phone up all the time with all these pics coming out of him, me and J Eps”, he exclaimed with a drawl. And then, hilariously, he denied having anything to do with the far-right conspiracy movement QAnon. “Those guys are crazy,” El Diablo added.

Old Nick’s late-night admission about what he’d been fashioning was impressive, but, I thought, a tad abridged. Sure, he owned up to the botched “Instagram Kids”, deadly storms and pop-up ads that take up the entire screen as you scroll, but what about life’s other vexations, joy vortexes and antivaxxers?

Taking a bit of liberty, I’ve added to the man down below’s damnation-worthy list. And, yes, this kind of snarky stunt is more Lucifer than Lasso, but I’m sure you’ll agree with my additions. They are, unranked:

What would you add to the list? Send me your ghastly and ghoulish best.

Princes are the poster kids for inherited wealth and poor genetics, playboy behaviour and getting away with all sorts of things – just think of ...
Opinion
8 months ago

Instagram influencers and the vain might love a video call, but for the rest of us, the continued glimpses of our verlepte hair and weird involuntary ...
Opinion
8 months ago

With a top steak or schwarma, and a scintillating view of a car park, what’s not to adore about the city’s distinctive restaurants?
Opinion
8 months ago
Next Article