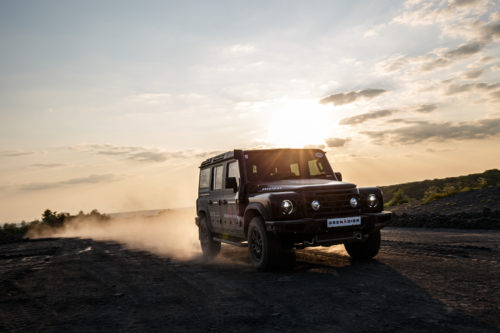 If the shape of the Ineos Grenadier reminds you of the old Land Rover Defender, you’re not imagining things. The Defender’s transformation into a slick, virtual twin of its Discovery stablemate has left a gap in the market for an old-fashioned, aggressive-looking 4x4 that stands out from the sameness of most competitors.

UK billionaire Jim Ratcliffe, founder and CEO of the multinational Ineos chemicals company, was quick to fill the gap. Keen to develop the ultimate “utilitarian” 4x4, he told Ineos Automotive designers to create a “capable, durable and reliable 4x4 to handle the world’s harshest environments”.

He also wanted it to look the part, which is why the Grenadier, named after Ratcliffe’s favourite London pub, is deliberately old-fashioned in its appearance.

The vehicle, with a starting price just shy of R1.4m (the Defender comes in at R1.1m), is due for launch in July 2022. SA customers who have already expressed interest started placing orders this week. Everyone else must wait until October 14. Prototype vehicles will arrive in SA in the next few days for potential customers to experience in Joburg, Durban and Cape Town.

Tim Abbott, the former BMW SA CEO who is now Grenadier’s head of sales and marketing for Sub-Saharan Africa, hopes for 200 SA sales in 2022, rising to 1,000 by 2026. He predicts similar numbers in the rest of the Sub-Saharan region.

With an estimated personal fortune of $15.7bn, according to Forbes magazine, and as head of a company that last year reported turnover of $91bn, Ratcliffe can afford not to cut corners. By the time the Grenadier, which will be built in a former Mercedes-Benz plant in France, comes to market, prototypes will have undergone 1.8-million km of testing offroad and on tar.

Global aftersales head Steve Graham says testing has taken place in different conditions around the world, including southern Africa. “Ratcliffe has said specifically he wants this to be a vehicle for Africa,” he says. Besides for private buyers, Abbott says the Grenadier can be adapted for game drives and offroad emergency services. He says the company is talking to the Botswana defence force about potential sales.

The Grenadier’s utilitarian nature extends to plugs in the rubber flooring to drain water, and hard-wearing seats that can be hosed and wiped down. For customers planning to spend most of their time in the concrete jungle, carpets and leather seats are available. Despite its looks, the vehicle will be equipped with the latest in safety and 4x4 technology. Power will be supplied by six-cylinder BMW petrol and diesel turbo engines.

One day Ineos Automotive may produce a version powered by hydrogen fuel cells. The Ineos chemicals company is the world’s biggest producer of hydrogen, and Korean car company Hyundai is partnering in a project to create alternative power systems.

Abbott says major SA dealer groups have signed up to open three Grenadier sales and service showrooms, in Joburg/Pretoria, Durban and Cape Town. All will have offroad test tracks nearby. Because it makes the engines, BMW has been asked to make dealerships available to service vehicles.

In addition, says Graham, the worldwide Bosch chain of vehicle service centres, which includes operations in SA, has agreed to service Grenadiers. Some other workshops may also be approved. The aim, says Graham, is for owners to be within 50km of an accredited workshop – though that may not be feasible in some parts of SA.

For those who run into mechanical problems during journeys in remote parts of Africa, Ineos is appointing “flying spanner” partners who will drive and, if necessary, fly to vehicles for on-the-spot repairs and rescue.  Where parts are not available in SA, Graham says Ineos plans to offer a 24-hour delivery service.

Abbott says Ineos is already talking to potential sales and service partners in Namibia and Botswana. Other countries where it hopes to sell vehicles include Angola, Kenya, Tanzania, Ghana, Nigeria, Senegal and Ivory Coast. Most of these countries, and several of their neighbours, have Bosch service centres.

The locally made Ranger is built primarily for export, to over 100 markets around the world
Opinion
2 months ago

Financial pressure has driven some consumers from premium brands to cheaper cars, which often offer the same quality and features
Opinion
4 months ago