We can’t banish Covid-19. But we can end the pandemic with vaccinations 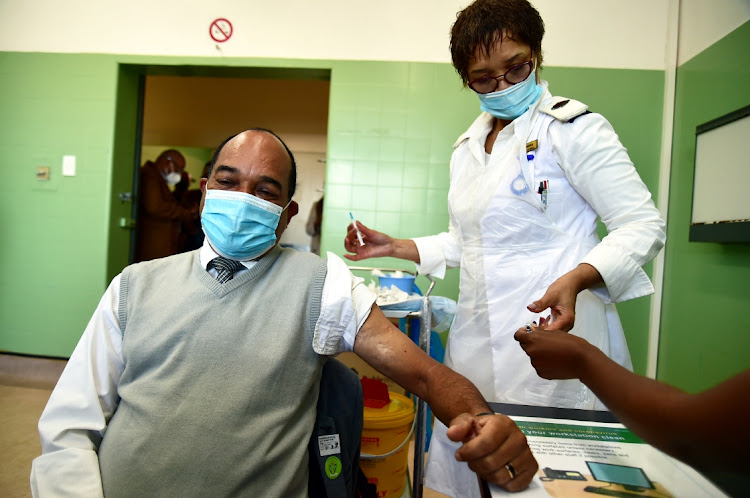 A nurse administers the Covid-19 vaccine to a man at the provincial hospital in Gqeberha. Picture: EUGENE COETZEE

South Africa’s daily rate of new infections has been on a steady decline for some time. But, truth be told, a fourth wave is probably just on the horizon – and a fifth, and a sixth, and a seventh. This is true of every country in the world.

These waves could be instigated by various phenomena. Perhaps a “super-spreader” event or two, or the arrival of a new and more contagious variant.

Thanks to a successful vaccination programme, smallpox was eradicated worldwide by 1977. But as leading American science journalist Christie Aschwanden recently argued, Covid-19 is unlikely to disappear in the same way. Current vaccines just don’t provide enough protection against infection to provide herd immunity. They provide substantial protection against infection as well as severe illness, but they aren’t bulletproof, and reinfection is a reality.

What does this say about the pandemic?

Epidemics do not require the total eradication of the disease to end. More important than the existence of the disease, is the harm it is causing the population. But will the harms of Covid-19 ever be low enough? Will the epidemic ever end?

In short: Yes, it will - so long as enough people get vaccinated and vaccine efficacy continues to protect people from severe illness with new variants. Although exactly what percentage of the population need to be vaccinated to achieve this is hard to say at this stage.

This won’t happen with a bang. What we can expect to see is a fading-away. Waves might well still continue, and even increase in magnitude. But fatalities will reduce and severe illness become less common as vaccination rates improve.

As medical historians Erica Charters and Kristin Heitman put it, epidemics end once the disease is:

Whereas diseases become epidemics and pandemics through purely biostatistical means – a matter of how many people are infected and where those people are – they end once the biomedical harms they cause are sufficiently reduced. In other words, when relatively few people are getting seriously ill.

There are currently multiple vaccines that are extremely effective in reducing the effects of the virus from a life-threatening disease, to (for the vast majority of people) nothing more than a mild cold.

Even in the face of further waves of infection, were the entire population fully vaccinated, the biomedical harm the disease would cause would be (relative to many diseases we are already dealing with) sufficiently low to call an end to the epidemic.

This would mark the point at which governments could stop implementing many of the economically and socially devastating non-pharmaceutical interventions.

How far down the road are we?

The answer to this question depends on which country you’re living in.

If you are in Europe, you’re closer than those of us living in an African country.

Despite the initial shortages, South Africa currently has more than enough vaccines to satisfy demand. Initially, the slow roll out might have been blamed on supply issues, but now the country faces one big problem: not enough people are choosing to vaccinate.

The scourge of disinformation and anti-vax propaganda has people afraid to accept these life-saving vaccines. All too often, this ends in tragedy.

A call to arms

Unfortunately, it is quite natural to listen to anecdotal evidence and take it seriously – to think that because “Uncle Richard” took the vaccine and then had a heart attack, the vaccine caused the heart attack. But this is not good evidence of a causal relationship.

Evidence-based medicine is routed in large-scale randomised trials, with many thousands of people participating (and now, many millions have taken the vaccine).

Both the trials and now large-scale roll-outs have conclusively shown that vaccines massively reduce people’s chances of hospitalisation and death, and further, that by all standard measures of pharmaceutical safety, that they are not harmful.

We do not advocate for legally mandated vaccinations (or indeed for any legally mandated medical treatment). But we must come to terms with the fact that Covid-19 is probably here to stay, and that the only way to end this epidemic is to stop the enormous harm it is doing.

The only way to prevent healthcare systems being periodically clogged up with suffering Covid-19 patients, and to end this epidemic, is to ensure that as many people as possible are vaccinated, and as soon as possible.

This article first appeared on The Conversation Africa.

The fund’s annual report shows ‘no wastage or misappropriation’ of billions collected from SA corporates, the government and private citizens
National
8 months ago
Next Article

1.
DAVID FURLONGER: Volvo’s hybrid-electric XC90 ...
Opinion
2.
ANN CROTTY: A school is built, at last
Opinion / Boardroom Tails
3.
JUSTICE MALALA: Zondo was worth that R1bn — and ...
Opinion
4.
CHRIS ROPER: Can SA give peace a chance?
Opinion
5.
CARMEL RICKARD: The perils of glossing over ...
Opinion / In Good Faith

1.
DAVID FURLONGER: Volvo’s hybrid-electric XC90 ...
Opinion
2.
ANN CROTTY: A school is built, at last
Opinion / Boardroom Tails
3.
JUSTICE MALALA: Zondo was worth that R1bn — and ...
Opinion
4.
CHRIS ROPER: Can SA give peace a chance?
Opinion
5.
CARMEL RICKARD: The perils of glossing over ...
Opinion / In Good Faith

CA Sales only the second listing on JSE for the year