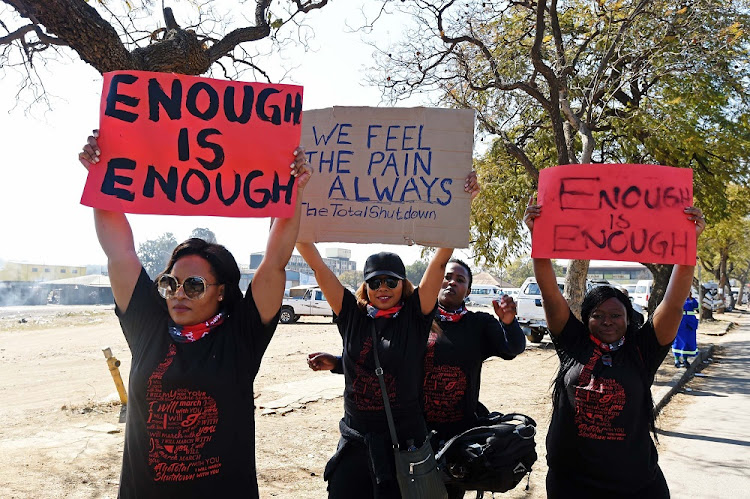 Women hold up placards during their march against gender-based violence in Pretoria. Picture: SIYABULELA DUDA

The picture is haunting. Siphokazi Booi’s face is puffy; her cheeks are bruised; her eyes swollen almost shut; the whites of her eyes beaten bloodshot. It’s the handywork, it seems, of her partner, who was arrested for her assault.

That was last month.

On Sunday afternoon, residents of Mbekweni, in Paarl, made a grisly find: the body of a woman, burnt beyond recognition, stuffed in a wheelie bin near the train tracks. All evidence so far suggests it’s Booi.

On Wednesday, her partner Sithobele Qebe appeared in the Paarl magistrate’s court for her murder. He’d been out on bail, pending the October 4 start of his trial for her alleged assault.

That day, there was another man in court to face murder charges too. In that case, Yibanathi Macgyver Ndema reported his wife Noluvuyo Ndema-Nonkwelo, an HIV/Aids counsellor, missing in July 2019.

For two years, Ndema-Nonkwelo’s father searched for his daughter. There were times he thought her body had been found. As the Daily Dispatch reports, he hired private pathologists to conduct DNA tests on blood-stained clothes, and he wrote to the National Prosecuting Authority bemoaning delays in DNA test results that would prove an unidentified body wasn’t his daughter’s.

Last Monday, however, the police found what appear to be Ndema-Nonkwelo’s remains buried underneath a strangely positioned bathtub in Ndema’s Butterworth home.

And in a separate case last month, Nosicelo Mtebeni’s dismembered body was found in East London — one of five women from the Eastern Cape town of Matatiele to have been murdered in the same week, mayor Momelezi Mbedla reportedly said at her funeral last weekend. Her partner, Aluta Pasile, has been charged with her murder.

It’s a never-ending rollcall of the dead.

The tip of the iceberg

There’s an awful, stomach-churning regularity to reports of gender-based violence (GBV) and femicide in the media, the resultant public outcry about the scourge, and the government’s handwringing impotence in the face of it. But this belies the true scale of the problem.

A project by health and journalism outfits Bhekisisa and Media Hack shows that police recorded 5,466 murders of women over the age of 18 in the two years leading up to April 2020. Of these, just 233 (4%) were reported in the English-language media.

In 2018, the government finally seemed to take some concrete action to address the problem. After thousands of South African women took to the streets to demonstrate against GBV in August, President Cyril Ramaphosa convened a presidential summit on GBV.

The summit was held in November that year, and laid the groundwork for the National Strategic Plan (NSP) on GBV & Femicide, 2020-2030.

But progress has been glacial. An interim steering committee delivered the NSP smartly enough, meeting its October 2019 deadline. But it was only approved in March last year.

From there, the NSP was supposed to be driven by a national GBV council. Only, that has yet to be constituted. Minister in the presidency Maite Nkoana-Mashabane finally announced nominations for the council board in October last year. A few weeks back she promised the council will be up and running by the end of December.

And that’s all the progress there has been — three long years since that summit.

In the meantime, the Commission for Gender Equality is itself uncertain if the council exists or not, if this report in the Mail & Guardian is anything to go by. In April, the commission pointed out that the government had missed 60% of the targets in its Emergency Response Plan (the precursor to the NSP). And in a progress report to the portfolio committee on women, children & people with disabilities this week, the commission said only 17 of 81 targets relating to GBV have been achieved so far.

As Bhekisisa reported in April, activists and volunteers have largely kept the process going.

All of which doesn’t exactly scream “political will” from the government, and from Nkoana-Mashabane’s department in particular.

It’s not that there haven’t been some improvements. For example, R21bn has been set aside over three years to implement the NSP, R128m has been raised from the private sector, there’s finally some movement on legislative amendments around GBV, 32 regional sexual offences courts are operational, 12 buildings have been repurposed as shelters, and “police have been capacitated with sexual assault evidence kits”, the government said last month.

It’s just that it’s been nearly three years since that presidential summit, and it’s only now that all SA’s police stations are finally equipped to collect the relevant evidence in the case of sexual assault.

And that’s not even much good at this stage, given the backlog at the forensic labs.

In July last year, 31,000 GBV cases were on hold, pending the processing of forensic evidence. By May this year, there were 82,000, according to police minister Bheki Cele. That was a total backlog of 208,291 cases. By the end of August, Business Insider calculated the total to be close to the 238,000 mark.

In the Western Cape alone, the backlog on DNA testing is holding up 36,000 GBV cases, the DA found after oversight visits to the Plattekloof forensic laboratory. Among the reasons for that, the DA’s Gillion Bosman said, is that “the contract for the maintenance of the DNA processing machines ended in May 2019 and has not been renewed”.

In May, Cele blamed budget cuts for this, saying a lack of resources had affected the purchase of forensic supplies, led to poor contract management, and created a shortage of trained forensic personnel. But despite his assurance that various interventions would take place — including making an extra R4.2m available to buy evidence kits — the labs just don’t seem to be getting on top of the problem.

Or, at least, they’re not doing so anywhere near fast enough. By Business Insider’s estimate, at current processing rates, the backlog may only be cleared by January 2023.

Perhaps some of that R21bn should go towards bolstering forensic capacity. After all, among the many interventions required to combat GBV in SA is a functioning criminal justice system, which would ensure perpetrators are held accountable for their actions. But that’s not possible in the absence of forensic evidence.

You can’t help but feel that if the government were really serious about the problem, it would find the resources to address the shortfalls, and ensure proper implementation. There would be more action.

Until then, news headlines will continue to loudly proclaim the names of the growing list of the dead. The 4% that make it into the media, that is.

SA is rushing to roll out its first national plan to fight gender-based violence. But as bureaucracy stalls progress, violence continues. And there ...
Features
1 year ago

DEEPA VALLABH: Will the new GBV bills bring SA a step closer to ending the scourge?

The real test is in carrying out the enforcement provisions contained within the bills, and enforcing them properly requires a monumental shift in ...
Opinion
10 months ago

Some proposed changes welcomed at public hearings, but warnings sounded on risk of unintended consequences
National
1 year ago

LEBOGANG MOKOENA: A tale of SA policing – and why we can’t crack GBV cases …

Our law enforcement officials, it seems, are more obsessed with people jogging before curfew than they are with women being stabbed
Opinion
2 years ago
Next Article