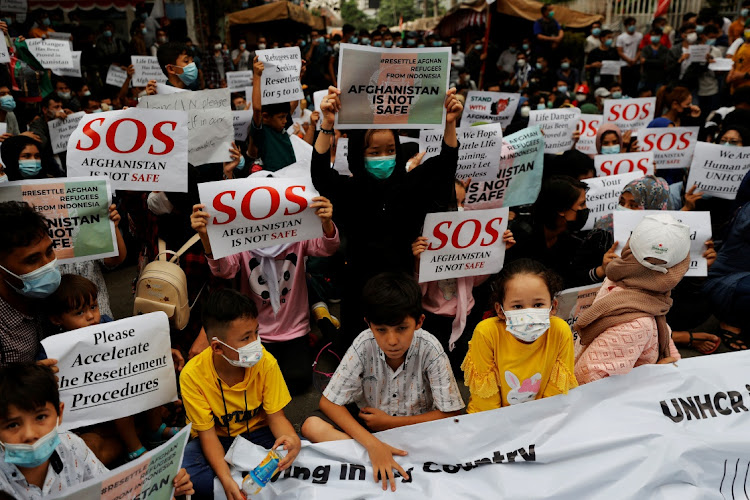 Afghan refugees ask for justice and resettlement during a rally outside the UN Refugee Agency UNHCR's office in Jakarta, Indonesia. Picture: REUTERS/Willy Kurniawan

I’m not sure what’s more depressing: those who got jabbed on the first day of the rollout of vaccines for SA’s 18- to 34-year-olds last week, or their equivalents 8,500km away watching the Taliban roll into Kabul.

You’ll be pleased to know I’m not thinking like this because I’m embroiled in some maniacal antivaxxer conspiracy, in which a vaccine that is entirely safe is dressed up as some nefarious patch into Microsoft’s HQ. Rather, it’s what both these scenarios say about the prospects for the youth.

The easy one, of course, is Afghanistan. There, we know things don’t look good.

Since the ideologically primitive zealots of the Taliban recaptured Kabul a few weeks ago — after the Afghan president bailed and the US souped up its evacuation — there’s been a lot of talk about what will become of the country’s youngsters. It’s a critical question, since the average Afghan is just over 18, and 63.7% of the population is under 25.

Critically, these are kids have either never lived under Taliban rule, or their memories of its extremist sharia rule are scant.

As seasoned English journalist Christina Lamb wrote in The Times: “Nowhere I have reported from has changed as much in the past 20 years as Afghanistan.”

Lamb writes of a country which, when she first visited in 2001, had no phone lines, no running water and no conception of buildings higher than four storeys.

But the modern Kabul she describes is one where there has been a warp-speed acceleration in progress and normality. Kabul today heaves with shopping malls, espresso bars, mobile phones and university graduates. Young women work, and do sport.

Some of these youngsters are holding out hope for a “Taliban 2.0”, which recognises that the regime needs the support of the modern generation, and so will be more accommodating of their lifestyles.

But most people are steeling themselves, having heard Taliban commander Waheedullah Hashimi say: “There will be no democratic system at all … it is sharia law and that is it.”

And already the decimation has started. There was the case of the 19-year-old soccer player Zaki Anwari, who fell to his death from the evacuating US military plane he’d tried to stow away on. And the all-women robotics team, who’ve fled to Qatar because, well, the Taliban aren’t keen on women being educated, never mind excelling and competing in something so technical.

Naveed Noormal, a 30-year-old former Afghan diplomat and Fulbright scholar who now lives in the UK, told The Atlantic that for those like him, who grew up after the Taliban’s fall, his generation’s “plans and goals for the country feel like nothing but a dream now”.

So how does this relate to SA’s buoyant kids, who are now feeling “the vibe” after they got vaxxed?

At least in Afghanistan, the prospects are clearer: with one cock of a Kalashnikov, those kids have had their freedoms and opportunities reduced to dust.

Intuitively, you’d have to say the outlook for SA’s youth seems rosier. But really, in SA we’re just masking an insidious decay in prospects with TikTok videos of Pfizer celebrations.

As it stands, 46% of South Africans between the ages of 15 and 34 are unemployed, and while in Afghanistan any wholesale departure of the Taliban would immediately improve the prospects of this age group, there’s little tangible sense of how the trajectory for SA’s youth will improve.

This generation has been at the mercy of a woeful education system and anaemic economy. And all they have to rely on are politicians so distracted by infighting and personal gain that they wouldn’t recognise a jobs plan if it was tattooed on the bonnet of their BMW.

Our kids, full of ideas and potential, should be raring to start their working lives. Instead, even those with degrees count themselves lucky to get jobs as cashiers.

Is it any wonder that with time on their hands, and mounting desperation at the status quo, talk grows of insurrection?

Make no mistake, the situation in Afghanistan for the youth is deeply depressing, But in SA, the plight of our youngsters seems somehow more hopeless.

The despots in Afghanistan are cracking down on everyone, erasing rights on a whim. But in SA, it’s more insidious: try having all the rights and freedoms that should enable you to live fully-realised lives but none of the opportunities to make that happen.

What is shocking, given the experience of national security and foreign policy team Joe Biden has assembled, was the sheer failure of the execution
Opinion
9 months ago

With a vast country to run and disparate groups to placate, a Taliban government will rely even more on communications
Opinion
9 months ago

EDITORIAL: Look at all the options to tackle the ...