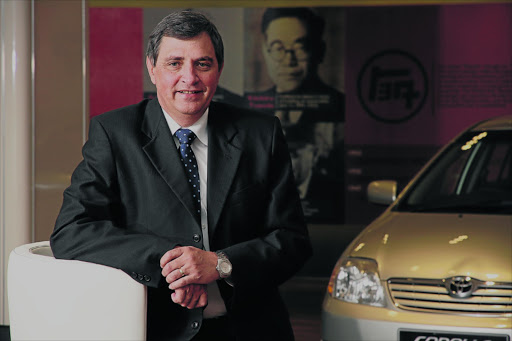 There’s a hoary old story about an English tourist visiting a Native American reservation in the US. On hearing that a local elder claims he can correctly answer any general knowledge question, he puts him to the test.

What was the score in the 1965 English FA Cup final, he asks, and who scored the winning goal? Without hesitation, the elder replies: “Liverpool beat Leeds United 2-1 and Ian St John scored the winner in the 117th minute.”

The visitor returns a few years later and, on seeing the elder, approaches him with what he believes to be the traditional local greeting, raising his right hand and exclaiming “How!”  The chief responds: “With a header from seven yards.”

Toyota SA chair Johan Van Zyl, who died at the age of 63 of Covid-related complications last Friday night, had a similar capacity to remember – and carry on – long-gone conversations.

In April, shortly after he’d retired as CEO of Toyota Europe, I saw him at an event in Durban. I was allotted 15 minutes to interview him afterwards but as soon as we sat down, he continued a personal conversation we’d started the last time I saw him, a couple of years earlier. As always with Van Zyl, there was lots of laughter.

I ended up doing the actual business interview a few days later at Toyota SA’s Joburg HQ, where he had his office.

Toyota SA president Andrew Kirby says Van Zyl, commonly known as “The Doc”, “will be remembered most for his humanity, his ability to remember the name of every person he came into contact with and his self-deprecating sense of humour that put everyone at ease”.

Kirby and Matt Harrison, Van Zyl’s successor as CEO of Toyota Europe, both speak warmly of his mentorship and of someone “who had a story to share on any topic”.

Some of the stories I heard Van Zyl tell would not pass today’s self-appointed politically correct censors. If he trusted you not to repeat them, he could also be surprisingly indiscreet with revelations about people in the business world. But it was all said gently, without malice.

Van Zyl’s likeable private persona belied the toughness required to succeed in the global motor industry. He joined Toyota SA in 1993 as sales and dealer network director. When Toyota Motor Corp of Japan bought control from the  Wessels family in 2002, it appointed him president and CEO.

Further elevation followed. In 2009, he became a managing officer of the global Toyota group; in 2013, CEO of Toyota Africa; and in 2015, CEO of Toyota Europe. Incredibly, all these appointments happened while he still headed Toyota SA.

Simultaneously, he was also president of the National Association of Automobile Manufacturers of SA. One of the architects of modern SA motor industry policy, he helped create the 2013 automotive production and development programme, which last month turned into the SA Automotive Masterplan, which will run to 2035 and is intended to double production and employment.

At first, Van Zyl believed he could manage all three Toyota CEO jobs at once, but after months of continuous travel between Brussels, Tokyo and Joburg, the strain began to show. Kirby was given charge of Toyota SA (Van Zyl became chair) and Tokyo took direct control of Toyota Africa, leaving Van Zyl to concentrate on Europe and its eight Toyota factories. During his time there, he reversed previous European market losses, taking Toyota 2019 sales back to more than 1-million for the first time in a decade.

The motor industry was his “day job”. He also took a broader view of SA’s economic needs. He was a co-founder, with former politician Roelf Meyer, of the Public-Private Growth Initiative, intended to create partnerships between business sectors and government. More than 20 sectors have signed up to the initiative, based on Japan’s post-war economic reconstruction plan.

He recognised that if SA was to successfully reindustrialise, it would need qualified leaders, so, as Toyota SA chair, he successfully pressed for creation of a business school specialising in manufacturing leadership. The Toyota Wessels Institute for Manufacturing Studies opened in 2018 with a manufacturing MBA among its offerings.

Van Zyl’s experience of the global shift to emissions-free motoring (several European countries will outlaw petrol and diesel vehicles in the next decade) made him a natural choice to chair a government advisory panel on green energy policy. Its purpose is to suggest ways to “reindustrialise the country and become an exporter of cost-effective green hydrogen to the world”.

He was appointed in May by trade, industry & competition minister Ebrahim Patel, at about the same time Patel announced that the government was finally ready to consider incentivising the local manufacture and sale of electric vehicles. Later this year, Toyota SA will build a hybrid car, using dual petrol and electric motors..

Shortly after returning to SA in April, Van Zyl said his priorities as Toyota SA chair were to prepare the company for a technologically revolutionary future, and use those learnings for the broader SA economy.

Sadly, he never got the chance.

Springs-born Van Zyl rose through the ranks of Toyota. As he retires from his international roles, Mark Smyth spoke to him about his career and future
Life
6 months ago
Next Article