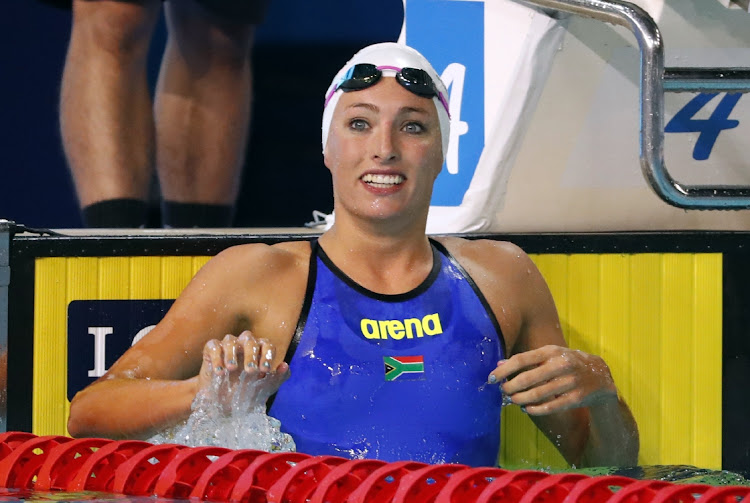 It’s less than a week into the Olympics, SA has just secured its first two silver medals courtesy of swimmer Tatjana Schoenmaker and surfer Bianca Buitendag, and I’m already an expert on all the sporting codes that have participated so far.

I watch zero gymnastics, swimming or hockey for four years and yet, within minutes of the first whistle of this global jamboree, I can be heard pontificating on the intricacies of team work, personal best times and the excellent transitions between parallel bars like I actually know what I’m talking about.

A WhatsApp group I’m on with three friends reads like a feed of official commentators with years of experience, real insight and – for extra points – dexterity, as we effortlessly switch to expound on whatever happens to be on TV.

We’re all longtime armchair Olympics enthusiasts, but, hell, am I glad that we get to do this with Tokyo finally. Sure, it’s a year later than planned and sans spectators, but it’s a delicious distraction from the real world.

Yes, holding out for a hero or two from Team SA is the main event, but either way, watching such fine athletes, irrespective of origin, is undeniably worth the DStv subscription.

Then off the pitch and track, and beyond the 1,824 drones that lit up the sky at the opening ceremony, this shindig in Tokyo also offers a cornucopia of trivia and scandal worthy of a couple of gold gongs.

For example, did you know that there is a Refugee Team in Tokyo? It first took part in the Rio games, and this year is made up of 29 athletes who’ve fled their own countries (like South Sudan and Syria) and are now training in other parts of the world. The stories of how they took refuge are astounding – never mind how well they’ve done in their respective sports.

It’s also intriguing how only a scattering of new structures, including the Japan National Stadium, where the opening ceremony took place, were specially constructed for Tokyo 2020. Rather, the city has repurposed buildings. These include – and this is a point of great pride for the Japanese – those that were erected for the 1964 Tokyo Olympics.

Conjure up images of our own ghost town 2010 Soccer World Cup venues, and you get a sense of how smart that strategy really is. As it is, Japan’s government even nixed the original proposal for the Japan National Stadium – pitched by the late architect Zaha Hadid. It felt it would cost too much, so instead went for a seriously tapered-down and vastly cheaper version by local architect Kengo Kuma.

Taking repurposing even further, all 5,000 of the medals being dished out in Tokyo were made from old electronic equipment. As News24 explained: “6.2-million old mobile phones were donated by Japanese electronics shops, schools and the general public, who put their goods in yellow donation boxes at post offices and on street corners.”

And as for the cauldron and Olympic flame, lit at the start of the games, it was created by Japanese designer Oki Sato using “green hydrogen” which doesn’t produce greenhouse gas.

Still, given the crazy large carbon footprint required to transport, house and maintain everyone involved in a gathering of this magnitude, you can see why some believe these few elements of recycling amount to little more than greenwashing.

Actually, that’s just a smidgen of the bad press this Olympics has had to deal with.

It culminated, hours before the whole thing started, in the opening ceremony’s director, Kentaro Kobayashi, being given the boot over a joke about the Holocaust that he’d made during a stand-up comedy gig in the 1990s. This after both the head of the games’s organising committee and its creative director stepped down for making sexist remarks earlier in the year.

And then there are the beds. Critics complained loudly a few weeks ago, when they got wind of the sustainable cardboard beds that the athletes would be forced to sleep on.

The rumour was they’d been fashioned so they couldn’t withstand the weight (or movement) of more than one person. The world’s response: no sex in the Olympic village? The Olympians had already sacrificed so much because of the pandemic!

Only, that wasn’t true. Those flat-back recyclable numbers are plenty strong – though I can’t imagine how they’d have stopped a bunch of robust, young and dedicated sports people with access to a floor and walls anyhow. They are, after all, called athletes for a reason.

Here’s hoping that, whether it be in the pool or the paper bed, they have all the success they deserve.

In many places communities came out to protect their shopping centres from looters last week. Why do they feel so strongly about their retail ...
Opinion
10 months ago

There was a sluggish response by the over-60s to the vaccine rollout. But when the queue opens this week for those aged 35 to 49, expect a rush
Opinion
10 months ago

SARAH BUITENDACH: Oh, to be vaxxed, waxed and relaxed

Be it pilchard pie, with a strawberry Steri Stumpi, no-one can judge your comfort food choices. Here, the country’s best chefs reveal what causes ...
Opinion
11 months ago
Next Article

Cyclists gear up for war of attrition on Mount Fuji course

Cyclists gear up for war of attrition on Mount Fuji course