There was a sluggish response by the over-60s to the vaccine rollout. But when the queue opens this week for those aged 35 to 49, expect a rush 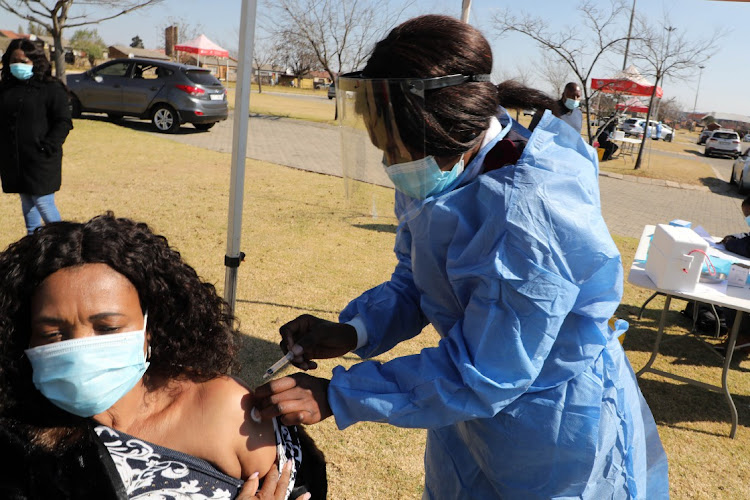 A teacher receives the Covid-19 vaccination at a primary school in Pimville, Soweto. Picture: SOWETAN/ANTONIO MUCHAVE

I had wanted to warn the department of health, and all the other guys involved in dishing out the jabs — but by the time they read this, it will be too late.

That, alas, is the limitation of writing for a magazine that hits the shelves on Thursdays.

So I assume they found out the hard way: the electronic vaccination data system crashed at midnight on July 14, didn’t it?

At 00.01am July 15 it was engulfed by a barrage of bleary-eyed South Africans who’d set their alarms for 23.55pm on Wednesday (at their age, they couldn’t possibly stay up that late) so they would be in pole position.

At first, the self-service portal would have quivered a bit, manfully trying to keep up, before keeling over completely. Such would have been the digital force of a bunch of desperately eager citizens born between July 14 1972 and July 15 1986.

OK, maybe I’m exaggerating about the portal bombing, but you get the gist; this is how the 35-49ers roll. As a friend put it, “we are the generation who grew up crashing Computicket’s website to get tickets for Lenny Kravitz and Live”. It’s a level of tenacity that only people who grew up with the challenges of dial-up internet and communicating via school phone boxes can show. We’re more technologically astute than those older than 50 or 60, but we’re still used to having to scrap for what we want.

And what we really, really want is a shot of Pfizer in our upper arms.

As it turns out, the vaccine turnout among those older than 60, the least tech-savvy among us, was surprisingly sluggish. The 50-plus crew were better — but were also surprisingly wary.

But that’s not the way it will be for those aged between 35 and 49. We, to torture the metaphor further, are going to hit those vaccine queues like we lined up for tepid Smirnoff Spins when U2 performed. We’ll swarm vaccine sites like 14-year-old girls trying to get Backstreet Boys autographs. We’re bringing it.

The top end of our catchment did their time in raves, so have zero worries about ‘the dangerous things that might be in vaccines’

Last week, when acting health minister Mmamoloko Kubayi announced that registration would open to our age group, our WhatsApp chats lit up within seconds. As the memes that followed showed — because we recognised William Smith as our TV teacher on the Learning Channel — our time had come.

Interestingly, the National Income Dynamics Study–Coronavirus Rapid Mobile Survey shows that "age and education reduce vaccine hesitancy". Those older than 60 are the least wary, whereas those younger than 24, who are more likely to be swayed by conspiracies on social media, are the most dubious.

But our age group is technologically aware enough to know how to register, and we’ve been following the science — not the anti-vaxxer conspiracists. We know the difference between Johnson & Johnson and Sinovac, and we’ve done the reading.

The top end of our catchment did their time in underground raves at the Turbine Hall, so have zero worries about "the dangerous things that might be in vaccines"; the lower end were the first young adopters of Microsoft products, so are completely cool with Bill Gates knowing their every move.

"Anything," as a mate said, "that gets us back into the world as quickly as possible."

Because that’s where we are now — we’re parents with kids at school, people climbing the corporate ladder or entrepreneurs trying valiantly to nurture small businesses. We are gagging to get back on track, start projects, succeed and live. We’re old enough to have lost friends, and young enough to still want to plan our future. We want to get on a plane that goes beyond our borders, and go to both Wimbledon and the football in one day like the Duchess of Cambridge.

Minister Kubayi, you’re part of our gang so I’m sure you feel me. Come August, we’ll be front and centre for our jabs — so have all the nurses, doctors, interns and volunteers on call for some serious overtime. With apologies to Montell Jordan, my age group is now going to show SA that "this is how we do it".

In new blow to government’s vaccine rollout, inoculation shut throughout KwaZulu-Natal and in parts of Gauteng amid violence
National
1 year ago

Lack of communication, misinformation on social media contributing to slow vaccination rate even as fatality rate soars
National
1 year ago
Next Article

Medicines regulator not planning to suspend J&J shot after US flags risk of ...

Medicines regulator not planning to suspend J&J shot after US flags risk of ...