RAZINA MUNSHI: In the vaccine queue, who is the most ‘deserving’? 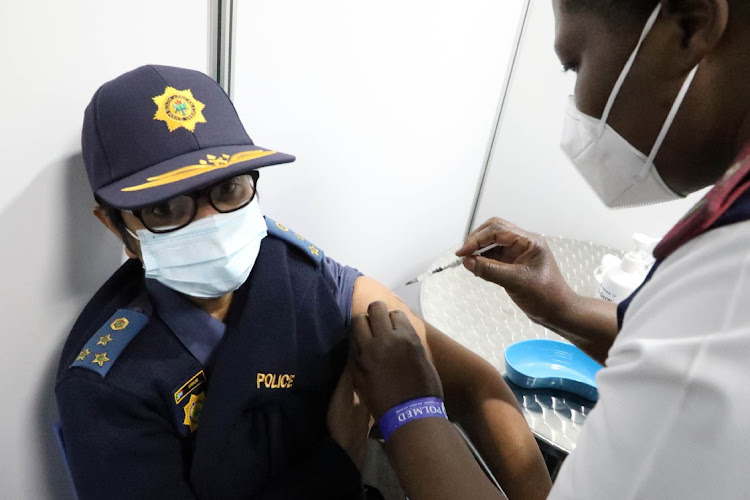 A member of the SA Police Service gets vaccinated during the launch of a vaccination roll-out programme in Orlando Stadium, Soweto. Picture: ANTONIO MUCHAVE/SOWETAN

Should supermarket cashiers be next in line to get a Covid jab?

Shoprite CEO Pieter Engelbrecht seems to think they do. Last week, as the third wave of infections continued to surge through SA, he made an appeal to the government to allow Shoprite’s 140,000 workers to receive vaccinations.

The country’s largest food retailer wants the government to prioritise the allocation of vaccines to its cashiers. It says it will source and administer the shots at its own cost, using its own logistics and pharmaceutical infrastructure.

“Our front-line workers, including cashiers, merchandisers and line management retail workers, have been at work every day since the onset of the pandemic, working tirelessly to ensure we provide food, essential groceries and medicine to the nation,” Engelbrecht says.

It raises the question: how does the government decide who is more “deserving” of Covid vaccines?

Most countries have developed a set of principles to guide the rollout of Covid vaccines, including factors such as age and the comorbidities.

SA’s National Institute of Communicable Diseases earlier this year set out a phased plan for the government’s rollout: 1.2-million health-care workers in phase one, people over the age of 60 and those “in congregate settings” in phase two, and the remaining adult population in phase three.

Last week President Cyril Ramaphosa set out four “streams” for the rollout. They appear to run parallel to each other.

The first stream includes people over 60, as well as, more recently, people between 50 and 59. The second stream, consisting of teachers, began last month. The third stream, which kicked off this week, is for the police and other security personnel.  The fourth stream, Ramaphosa said, is for economic sectors such as mining, manufacturing and the taxi industry, through workplace programmes.

Engelbrecht’s complaint is that supermarket employees appear to be excluded from these categories. It’s hard to see why: cashiers have direct contact with hundreds of shoppers — and if reports about the greater transmissibility of the Delta variant are anything to go by, they are seriously at risk.

But University of Johannesburg professor Kate Alexander suggests that companies first have to demonstrate care for their workers that extends beyond vaccines.

“I would have much more sympathy for some of these big owners of supermarkets if they took greater care of their shop workers, including their cashiers,” she said in an interview with Newzroom Afrika. There are reports, Alexander says, of firms that are not heeding guidelines on the quarantining of potentially exposed workers

That’s an important point. Checkers was one of the retailers that came under fire from its employees for allegedly failing to sanitise adequately after a positive case of Covid. In May last year, during the second wave, the staff at Checkers’s Rylands Village store forced the shop to shut due to concerns over their own safety.

There are concerns that without a set of principles to guide how a state should draft this “vaccine queue”, the door is left open for lobby groups to pressure the government in favour of their constituency. There is little doubt that the government — backed with sound advice from scientists — should be tasked with this prioritisation exercise.

But, as Alexander says, it has to be accompanied with a great deal of transparency. And so far the government has failed to communicate how it is determining its priority list.

In the early days of the pandemic, when much of the world was locked down, workers who had previously been rendered invisible were suddenly thrust into the spotlight.

Shop workers, garbage collectors, cleaners, farmers and drivers received an outpouring of appreciation from the public. And in some cities around the world residents took to their balconies with pots and pans or song to celebrate health and other front-line workers.

We came to understand their roles as “essential” — maybe even for the first time. So it won’t come as a surprise that the people most at risk of contracting the coronavirus, and dying from it, fall into this category.

Yet the government’s insistence on people using the EVDS online vaccine registration portal has not worked, in the words of vaccinologist Shabir Madhi. This, along with the state’s astounding unwillingness to vaccinate over weekends, is to the disadvantage of workers.

Now that the applause has faded away, and even as the members of the rest of society once again retreat into the safety of their homes, leadership is still absent.

This superb article in The Conversation sets out SA’s missteps in the procurement and rollout of vaccines. But the authors also spell out how SA can regain its footing:

It’s not too late to fix this. The alternative will be disastrous for all of us.

The variant, which has taken the pandemic to a new level, has already been detected in five provinces
Opinion
2 months ago