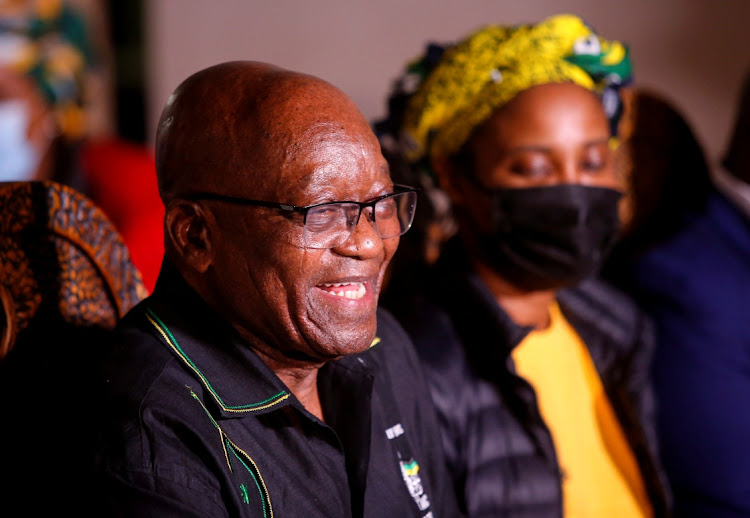 Jacob Zuma addresses the media at his home in Nkandla, on July 4, 2021. Picture: REUTERS/Rogan Ward

For those of you who might have forgotten how former president Jacob Zuma is in it entirely for himself, his particular brand of toxic narcissism was on peak display in Nkandla on Sunday night.

After addressing his “supporters” who had flocked to Nkandla to protest against the 15-month jail sentence he’d been slapped with for contempt of court, Zuma held a press conference, where he was asked why he’d said nothing about the fact that the Covid lockdown rules had so obviously been flouted.

His response told you everything you needed to know about Zuma’s psyche.

“I’m not sure whether that question is helpful to me, who is feeling very much aggrieved. Because the reaction of the people tells the story: that they’re not happy with what the court has done. And I think it is their own reaction that they make which, I think, must tell all of us that we must always do things correctly. We must not provoke people, and that question must be [posed] to other people, because I was not responsible for what had happened.”

It’s an answer that encapsulated everything that is so contemptible about SA’s worst post-democracy president: the easy lies and relative truths of a pathological narcissist, a profound inability to take responsibility for anything, a startling immunity from reason, and Olympic-level hypocrisy. Whether something is helpful to him is all that really matters to him.

But then, the whole day was emblematic of Zuma’s worst characteristics, from the moment he addressed the crowds and crowed how the police won’t get to him and how the government does not know how to govern, to the numbing, lie-ridden “press conference”.

Not that any of it helped Zuma. For those who figured the former president couldn’t get any more unlikeable, his performance on Sunday — deluded, petulant, contemptuous and bad-tempered — suggested there are hitherto unexplored lows still to be achieved.

A few months ago, author William Gumede described Zuma as someone with a narcissistic personality disorder — a set of traits defined by Austrian psychoanalyst Heinz Kohut as “including an exaggerated sense of superiority, a lack of self-awareness about the impact of their behaviour and having a disdain for others, who they devalue to validate their own grandiosity”. These people lack empathy, have a distorted sense of reality and are incapable of seeing anything from anyone else’s perspective.

Narcissists like Zuma, Gumede argues, can’t accept responsibility and don’t care if they take down entire countries with them. The events at Nkandla, sadly for Zuma, only reinforced that perspective.

Though his spin doctor, Mzwanele Manyi, invited journalists to ask questions, Zuma very evidently only wanted to answer those which allowed him to accentuate his victimhood.

Asked whether, if his appeal fails, he’d hand himself over to the police, Zuma sniggered derisively, and said he “wouldn’t speculate”; asked if he intended to attend the ANC national executive committee meeting, he countered with “Is that your business?”; and asked if he aligned himself with the view of the minority of Constitutional Court judges who believed he’d committed contempt of court, he scoffed imperiously: “Do you want me to judge myself?”

Still, the press conference illustrated precisely why he had little option other than to stalk out of the Zondo commission when he did in November: had he been sitting in the witness box at the commission, facing off against advocates who could scythe through the obfuscation and obvious deflection, he’d buckle.

On Sunday, faced with far-from-unanswerable volleys from journalists, Zuma equivocated, whined that “your question is not fair”, giggled scornfully when asked to explain his hypocrisy, and flatly ignored questions he didn’t like. At one point, Manyi moaned that journalist Nomsa Maseko wasn’t showing “respect” by asking Zuma why he hadn’t urged his supporters to adhere to Covid regulations, but it was painfully obvious that Zuma had no half-decent answer.

Anyway, it was pretty rich of Manyi to speak of “respect”, considering that this whole shebang was only happening because the former president couldn’t be bothered to show any respect to the constitution or the courts. “Respect” is something that other people must show.

But perhaps the most disingenuous moment of the entire disingenuous superspreader event was how Manyi sheepishly claimed Zuma wasn’t wearing a mask because of some confidential “medical condition” (though he probably didn’t mean narcissistic personality disorder). If this really were true, why then would Zuma not be vaccinated either?

Yet this is the same man who earlier in the day wore a mask around his neck, when he addressed his legion of supporters — as the picture emblazoned across the front of the Financial Times on Monday attests.

And, let’s not forget, this is the same man who claims prison would be “too risky” for him during the pandemic. Well, if he thinks that’s risky, he should try going for a stroll outside his house.

On Tuesday, his lawyers will argue in the high court in Pietermaritzburg that the order to jail him should be interdicted until after the Constitutional Court application for “rescission” is heard on July 12. By allowing Zuma yet another chance to explain himself, it’s hard to shake the impression that the Constitutional Court blinked: would any other normal mortal be afforded yet more latitude?

Still, it probably won’t matter: if the “press conference” on Sunday was any kind of trial run for the depth of the argument that Zuma is planning to mount next week, the poverty of the reasoning isn’t likely to change his ultimate destination: jail.

When decisions are made by mobs threatening violence, rather than the rule of law, it is not a democracy at all
Opinion
1 year ago

Former president Jacob Zuma’s disdain for the judiciary and the rule of law has finally caught up with him. Considering his intransigence, it was ...
Features
1 year ago
Next Article