The variant, which has taken the pandemic to a new level, has already been detected in five provinces 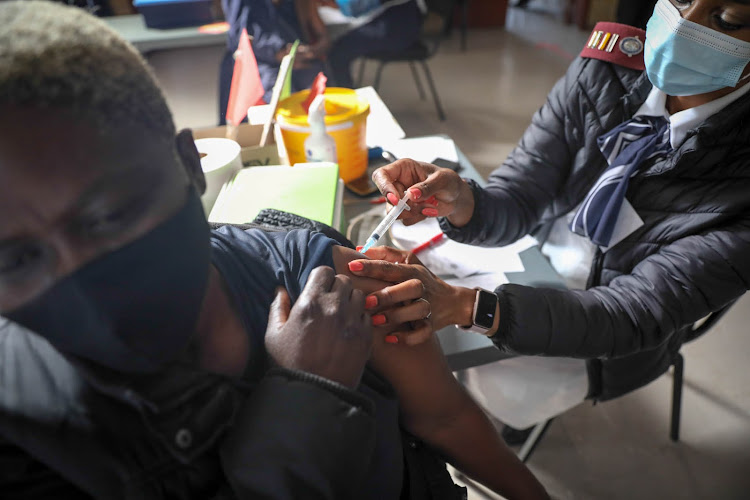 Last week, Australian researchers provided a detailed account of two cases of the transmission of the Delta variant of Covid in Sydney.

The moment of transmission was caught on CCTV, and all it took was a couple of seconds.

In the first instance, a man in his 50s contracted Covid after he passed through the airspace of an infected driver.

New South Wales health minister Brad Hazzard described it like this: “It would appear he was somewhere in the range of between 10cm, and possibly 50cm-60cm, away, in a passing situation.”

In the second instance, a woman in her 70s was sitting outside at a cafe when the same driver, who is at the centre of the latest outbreak, was inside the venue. The genomic sequencing of her virus is an exact match of that of the driver.

“Each of them had stood not far away from each other for a very short time, and then it would appear that one of them possibly moved through the airspace the other one had occupied,” Hazzard said.

We already know that doctors in India, where the Delta variant was first detected, were confounded by the apocalyptic scale of its spread. It is dangerous, partly because it is 60% more transmissible than other variants, as this article in Science magazine details. The number of Delta infections has also exploded in the UK, where it now accounts for 90% of infections in a country with one of the fastest vaccine programmes in the world.

And it looks almost certain that the US is next.  National Institute of Allergy & Infectious Diseases director Anthony Fauci has described the variant as the “greatest threat” in the US’s efforts to eliminate Covid. It is thought to make up 20% of new cases there, up from 10% last week.

A picture is beginning to emerge of its spread in SA too.

Over the weekend, authorities for the first time confirmed that Delta was behind the sudden rise in infections in this country. Already it has been detected in five of SA’s nine provinces.

Speaking at a health department webcast on Saturday, Prof Tulio de Oliveira said testing confirms community transmission of the Delta variant in provinces such as KwaZulu-Natal. The national institute for communicable diseases is expected to publish more extensive data this week, confirming a similar pattern in Gauteng, which scientists say will explain the sudden surge of infections there. 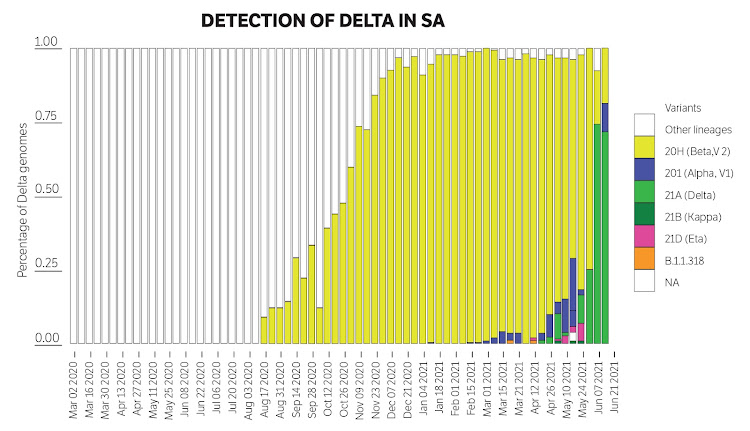 Limiting the contagion comes down to vaccines, experts believe.

Rich nations, and especially those in Europe and North America, have a better chance of limiting the damage that Delta can inflict: countries that administer more vaccines are likely to experience a slower uptick in hospital admissions than others.

This debate once again highlights wealth inequalities. Delta drives an even wider wedge between vaccinated and unvaccinated people — between, and also within, countries.

The New Yorker magazine, in this article, wades into the conundrum that many Western nations face: do they open their economies and drop nonpharmaceutical preventive measures such as mask wearing? It may be tempting, but doing so would undoubtedly hasten the spread of the Delta variant.

And the magazine again highlights what has already been said about the scandalous inequality of the vaccine debate: the US is vaccinating children as young as 12; yet health-care workers, elderly people and cancer patients in many other countries remain defenceless.

As it stands, there is no doubt that Delta takes the world into a different phase of the epidemic. All countries will be affected, and research is under way in earnest to understand how best to reduce the impact of the new strain.

But countries that have failed to roll out effective vaccine programmes are at the mercy of a virus that is blazing a trail of devastation everywhere.

Which means, unfortunately for SA — which has messed up the acquisition as well as the rollout of vaccines — that Delta has the potential to strike as hard here as it did in India.