The EFF leader’s proclivity to intimidate and bully has never led to consequences – but this time, his opportunistic shape-shifting could cost lives 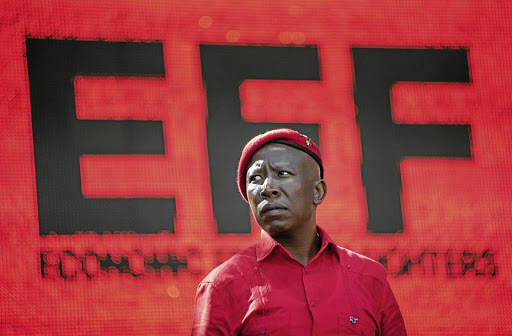 Julius Malema has never had a problem with cognitive dissonance.

On June 10, the leader of the EFF demanded that schools be shut to stem the surge in Covid cases, since the government wasn’t taking the lives of children seriously. “We give the minister seven days to close schools. Failure to do so, and we’ll have to close schools ourselves,” he said.

Well, you might have thought, maybe the country’s third-largest political party is taking a safety-first approach to the tentacle-like spread of the coronavirus, which saw the country record 13,155 new cases on Sunday.

As if any pronouncement by Malema — a man who once famously said “you must never role-model a rich person who can’t explain how they got rich” — is ever that simple.

Just six days after his schools ultimatum, Malema did an abrupt U-turn. Addressing a crowd gathered outside Uitsig High School in Centurion on June 16, Malema said that “from today, we don’t listen to what [President Cyril] Ramaphosa says about the coronavirus”.

And, rather than going the extra mile to avoid spreading the virus, Malema is now calling on his supporters to join a “march” to the offices of the SA Health Products Regulatory Authority (Sahpra) on June 25 to demand that it licences Russia’s Sputnik vaccine and China’s Sinovac vaccine.

The EFF is billing this as a “march to save lives”. Intuitively, however, you’d think that a superspreader event is the polar opposite of the sort of thing that would “save lives”.

But then, you might have missed Malema volunteering up his supporters’ wellbeing for the greater principle. “Let us go and reclaim our country from Ramaphosa. If it means death, so be it. If it is a prison, we will wait with honour, because prison for revolutionaries is honour,” he said.

Well, if being jailed for deliberately flouting rules designed to mitigate a pandemic counts as an “honour”, just imagine how much revolutionary glory awaits those EFF members who helped liberate municipal money trapped in VBS Mutual Bank.

Some of his own supporters seemed confused, justifiably. After all, just a few days before, Malema was publicly demanding that the October local government election be postponed because “the duty to preserve lives is the highest of duties”.

As one of his own supporters asked on social media, where’s the consistency?

Where indeed. As Tom Eaton wrote in TimesLive, it seems those initial high ideals “disappeared in the thunderous slapping noise of an epic flip-flop as Malema suddenly realised it’s very, very important to expose people to Covid if he’s going to stay employed”.

The question is, will there be any consequence for Malema, now that he has thrown down the gauntlet to police minister Bheki Cele by publicly vowing a defiance campaign? Don’t hold your breath: while Cele’s police have no compunction throwing their weight around (as 49 complaints about police brutality during the lockdown suggest), it’s usually only the politically disenfranchised who cop the heat.

Already, the EFF is flouting the regulation that limits outdoor gatherings to fewer than 100 people. Even as Malema spoke at Uitsig, City Press reckoned he was addressing a group that “easily numbered in the hundreds”.

But then, Malema’s proclivity to intimidate and bully has never led to consequences. Last week, he threatened that his supporters “must find the address of the home of the CEO of Sahpra … there will be a sleep-in at his house until vaccines are provided by this government”.

This, ostensibly, is the purpose of that June 25 march.

Never mind the fact that, as health journalist Claire Keeton points out, Sinovac has “not yet published study results in any medical journal”, while there are still questions around how safe the Sputnik vaccine is for men living with HIV. No, apparently the EFF knows better than the scientists.

None of this — Malema’s U-turn, or the intimidation tactics — should surprise you. As Gareth van Onselen detailed in November 2018  Malema’s political history is one in which hypocrisy is the default position, rather than the exception.

This is a man who veered from praising the “still independent” judiciary to implying it was ridden with bribery; from claiming in 2009 that the Scorpions were “serving the agenda of the imperialists” to, seven years later, saying the “corruption-fighting institution” was shut down to help Jacob Zuma steal more.

As Van Onselen put it: “Malema oversees a political lie factory. It churns them out on a grand scale, on every conceivable subject.”

This time, however, that opportunistic shape-shifting, characteristic of populist leaders, could cost lives.

Two years back, The Washington Post’s Anne Applebaum decoded the one characteristic synonymous with populist politicians.

“It isn’t racism, identity politics or even nationalism … [it] is one simple character trait: hypocrisy,” she wrote. “These politicians aren’t tribunes of the people, they are hucksters. They aren’t bitter enemies of the Western system; they are con artists who seek to profit from it.”

Examples are everywhere, the newspaper pointed out. In France, for example, the far-right leader Marine Le Pen campaigned vigorously on an anti-European platform, yet her party is bankrolled partly by the European Parliament; in Venezuela, Hugo Chávez’s crusade on behalf of the poor was pretty soon unmasked as a kleptocratic money grab.

And yet this sort of tactic has been enormously successful in an essentially ahistorical world, where politicians, untethered from their own conscience, get away with saying whatever they have to at any point in time.

For evidence of this, look no further than the truly fabulous profile of UK Prime Minister Boris Johnson, published recently in The Atlantic magazine.

Johnson, who famously wrote two drafts of a Brexit column — one in favour of “Leave”, the other for “Remain”— before announcing which side he supported in the 2016 referendum, is depicted as someone who “has spent a lifetime turning ambition, opportunism, and ruthless self-promotion into extraordinary personal success”.

Sound familiar? And, rather like Malema, Johnson’s opponents also cannot fathom how it is that there is an almost ceaseless volley of scandals (in Malema’s case, even criminal charges), yet nothing ever seems to stick.

“Time and again, when controversy has engulfed [Johnson], he has emerged unscathed,” says The Atlantic. “Part of his electoral genius lies in his ability to stop his opponents from thinking straight: in their hatred for him, they cannot see why he is popular, nor what to do about it.”

Of course, simply comprehending that someone is a shameless liar doesn’t alleviate the problem. Nor does it explain why, as The Washington Post puts it, these populists instinctively try to undermine the press and stifle judicial independence as soon as they’re in power.

But it does help to remember that, as The Washington Post says, “their private agendas are very different from the ones they declare in public, and they don’t want any of us to find out”.

Don’t, in other words, buy the ruse that Malema’s march is about “saving lives”. Rather, as always, it is more about personal ambition.

The EFF’s ‘pay back the money’ refrain has come back to haunt it, with red faces all around
News & Fox
11 months ago

GARETH VAN ONSELEN: The state of the EFF

Absurd as it is, the campaign against Adam Habib is the manifestation of a dangerous trend threatening us all
Opinion
1 year ago
Next Article

JONNY STEINBERG: The post-ANC era has begun, and it ...

SA hurtles towards huge fuel price hike with no ...

Treasury closer to cleaning up procurement with two ...