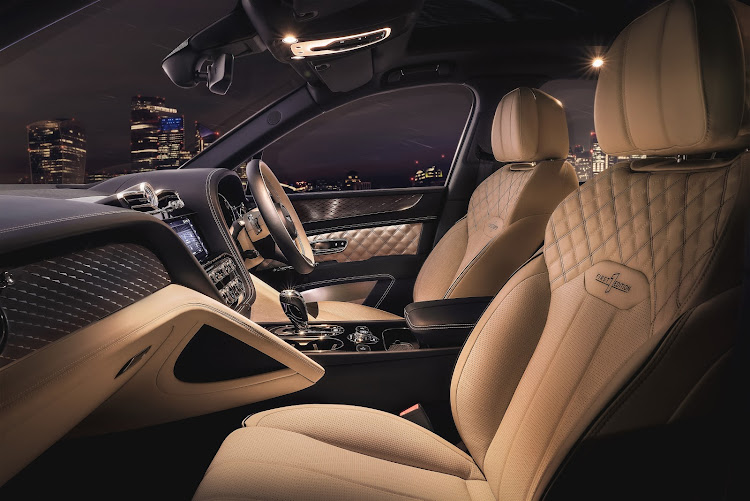 The lap of luxury becomes even more luxurious. Picture: SUPPLIED

Try not to be too jealous, but there are people out there for whom the word “recession” does not exist. They are the people who, while everyone else is scratching around for money to pay bills during our Covid-ravaged existence, are happy to splash out a few million rands on a lump of metal decorated with four bits of rubber at the corners and a few hundred horsepower under the bonnet.

Figures supplied by the Automotive Business Council show that in the first five months of this year, Ferrari sold 34 new cars in SA, Bentley 27, Lamborghini 24 and Maserati 15.

And then there was Porsche, which managed 506. However, the German marque is a special case in the luxury sphere. While the other brands have prices whose mention might require some of us to wear adult nappies, Porsches start at “only” R1.5m. According to Audi SA retail head Asif Hoosen, that’s the base point at which cash customers aren’t bothered by the economic woes that trouble everyone else.

With some new “hypercars” costing up to $10m (around R135m) and a classic 1963 Ferrari reportedly fetching $70m (about R950m) at auction last year, some people appear to exist in a parallel universe where price and cost of ownership are irrelevant.

For the rest of us hoi polloi, it’s never been more critical. Nowhere is this more clearly reflected than in the motor industry’s monthly sales figures. A couple of years ago, who would have imagined that German premium brands Mercedes-Benz and BMW would be outsold in SA by a Chinese car?

But that is what’s happening. Haval, part of the Great Wall Motors Group, sold 6,340 cars in the first five months of this year, compared to Mercedes’ 6,088 and BMW’s 5,416. At least, we think that’s what the German companies sold. They stopped reporting monthly sales some time ago, citing instructions from their parent companies. Consequently, numbers attributed to them are an industry estimate.

There is no denying that their sales have been declining for some time, as SA’s economic difficulties of the past few years have pushed traditional customers of all premium brands into cheaper alternatives.

The 2021 sales chart shows several former outsiders have become major players in the local market by offering value for money and peace of mind through competitive pricing and long-term warranties and service plans.

Every one of the above, however, exists in the shadow of Toyota and Volkswagen (VW). Toyota sold 46,830 vehicles up to May, well ahead of VW’s 30,406. However, the Japanese company’s strength is across the entire product spectrum of cars and commercial vehicles. Its Hilux bakkie is SA’s best-selling vehicle of any description. In the car market, however, VW reigns supreme, courtesy mainly of its Polo and Vivo cars. By the end of May, it had sold 28,494 cars, to Toyota’s 21,406.

So far this year, the aggregate market is 189,389 – 44.9% ahead of the 130,703 at the same stage in 2020. However, such percentages are meaningless because they compare the current market to a period of hard lockdown. Forecasts of full-year recovery range from 10% to more than 20%.

While some analysts say low interest rates are likely to attract some buyers, this could be cancelled out by higher prices. A report in May by the TransUnion research house showed that new-vehicle prices rose during the first quarter of 2021 at nearly three times the general inflation rate.

Legislation is catching up with vaping as tobacco bill ...