A newly launched memorial tells the haunting, harrowing tales of the state’s failure to care for its most vulnerable citizens Family members gather outside the Gauteng health department in Johannesburg at a vigil for the 37 patients who died. Picture: SOWETAN

In September 2016, Phumzile Motshegwa found herself on the blood-stained floor of PutU2Rest Mortuary, a disused butchery-turned-funeral parlour in Atteridgeville. She was there to retrieve the body of her brother Solly. Putting on a pair of rubber gloves, she began sorting through corpses.

Thirty-six bodies later, she found him.

Motshegwa recognised Solly by the scar on his head – the result of a machete attack during the political violence of the late 1980s, she later told The Guardian. It was this that had left him in the hands of mental health-care provider Life Esidimeni, paid by the Gauteng department of health to care for its wards.

Only, that contract had been terminated by the department in an attempt to “de-institutionalise” patients and cut costs.

Without Motshegwa’s knowledge, Solly had been transferred to the Precious Angels home. The first she knew of his move was when she received the call to collect his body. He’d been dead a month.

Motshegwa and Solly’s story is one of many that appears on the Life Esidimeni online memorial and advocacy project website, launched yesterday to coincide with the first international mental health action day.

A project of the SA Depression & Anxiety Group and public health advocacy outfit Section 27, with the support of the Heinrich Boll Stiftung, the website is a tribute to the 144 victims of the tragedy who “died in the care of the public health system from neglect and starvation ... at the hands of those who were supposed to protect them”. 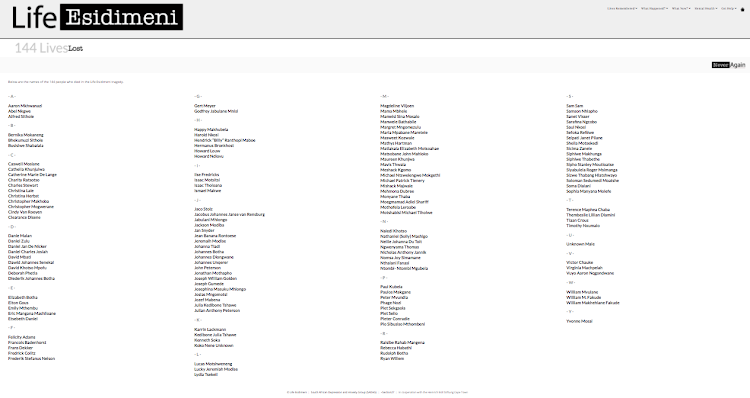 It includes a gallery – 21 pictures at present, but one hopes more will be added in time – of bereaved family members with portraits of their loved ones, along with a short description of their loss.

Here is Motshegwa, along with a picture of someone holding a cellphone displaying a photo of her late brother Solly.

Here is Heidi Jogiat holding a dated, framed photograph of her late mother Phoebe Soudom and a young girl, presumably Jogiat herself. When Jogiat found her mother’s body at Baneng home, “she had cuts and sores on her body, and marks around her neck. No-one could tell her what had happened.”

More than five years on, Soudom’s cause of death remains “under investigation”.

Here is Maria Colitz and her late husband Fredrick, snappily dressed in a suit and tie for their son’s wedding. Fredrick was moved to the Mosego home without his family being notified. When Colitz first saw him there, “he had bruises on his head, nose, arms and feet”. Her son called the facility the next day, only to be told: “Don’t you know that he’s dead?”

The site is testament to cruelty and indifference, interspersed with the myriad other injustices and indignities that define life for so many South Africans.

Daniel and Lydia Maretele hold a photograph of his late sister Maria. It took them a year to locate her, in which time they both lost their jobs – he as a carpenter; she as a domestic worker. Their employers wouldn’t give them time off to search for Maria.

In November 2017, Daniel got word that Maria had died in January that year, but no-one would tell him where she’d been buried. It took a court order to locate her remains in the garden of the Takalani home. She has now been reinterred near their family home in Brits.

When Jabulile Hlatshwayo found her stepson Sizwe – he’d been transferred nearly 100km from where she lives, without her knowledge – she discovered that he’d been sent to the Anchor NGO without his epilepsy meds or ID. Given the state he was in, she promised to return and collect him, since she didn’t have sufficient money to pay both their taxi fares that day. He died before she could do so.

The tragedy of Life Esidimeni has been well told in SA. But a memorial of this sort is vital, lest we forget the plight of the 144, or give up on the quest for justice.

Read these stories – look at these pictures – and weep. Then read them again and get angry – for the senseless snuffing out of their lives; for the cruelty they endured in their final days; for the continued denial of justice.

As part of an arbitration between the victims’ relatives and the authorities, former deputy chief justice Dikgang Moseneke awarded compensation to the families in 2018. In addition, and as Section 27 executive director Umunyana Rugege points out in this op-ed for the Daily Maverick, responsible officials were required to account for their actions under oath – something that may have given families a modicum of closure.

But former Gauteng health MEC Qedani Mahlangu has yet to take responsibility for the decision to relocate the patients. She resigned the day before the health ombudsman’s report into the tragedy was made public.

Mahlangu also famously stood for re-election to the ANC Gauteng provincial executive committee in July 2018 – and was, mind-bogglingly, picked as a provincial leader (Stephen Grootes is scathing about it in this 2018 Daily Maverick article).

The party subsequently forced her to step down.

Former provincial health department head Dr Barney Selebano was suspended, but resigned his position before disciplinary action could be taken. Rugege notes that he still faces sanction by the Health Professions Council of SA – though a News24 report by Nelisiwe Msomi last month said the matter, first brought before the council in September 2019, had again been postponed.

As Msomi reports: “The trio still have to face disciplinary action as they have not yet appeared before the professional conduct committee of the [council].”

Then, after a National Prosecuting Authority investigation found insufficient evidence to prosecute the matter – either to show causality in death, or to specifically link officials’ actions to the deaths – it announced its intention to launch a joint inquest into the 144 deaths.

Last month, it announced that the inquest will proceed under justice Mmonoa Teffo on July 19.

It’s been a long, arduous walk to reach this point (as the Esidimeni memorial project documents on two separate timelines), but the inquest is, at last, an opportunity for justice and closure.

Until that process has concluded, the newly launched Life Esidimeni website stands as the only thing approximating memorialisation of one the most disturbing displays of willful neglect and cavalier cruelty in post-apartheid SA.

Of course, there was supposed to be another memorial to the victims of the tragedy. Moseneke ordered in 2018 that a monument be erected in tribute.

It was subsequently agreed that this would take the form of a “living monument, a hospital similar to the Nelson Mandela Children’s Hospital, where the best mental health professionals will work from, and attend to specific cases, and in all five regions, a clinic ... with the goal of addressing early detection of mental health in the communities”, family representative Christine Nxumalo told News24’s Msomi last month.

As the Justice Unfinished timeline on the memorial website notes: “There has been no progress at all on this.”

If there’s anything that captures the gut-punch devastation of Life Esidimeni – and the callous disregard that allowed it to happen – it’s the list of 144 names on the memorial site, and one in particular. It’s the only entry under the letter U: unknown male.

What Sexwale never offered, not even once during his extended diatribe, was proof
Opinion
5 months ago

The ANC apparently has a ‘cadre policy’ and a ‘deployment policy’, and they’re not the same thing. If you’re understandably confused by that, it ...
Opinion
6 months ago

Now is not the time to drop our vigilance. There’s just too much at stake
Opinion
6 months ago
Next Article

NPA to set up inquest into the Life Esidimeni tragedy

NPA to set up inquest into the Life Esidimeni tragedy