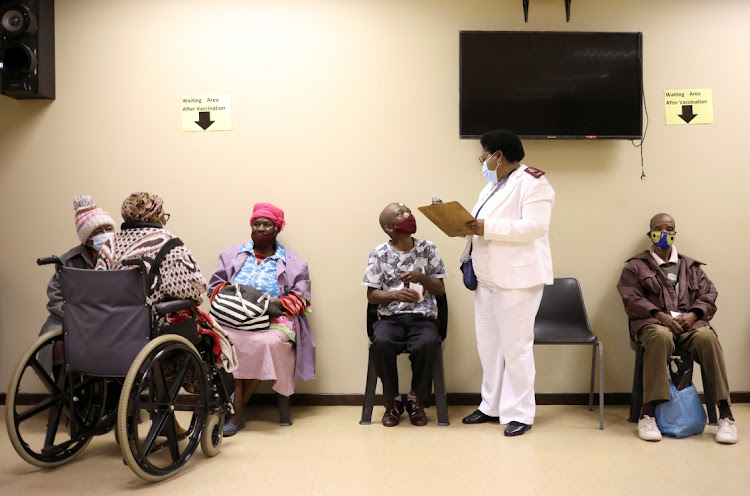 A nurse talks to a man following his vaccination, as South Africa rolls out the Covid-19 vaccines to the elderly at the Munsieville Care for the Aged Centre outside Johannesburg. Picture: REUTERS/Siphiwe Sibeko

For the past week or two, I have encountered a blizzard of rumours about wealthy South Africans apparently gaming the system to swindle early access to Covid vaccines for themselves.

One such story is that a group of well-to-do Capetonians got their doctor to falsely claim they’re care workers so they could qualify for the vaccines set aside for health-care workers under the Sisonke programme. (And this was before vaccines opened to those aged over 60 this week.)

Another tale is of a Joburg dentist who, I am told, registered his entire extended family as his “practice staff” so that they could get the jabs early too.

Now, you know what the grapevine is like. Both these stories are exactly the sort of thing tossed about at a gossipy breakfast at Glenda’s or over a boozy Sunday lunch. Rather like those apocryphal stories you hear of someone-who-knows-someone-whose-cousin-was-denied-a-place-at-UCT’s-medical-school, which instead went to someone who’d scraped through matric. Yeah, right.

Over the past year, I’ve heard similar anecdotes about wealthy executives buying foreign vaccines on the local black market, as well as tales of people who’ve flown vaccines into SA on private jets.

And yet it turns out some people really are jumping the queue.

Last week Cape Talk and 702 reported how furious health-care workers were turned away from sites which ran out of vaccines as doctors’ families and people in administrative jobs ended up getting the jabs.

Dr Keith Cloete, head of health in the Western Cape, told TimesLIVE that there had been “worrying and unfortunate” incidents of those who wouldn’t qualify skipping the queue. The province’s premier, Alan Winde, said it was “absolutely not acceptable to cheat the system and push your way in front of either vulnerable people or those in the health sector”.

Given how many people I know do actually circumnavigate everything from traffic fines to forex rules, I imagine these incidents are probably not as sparse as we’d like to think.

If you fall into the category of people abusing the vaccine rollout or if you now someone who is doing so, please take note of this message and pass it on.

The message is this: skipping the queue for a vaccine even though you’re probably no more vulnerable than millions of others who can’t get it, is not OK.

If you’re the kind of person who has used your power, money or connections to pilfer a dose illegally, there’s a high chance you’re also the kind of person who is surrounded by sycophants. They won’t tell you this — they’ll bow and scrape to your craven rationalisation — but you represent our country’s greatest flaws.

You’ll justify it by saying you’re just trying to protect your loved ones, that your parents are old or that you have family members with comorbidities.

Bafflingly, some of those who aren’t health-care workers have even taken to social media to boast about how they got a vaccine. And their arguments are as self-serving as you’d expect: “I’m a breadwinner” with an “extended family that depends on me” is one such line.

But the truth, as they well know, is that there are millions of South Africans in the same position — frustrated and angry about the glacial vaccine rollout and worried about their loved ones — but they’re not breaking the law.

Sure, you may believe you’ve been failed by the state’s botched handling of the rollout, so you’re just taking matters into your own hands. And yes, it is annoying that your family in London are done with their jabs — and even more bizarre that all your friends in Zimbabwe have had theirs too.

You may also feel that your need to run a successful business, to travel, to socialise with important people or even, perversely, to help others in a philanthropic way, means that getting a vaccine in the equivalent of a back alley is all A-OK.

You and your smarmy mates might even smugly congratulate each other for your hustling skills and ability to “work the system”. And sadly, you’ll probably even be right when you argue that no-one will catch you and you’ll get away with it.

You must think you’re pretty smart. Rather than, you know, a Machiavellian loser with an elevated sense of entitlement and a sociopathic view of community.

On all these defences you’d raise, you’d be wrong. The reality is that you would be perpetrating the same sort of fraud on the public that you’ll so often rail against when it’s committed by politicians.

As for those facilitating this schlenter — the doctors, lawyers or government types faking vaccine forms — you’re the personification of all that’s wrong with the country. You’re the pothole threatening to derail SA’s recovery.

If our country is facing an ethical trough, as some argued last year when our Covid emergency funding was stolen, it’s precisely because people like you can’t see the problem with what you’re doing. Or worse, don’t care.

The government has a chance to be proactive and get ahead of the virus. But for now, until they act, we’re trapped in limbo
Opinion
6 months ago

It is, of course, somewhat ironic that it is scent which is providing a refuge from the ravages of the pandemic, when it is this sense that is often ...
Opinion
7 months ago

As we live through this heinous fever dream, just know that it’s entirely rational to be feeling flat or worried right now
Opinion
8 months ago
Next Article