The president’s mere appearance speaks volumes , and it is immensely significant to put a clean break between his leadership and that of his predecessor Jacob Zuma, but it is not enough just to show up 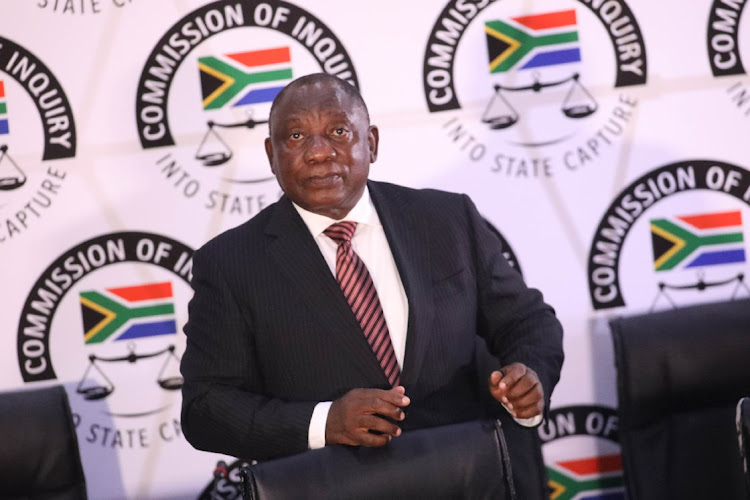 President Cyril Ramaphosa appears at the state capture commission to testify in his capacity as the president of the ANC. Picture: Veli Nhlapo

How exactly can we characterise President Cyril Ramaphosa’s inaugural appearance before the commission of inquiry into state capture, chaired by deputy chief justice Raymond Zondo? As revolutionary reformer or a middle-of-the-road mumbler? An early assessment tends towards the latter.

There was a hesitance, a vacillation, in Ramaphosa’s responses before the commission. It could be attributed to nerves or to a conscious, strategic approach to shield the ANC from its undeniable complicity in state capture;  or it could be due to the poor way in which questions were phrased by evidence leader Paul Pretorius.

While the president’s mere appearance speaks volumes — and it is immensely significant to put a clean break between his leadership and that of his predecessor Jacob Zuma — it is not enough to merely show up, as he did on Wednesday.

Ramaphosa delivered a lengthy opening statement, which struck all the right notes. “I appear before the commission not to make excuses or to defend the indefensible,” he began. “The position of the ANC on leaders and members who have been complicit in acts of corruption or other crimes is clear. Their actions are a direct violation, not only of the laws of the republic, but also of the ANC constitution, its values and principles, and the resolutions and decisions of the ANC’s constitutional structures. Such members must face the full legal consequences of their actions.”

These members “cannot rely on the ANC for support or protection, nor may they appeal to the principle of collective responsibility”.

Ramaphosa further conceded: “State capture took place under our watch as the governing party ... We all acknowledge that the organisation could and should have done more to prevent the abuse of power and the misappropriation of resources that defined the era of state capture.”

But this is nothing new. Since launching his presidential bid in early 2017, on an anti-corruption ticket, Ramaphosa has been singularly honest about the extent of the problem of corruption and state capture in the party.

Platitudes and rhetoric aside, it was during the question-and-answer session that Ramaphosa shut off to an extent, resulting in Zondo attempting to draw him back out.

President Cyril Ramaphosa appeared before the state capture commission on April 28 2021 as the head of the ANC.

While Ramaphosa defended the ANC’s deployment policies, he at the same time acknowledged weaknesses in deploying its members to the public service.

He said he had raised the fact that the deployment committee had been bypassed with Zuma, during his tenure as chair, but the former president simply offered a mea culpa.

In particular, Ramaphosa did not go into detail over which appointments he had confronted Zuma about.

Maybe this was because Pretorius had posed a question about appointments in at least five state-owned companies as well as in law enforcement agencies, making specifics rather difficult.

But Zondo did not let go of the appointment issue — rightly so, as it cuts to the heart of state capture. “When one looks at what happened in various SOEs – Eskom, Transnet, SAA, Prasa, Denel – over a certain period, how is it possible that all these boards [did] not [go through] A,B,C,D [in terms of oversight and governance]? It raises questions about how they were appointed,” Zondo asked. “How could SOEs be where they are now when they had boards? Who was making appointments here? What was going on?”

Ramaphosa began by explaining that this was the reason for the commission’s existence, but in the end, he conceded: “There was a massive system failure ... certain people were put in positions to advance certain agendas. But some of it was so hidden, so masked.”

He also detailed what is now being done to avoid a repeat of the dodgy appointments made during the Zuma era.

Still, Zondo was not satisfied: “I think I want to know with regard to SOEs, what did the executive do? Because the situation was deteriorating.

Again, Ramaphosa wasn’t specific in his response — saying the government had worked in “silos” in the past (whatever that means) but that his administration was working to change this.

Pretorius then — finally — cut to the chase, and asked whether the improper appointments had in fact gone through the deployment committee. If so, he said, the ANC needs to account for them.

Again without specifics, Ramaphosa acknowledged that things went “horribly wrong” but added he was at the commission to “correct that” and to “do so with humility”.

There was a sense of mounting frustration, as Zondo wanted Ramaphosa to detail specific instances where things went wrong. Instead, the president asked if he could do that as he closed his evidence.

“Let me end my evidence with that ... what we have done wrong,” he said.

Interestingly, while Ramaphosa was in the witness box, his reform agenda was more starkly on display outside the commission. There, former ANC North West leader Supra Mahumapelo was found “guilty of sowing divisions in the ANC” by the party, and his membership was suspended for five years.

This means that Mahumapelo,  who remains a key ally of Zuma and is aligned to secretary-general Ace Magashule,  could lose his seat in parliament. He still may appeal against the decision — and the appeal process is headed by another Zuma ally, Nomvula Mokonyane.

Magashule, too, is on the ropes, as the 30-day period for him to step down to face his corruption charges concludes on Friday.

And, in yet another key development, the Special Investigating Unit announced that it is set to probe a firm allegedly linked to ANC spokesperson Pule Mabe, who is also a Magashule ally.

Ramaphosa is due to continue giving evidence today. Let’s hope he puts the diplomacy aside in favour of the truth. It is the only way he can truly cleanse his party of its role in the state capture saga —  and himself.

*Marrian is deputy editor of the FM

Cyril Ramaphosa, in his capacity as ANC president, is giving evidence to the state-capture commission
National
2 weeks ago

The president has, though, conceded there are ‘instances’ where it has gone wrong
National
2 weeks ago
Next Article