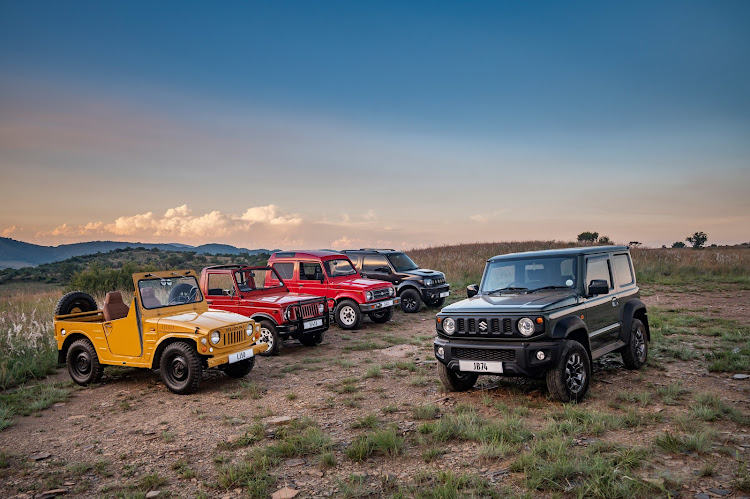 Five generations: the Suzuki Jimny and its predecessors. Picture: SUPPLIED

A flurry of new products has helped Suzuki increase both sales volumes and market share at a time when the overall SA new-vehicle market has been in freefall.  In 2020, while the Covid-ravaged market shrank 29.1%, Suzuki sales grew nearly 7%, to 16,527.

In February this year they hit a monthly record of 2,142. It’s only the second time they have breached 2,000; the previous occasion was in October.  Suzuki’s share of the February car market, at 8.6%, was also a record.

So can Suzuki continue breaking records? It will be difficult, admits Carpenter. The rush of new vehicles that has propelled sales over the past year is at an end. In 2020, the company introduced the Dzire, Ignis, Baleno and S-Presso to SA. But the just-launched Brezza compact sports utility vehicle is likely to be the last all-new vehicle to reach these shores in 2021.

There will be modest updates of existing models like the Swift, but “our new-model proliferation is coming to an end,” says Carpenter. The focus will switch to further improving customer service and possibly expanding the dealer network.

Suzuki Auto now has 60 dealerships in SA and 12 in Botswana, Namibia, Eswatini, Mozambique and Zimbabwe. Last year it opened several new sales outlets in SA rural areas, and Carpenter says that now the only part of the country where it is clearly underrepresented is the Northern Cape.

The challenge, as with all vehicle brands, is to grow the dealer network at a sustainable pace. You don’t want to undermine existing dealerships by giving away large chunks of their territory, and neither do you want to sell so many vehicles that dealers can’t cope with the after-sales service, spare part provision and maintenance that follow.

In the past, several importers have destroyed brands’ reputations through their failure to offer prompt, efficient service. Suzuki Auto has built its reputation largely on customer satisfaction, and Carpenter says it’s not about to throw it away. He says: “We have a nice balance between sales and dealer numbers.”

It remains to be seen how reputations will be affected by new Competition Commission rules governing after-sales service. Until now motor companies have enjoyed rigid control over who services warrantied vehicles and what spare parts may be used.

From July 1 this year, any independent operator meeting quality standards will have the right to service and repair – though most car owners are expected to stick with franchised dealers. Motor companies have made clear they are unhappy with the idea but, faced with an immovable commission and the fear they will be seen as blocking industry transformation, they have grudgingly accepted the rules.

Carpenter says: “Is this a hindrance or a way to better serve our customers?  It’s too early to say. We are researching [car owners’] initial reaction but, ultimately we will see the effect only after the rules are implemented.”

Since opening in 2008, Suzuki Auto SA’s strategy has been founded on affordability. In the dim and distant past, when other importers managed Suzuki, it was best known for its big and imposing Grand Vitara 4x4 SUV. Today, says Carpenter, the brand is all about compactness and value for money. “The premium segment is not our cup of tea in SA,” he says.

The pursuit of value extends to advertising. Suzuki is not one for big, bold (and expensive) TV and print advertising campaigns. “Online and social media are our marketing preferences,” says Carpenter. “You can reach a lot of people for not a lot of money and then measure the impact of your campaign. It’s the best bang for your buck.”

The sales growth of 2020 elevated SA to the top 10 countries for Suzuki exports. India, where the brand is a market leader, recorded nearly 1.25-million sales. Next, with 63,496, was Pakistan. It was followed by Indonesia, Italy, Mexico, Thailand, France, Germany, Chile and SA. ​

The dream is clear: develop a pan-African motor industry to service a new-vehicle market that will grow by 400% over the next 15 years
Opinion
2 months ago

On the other hand, used-vehicle sales are flying – but even here, stock availability is an issue, thanks to Covid lockdowns
Opinion
2 months ago

TFG hit by UK lockdowns but saved by Jet