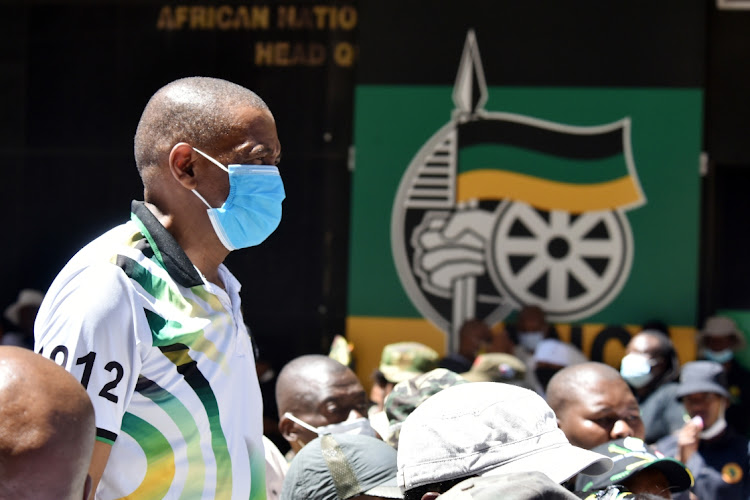 The ANC is evidently so uncomfortable being in charge that it’s now pretending it isn’t.

The governing party’s agency dilemma was on full display when its secretary-general, Ace Magashule, marched with student leaders to the Constitutional Court last week to protest at how his own party had bungled the student fee issue.

This was so much more than just impressively audacious; it illustrates either a world-class lack of self-awareness, or some awe-inspiring chutzpah.

One of the most priceless moments came when Magashule addressed the media, after receiving a memorandum of demands from the students. “We should never wait to hear it, when they cry and when they fight, until somebody dies,” he said.

Rousing words. If only his party had been in charge of the education system and the National Treasury for, say, the past 27 years. Maybe then someone would have listened, and something would have changed.

Still, Magashule was at least willing to put his considerable wallet where his mouth is, adding: “I will be contributing myself — whatever little money I have.”

Which, on balance, is probably good for the students.

If, as prosecutors say, he was able to a swing a R255m asbestos contract for his mates in the Free State, it’s probably nice to know he’s on your side. And, if he got kickbacks of up to R10m as alleged, that “little money” could translate to quite a few bachelor’s degrees.

Soothing platitudes aside, it’s like the manager of a power plant announcing job cuts, then picking up a placard to join the workers outside the gates to protest. Only, in this case, the CEO has also been accused of stripping the company to line his own pockets.

S’thembiso Msomi, the editor of the Sunday Times, writes that the ANC should spend more time in parliament interrogating the budget for solutions “instead of taking to the streets with students as if it were some powerless NGO”.

The ANC as the so-called “‘leader of society’ “appears to be more comfortable leading marches, sometimes even against itself, than doing what millions of South Africans elected it to do: govern”.

You can, of course, see a messy logic in this: if something is so broken and you don’t know how to fix it, make out like someone else did it. Like, for example, if the country has run out of cash, but you’ve also promised free university education …

Redi Tlhabi, in a column on News24 which eloquently sets out the context for the students’ fee protests, points out that 27 years is a long time to be in government and fail to provide the things you claim to care about. The narrative, she says, “tells you who this government values, and who it regards as expendable”.

It only makes it worse that, as Justice Malala writes, there’s so little money to finance education precisely because politicians supported by Magashule robbed the country blind.

Malala points out how poorly this reflects on “student leaders”, who seem simultaneously unaware of Magashule’s own corruption case and the fact that the Constitutional Court has exactly zilch to do with the fee problem.

“The person who should be doing something about their plight is Magashule. He is one of the most powerful people in SA. He does nothing for these students except use them to score political points. For this, the students sing and dance with him,” he writes.

For Malala, it makes a profound point: not only is the current crop of leaders morally destitute, we need to worry about future generations too.

Msomi argues that it would be “a huge mistake to single out Magashule for this kind of opportunism, and leave out the rest of the party”.

And it’s certainly true that there’s been a lot of scapegoating going around recently.

This weekend, Lindiwe Sisulu, minister of human settlements, water & sanitation, lamented that the Zondo commission is an “expensive way of dealing with corruption” — especially since “there is absolutely no guarantee of consequence”.

This seems embarrassingly helpless, considering that any “consequence” is within the ambit of the law enforcement authorities, under the stewardship of her political party. But this is a party which in 2008 voted to disband the Scorpions, which boasted a conviction rate of between 82% and 94%.

Self-righteously, Sisulu says: “The only way is good governance.”

Well, yes. But had the government practised that, we wouldn’t really have needed the Zondo commission in the first place, would we?

You’d think Sisulu would know this. Since 2001, she has headed seven ministries, including intelligence, housing and international relations. There are few politicians who you could honestly say has seen the deterioration from the inside at closer quarters.

The ANC’s agency dilemma was also evident last week when police minister Bheki Cele argued that the death of 35-year-old Mthokozisi Ntumba — shot by police near Wits University as he was leaving a clinic —  happened because someone “just went crazy”.

The ever-incisive political analyst Eusebius McKaiser writes on Facebook that Cele’s language is an attempt to evade moral, legal and political accountability.

“It is no bloody different to trying to imply that assaulting and killing Collins Khosa inside his own yard during the lockdown is not a callous and unlawful killing, but the result of a ‘crazy’ action,” he says.

Don’t be fooled by Cele or Magashule, says McKaiser. The reality is, this government is perfectly capable of killing citizens in broad daylight and then marching against itself to the Constitutional Court in a “pretence that it is not responsible for the malaise”.

If you’re inclined to read this as an indication that politicians aren’t always entirely honest, you’ll probably want to read Mondli Makhanya’s hard-hitting column in the City Press on Sunday.

There, he shreds President Cyril Ramaphosa’s hagiography of King Goodwill Zwelithini, the eighth Zulu monarch and descendant of King Cetshwayo, who died last week at the age of 72.

Ramaphosa described Zwelithini as a “visionary”, while the Thabo Mbeki Foundation praised his “commitment to nation-building”.

“All lies,” writes Makhanya. Rather, he describes Zwelithini as “a useful idiot in the hands of the apartheid government”, detailing his role in the four years of violence, and hundreds of deaths, leading up to democracy in 1994.

Chris Barron, SA’s finest obituary writer, also wrote an unvarnished account of Zwelithini’s life in the Sunday Times. It includes the king’s description of foreigners as “parasitic fleas” in 2015, which some saw as the spark for the wave of xenophobic attacks that followed, as well as his indefensible reference to gay people as “rotten”.

Barron also describes how Zwelithini used the Ingonyama Trust, which owns 29% of the land in KwaZulu-Natal, as a “giant piggy bank, extracting huge and escalating rents from more than 5-million mostly rural farming people”.

These two bracing articles stood in stark contrast to the far more polite histories you’d have read in recent days.

So, it was no surprise then that on Sunday night, the Zulu royal family described both those articles as “vulgar lies” — even if the family didn’t say what was inaccurate.

It shows how alert South Africans need to be for those seeking to revise history dishonestly. As the Magashule example reveals, we also need to guard against those revising the present.

Jacob Zuma and Ace Magashule are birds of a feather: both are hoping that playing politics will pull them out of the legal holes they’re in
Features
7 months ago

What is critical for Ramaphosa, if he indeed wants a second term, is that he delivers more speedily on the vaccine rollout
Opinion
7 months ago
Next Article