In an open letter to South Africans he says he has hope for the country, and that to be successful in retail, a company must care about the community 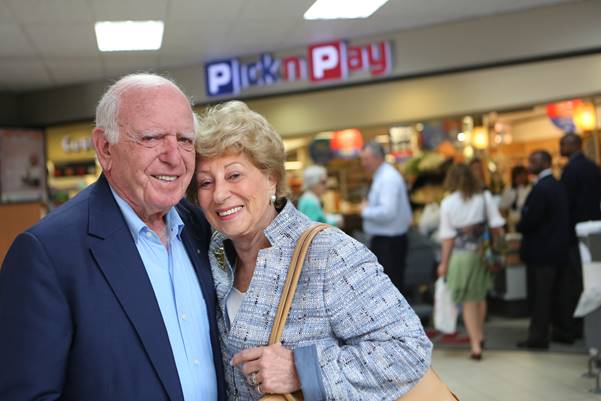 When the Greatermans Group fired 36-year-old Raymond Ackerman as MD of Checkers in 1966 with just two weeks of severance pay, he considered emigrating.

The local economy was booming, and grew at an average of 6.9% a year during that decade, but the apartheid state was consolidating its power and the future looked bleak.

“All our friends were emigrating, and we considered moving. I thought I would join a big firm and we could build from there,” he once told me.

But the Ackermans, with three small children and another on the way, chose to stay. Raymond Ackerman used a device taught to him by a 1960’s American legend of supermarketing who’d guided and advised him as he built Checkers. This was to write down the problem, then to write up possible solutions and mark them out of ten.

He did the exercise three times and each time “Start my own business” scored highest.

Not long after the news of his firing broke, he got a call from a man called Jack Goldin, who would start Clicks in 1968, offering to sell him his start-up. Ackerman remembered Jack, who was then the owner of four Cape Town stores called Pick ’n Pay. Ackerman had shown him around his 82-store Checkers empire six months previously. “It was a very important lesson. Here I had been, a big guy with 82 stores, but I made the decision to clear my diary and to go to the airport and meet him personally and show him around,” Ackerman said.

Most people would have handed Goldin over to the corporate affairs department to give him a superficial guided tour — not Ackerman.

“That decision changed our lives. It’s such an important lesson: don’t ever get too big for your boots.”

Goldin wanted to exit supermarkets and figured the freshly unemployed Ackerman was his passport out.

He had no capital, so Ackerman found 40 shareholders and entered negotiations with Goldin, which dragged late into the night. He took along his brother-in-law as adviser, having agreed they would not go beyond R580,000 (about R43m today). But   the night dragged on, and Ackerman eventually went to R600,000. At the point where it looked like the talks might fail, he tabled R620,000.

“My brother-in-law kicked me so hard under the table that it still hurts on cold days,” said Ackerman. But the deal was done and the Ackerman family relocated to Cape Town to build an empire.

“Being fired forced me to get out of the frustrations of having to deal with Greatermans and gave me free rein to build what I wanted to build. There wasn’t a lot of original thinking, but I am a good learner, I learned from American supermarkets and Carrefour in France. I’m always learning,” he said.

It was not without its mistakes. As in the case of many other SA companies, the pressure to diversify offshore was intense and Ackerman  made two failed forays into the Australian market at a cost to the domestic business, which found itself overtaken by rivals.

Ackerman passed up the chance to buy both Checkers, when it came unstuck following his departure, and OK Bazaars. Both were snapped up by Whitey Basson, who’d started Shoprite.

If there was a big mistake, conceded Ackerman, it was that he did not pay enough attention to global trends. The Australian lessons were expensive, though not fatal. But they became a substantial distraction, and while Basson and others were focusing on ensuring superlative distribution, Pick n Pay was expanding the store network without adequate distribution centres.

Christo Wiese recalled Basson once coming to see him with the OK offer and said to his lieutenant: “What if Raymond Ackerman buys it and brings the fight to you? Rather you buy it and consolidate the lower end of the market.” Basson did it, and quickly turned it around without the distraction of Ackerman competing in his demographic.

A big decision in the past decade was the appointment of an outsider as CEO. Ackerman had hand-picked Sean Summers and later identified Nick Badminton to run the business, but realised that the group needed to catch up with rivals. The business had been through three years of low growth, and the firm hired the incumbent Richard Brasher from Tesco in the UK. He, in turn, will be replaced in April by another international, the Dutch-born Peter Boone.

This week Ackerman turned 90 and wrote this open letter to all South Africans. It’s worth a read:

“To be turning 90 seems unreal. It’s a very long time, and if I think back on the many ups and downs, the difficulties we’ve been through as a nation, it’s quite amazing to be writing this at all.

“The past year has been brutal. So many families have been bereaved, so many breadwinners have lost their jobs, and so many businesses have gone under. At times, the situation has seemed hopeless.

“Yet we are still standing, and the way in which people have got on with life in the most trying circumstances and cared for one another along the way is a source of great hope for the future.

“It’s true we have enormous difficulties, like most countries, and some particularly SA challenges. We will always have difficulties, but I believe very strongly that we have a sound country.

“I think back to 1960, when many people were leaving SA, and my family and I chose to stay because we believed there was a great opportunity to work for the end of apartheid and to build a business in a new dispensation.

“The foundation of that business and the key to its success was the principle of consumer sovereignty – an idea I had learned at university and which was reinforced during a stay in the US.

“This is the recognition that the aim of business is not simply to maximise profit, as so many business leaders believe, but rather to respect and be a part of the community. Respect for everyone has been at the core of Pick n Pay’s success, and I believe it remains the key to our future as a country.

“My advice to anyone starting out in the retail business is to understand that to be successful in retail, you’ve got to really care about your community, care about your society, and care about your people, and thereby achieve your objective of being a successful retailer. It doesn’t happen the other way around.

“The role of business, perhaps now more than ever, is to give back and to do good, not only by keeping prices down and fighting with suppliers to keep prices low, but to help make changes in the country that affect people.

“In short, doing good is good business. If we rebuild our economy on this basis, our future will be secure.

“The other important thing is to be positive. I have a lot of faith in the future, and I’m not just saying that. Recently, I spoke in a meeting and I was talking about us being very positive about the next 60 years.

“They thought I was mad. They thought, well, he’s getting old and we don’t quite understand what he’s saying. But if I was not 90, I’d be planning very strongly for where Pick n Pay should be over the next 60 years. Yes, there are problems, there always will be, but actually what I miss most in retirement is tackling problems.

“We’ve always had to build Pick n Pay by trying to be positive, interpreting trends and having a vision for the future. It was never good enough to continue doing as we had always done – we had to inject new ideas into the business to keep it fresh.

“These are the qualities that I think will carry us through the tough times we’re experiencing now. We should never forget that, as hard as things may be today, they were infinitely worse not too long ago.

“Just as many people today feel things can only get worse, there was a pervasive sense of despair in those years. We were a country at war with itself and the economy was on a downward spiral. And then, as if by a miracle, Nelson Mandela was released and democracy arrived. Everything that so many had dreamed of suddenly came true.

“We are in a much better place today.

“I’m extremely proud of the way Pick n Pay and our consumers responded to the Covid crisis through the Feed the Nation programme, which helped to feed 20-million people in this difficult time.

“It was a reminder of the principles on which Pick n Pay was founded, of caring for the community, and the most exciting thing for me is that this principle has not only stood the test of time, but it has been successful. Without it, Pick n Pay would not be the business it is today.

“In South Africa, we have a sound future. You all have the strength and ability to make it a great one.”

Ackerman still, I am told, does store visits and regularly goes to the headquarters in Kenilworth, where keeps an office adorned with scores of family photographs and other memorabilia.

At 90, he’s got no intention of stopping any time soon.

Are SA shopkeepers really that bad?

Fishing for top management in pricey offshore waters is becoming a habit among retailers. What needs to change?
Money & Investing
9 months ago

The key is to find a way to offer affordable products, but not skimp on quality
Business
1 year ago

If it was easy, everyone would have a business empire. It’s not – that’s why the rest of us need to pay attention
Features
1 year ago
Next Article