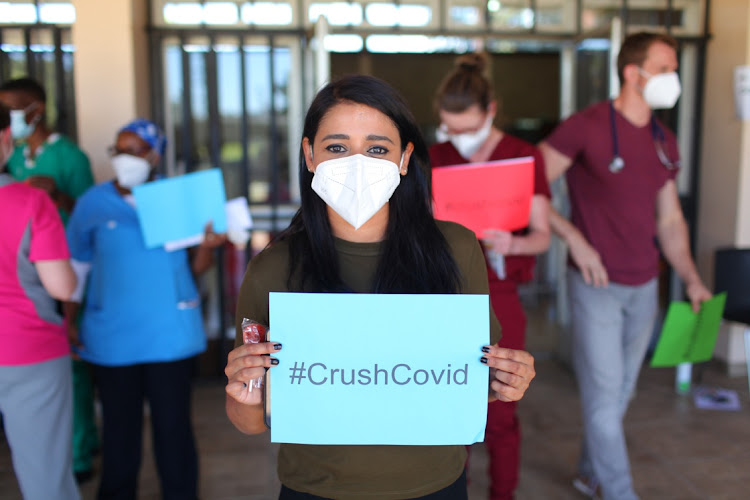 Now is the autumn of our disorientation.

In Joburg the sun is still blazing, but there is that undeniable chill the minute you step into the shadows. Winter looms and we’re clinging to the last few weeks of good weather on the highveld.

I went for a park walk this weekend and was struck by the sight of families scattered on picnic blankets and friends strewn around cooler boxes, celebrating baby showers and birthdays al fresco. Mostly they were masked and in smallish groups.

At a different park I passed, groups of worshippers stood under leafy trees, keeping to social distancing norms too.

Masks aside, these scenes were not any different from the ones we saw pre-Covid. They closely mimic the regular existence we were living this time last year, actually.

As we all settle into alert level 1, it’s easy to be numbed into a false sense of security. Yet the prospect of the third wave looms unseen and ominous. It seems inevitable.

We’re shocked by news of the Covid-related deaths of journalist Karima Brown and Absa deputy CEO Peter Matlare, but we have been reconciled to the fact that in our new existence we still go to braais, have drinks with mates and visit restaurants. This resumption of life is sanctioned by the level 1 lockdown. We can, so we do.

But in the absence of vaccines for everyone what we’re really doing is frolicking on the shore as we watch the sea suddenly recede. “Cool”, says a mate of the looming disaster, “we can walk all the way to that island over there; I’ll bring the chenin.”

We know how that party ends.

It sounds dramatic, but as Marc Mendelson, professor of infectious diseases at the University of Cape Town said in a Daily Maverick article about the threat of a flu outbreak alongside the next Covid-19 surge: “None of us knows when the third wave will hit, but most of us in public health and science believe our Covid-19 vaccination roll-out will not be quick enough to prevent this, nor subsequent waves.”

The smart actuaries at Discovery agree – except they’ve flagged Easter as a danger zone. Have a look at the fin24 piece that followed the company’s financial results two weeks ago, in which writer Londiwe Buthelezi reports how Discovery is anticipating the third wave.

“Discovery’s actuaries have calculated that if such a wave was followed by super-spreader events and there were reinfections during the Easter period before the rest of the population is vaccinated, this could increase expected deaths in SA to 92,000 people.”

It’s an alarming prediction precisely because Discovery’s data skills are so formidable. We buy a chocolate and talk on the phone in the car and Discovery knows about it.

An explosion at Easter makes sense, as it’s the next time we’ll all be on a break, some of us travelling, gathering and spreading the virus.

So what are our options?

Do we just wait, docile, for the third wave and the entirely unsubtle government knee-jerk reaction, where we wake up one morning and beaches and booze are verboten and home schooling is back on? The sort of reaction in which we devolve from level 1 to level 5 in 20 seconds flat, basically?

Or does the government announce that, in a bid to stifle the third wave, its nixing Easter this year? Would they then give us a heads up of this in advance — rather than the day before everyone heads off on vacation?

This week, Business Day wrote in an editorial that government “needs to show it has a plan”.

It pointed out that our political leaders haven’t said who’ll be eligible for the second phase of vaccinations, when this phase will start, and by when we’ll actually get enough vaccines to inoculate 67% of our population.

It added that after Easter, we’ll head into the colder months, when more people will congregate indoors. “It’s worrying that the government hasn’t come up with any sort of road plan about how to protect the wider population ahead of this eventuality,” it wrote.

Again, the government has a chance to be proactive and get ahead of the virus.

But for now, until it acts, we’re trapped in limbo — albeit one with good weather and nice wine. It’s confusing, unnerving; and there’s a discernible sense of an unrealised threat being just around the corner.

Investors ditch showy stilettos in favour of comfort, as the timeless Birkenstock attracts a €4bn buyout offer
Opinion
1 month ago

Whitney Wolfe Herd is now the world’s youngest self-made woman dollar billionaire, thanks to the cracking share price — but there isn’t much ...
Opinion
1 month ago

Clubhouse, for those of you who haven’t cracked the invite — and it is by invite only — is the new big thing
Opinion
2 months ago

Doesn’t it strike you that something has gone horribly wrong with the way we’re engaging with social media?
Opinion
2 months ago
Next Article

BRIAN KANTOR: Careful how you tax corporations, it ...