As we live through this heinous fever dream, just know that it’s entirely rational to be feeling flat or worried right now 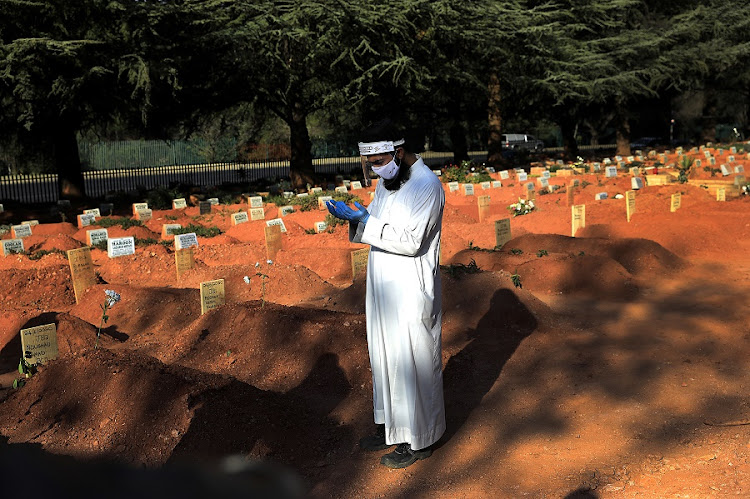 Westpark Cemetery, Johannesburg. The funeral of an 80-year-old man whose death was linked to Covid-19. Picture: Alon Skuy

I’m sure you’ll agree that psychologically speaking, the second wave of Covid-19 has hit many of us harder than the first.

Things feel notably grimmer this time around, partly because we all seem to know many more people who’re sick with the bloody virus, or, even worse, have died from it.

It’s bad for frontline workers and those who have lost a loved one, but even if you don’t fall into those categories, the mood is bleak.

My conversations are littered with talk of funerals and people lamenting lives struck down early. It’s alarming, devastating and unrelenting.

So, it’s no surprise that in this Sunday Times article last month, the SA Depression & Anxiety Group (Sadag) reported that “call volumes have more than doubled to 1,400 a day since the start of lockdown and continue to grow each month”.

As operations director Cassey Chambers put it: “We are getting more calls related to depression, trauma and suicide. We are receiving many complex cases, with many people really desperate, burnt out and overwhelmed.”

During the first wave last April, a Sadag online survey of 1,200 people found two-thirds were “stressed” or “very stressed” about the lockdown. The main issues were anxiety and panic (55% of respondents), financial stress (46%), depression (40%) and poor family relations (30%).

In the end, we survived that wave — only now the virus has resurfaced, meaner than ever. As we stumble into the middle of January, many of us are again feeling rising anxiety, depression or, at the least, discombobulation.

Could it be that we’re suffering from a coronavirus post-traumatic stress disorder of sorts? Are we only now properly reflecting on what happened when the virus rolled into town last March?

At the time, in this sudden sea of confusion, we rolled with the punches. The arrival of the coronavirus was even, in some perverse way, exciting. Our routine was up-ended: we stayed at home, we stockpiled wine, we played games online till the wee hours.

In hindsight, I realise that I’ve blotted out much of what happened in those first few weeks, perhaps as some sort of amnesia-like coping strategy. Either way, the months vanished in a haze of hand washing.

The weather is another factor weighing on us this time around.

The sly cruelty of a disease invisibly striking us down and confining us indoors, at a time of the year when South Africans are typically socialising and getting some rays, is more debilitating than we imagine. After all, as the warm weather hit in September, we all went back to behaving with a modicum of normality. Now we’re being punished for that.

What sort of feedback loop is that? And, to accentuate it, now we’re also all being put in the naughty corner by the government for things that bring us joy, like seeing family and partying. Put it all together, and you can sympathise with those who describe it as a complete mindf**k.

The devil comes in many forms …

In my case, I now dread the prospect of face-to-face social situations. Last week as I strolled around Zoo Lake, I spotted a runner, gloriously unhindered by anything resembling a mask and breathing heavily, sprinting intently in my direction. My blood went cold, and it was all I could do to stop myself vaulting into the nearby bushes.

Of course, many people don’t have the luxury of avoiding humans. It’s their livelihood, and facing 2021 without work, or having to deal with the angst of keeping their business alive, is even more petrifying.

Consider restaurant staff: either they’ve lost their income, or, if they’re lucky, they still get to interact daily with a virus that, on January 13 alone, killed 806 people.

And then there’s loneliness. Not for nothing does the UK have a minister of loneliness. That country has also just announced a £7.5m fund to fight the problem.

From old people who can’t see their families to those of us who spend all day on Zoom interacting with disembodied faces, the lack of real human interaction is a pervasive issue.

What’s really getting to me, though, is the anxiety of the unknown.

Where will we be in six months? When will we get vaccinated? What will happen if many South Africans refuse the jab — a plausible scenario since 47% told pollsters in December that they don’t trust the vaccine.

Discussing this with a friend, she argued that actually, the anxiety of the known is worse.

“We know the drill,” she said. “We’ve been through it all, and it sucked! Where do we find the strength to do it all again, when we haven’t even recovered from the first time around?”

At the risk of tipping you over the edge, we need to speak about this; we’re in a proper mental pickle. It means that if you need help, don’t be afraid to ask for it. For support, the Sadag finding help page is a good place to start.

All this said, and as we live through this heinous fever dream, just know that it’s entirely rational to be feeling flat or worried right now. So cut yourself some slack.

*Buitendach is editor of the FM’s Life section

BIG READ: Thrown into a spin by 2020, Gen Z pins its hopes on a Covid-free future