The world economy in 2020 was overwhelmed by the introduction of extreme Covid-19-related lockdown measures. Apart from the human tragedy associated with the spread of the disease, these measures forced the world economy into an unprecedented economic recession.

This has been accompanied by a substantial increase in unemployment, a loss of business and household confidence and a significant increase in debt.

It means that global GDP is on track to record an unprecedented decline of about 4.4% in economic output during 2020.

Understandably, in early 2020 governments and central banks quickly came under enormous pressure to respond to the crisis. This included a substantial increase in government transfers to support businesses and the household sectors, but also an increased effort by central banks to provide further monetary policy relief.

While some central banks, like the SA Reserve Bank, had scope to cut interest rates further, most major central banks did not, and were forced to expand their use of unconventional policy measures such as quantitative easing or yield curve control to provide financial market stability and sustain economic growth.

These policy initiatives manifested in a rapid expansion of both government and central bank balance sheets, especially in developed economies such as the US, the UK and the euro-area. In particular, most of the large central banks now own vast quantities of risky assets, including government bonds.

For example, by the beginning of October the US Federal Reserve had accumulated a phenomenal $4.88-trillion in US government bonds. This, compared with less than $600m before the 2008/2009 global financial market crisis.

The perpetual accumulation of government bonds by the large central banks effectively allowed governments to run much larger than normal fiscal deficits, confident in the belief that their central banks would continue to accumulate a significant portion of any outstanding government debt. 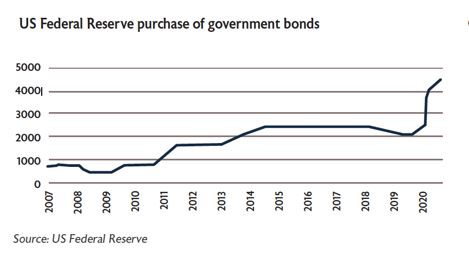 It means that what started out as temporary but unconventional monetary policy measures at the time of the financial market crisis in 2008/2009 has now become a permanent component of central bank monetary policy.

From a central bank’s perspective, they would argue that they needed to introduce this unprecedented set of policy measures to prevent the global economy from collapsing into another depression. Furthermore, central banks have vowed to withdraw the extraordinary policy measures once the crisis is over.

However, just as in the case of the quantitative easing that was enacted after the 2008/2009 crisis, shutting off the liquidity tap could prove more challenging than opening it.

This signals that there has been a paradigm shift in the management of monetary policy.

Most central banks can no longer afford to simply focus on only one primary policy objective, namely achieving their inflation target. Instead, they need to prioritise ongoing financial market stability while stimulating economic growth.

This change in the role of central banks runs the risk of severely undermining their operational independence, which they have fervently guarded for decades. At the same time it exposes the world economy to a series of largely untried and untested monetary policy strategies.

This represents an average annual growth rate in debt of over 6% — well in excess of the growth in global GDP over the same period. In addition, private sector debt (measured on a global basis) has jumped from $117.5-trillion during 2007 to $118.1-trillion in 2020. 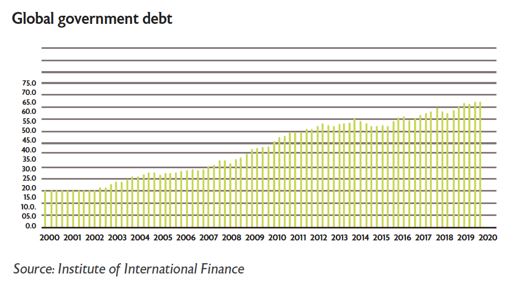 Now a government’s ability to increase or sustain a high level of debt is highly dependent of three key factors, namely:

While the maturity profile of government debt has not altered substantially in recent years, the current recessionary conditions have clearly undermined the collection of tax. Fortunately, this has been significantly offset by a sustained reduction in global interest rates.

A system as fragile as glass

So how does this all play out?

Under these circumstances, even a small increase in interest rates could derail the global economy’s fragile recovery. Knowing the danger of a premature withdrawal of the highly accommodative monetary policy, few central banks will be willing to risk a severe recession in the pursuit of policy normalisation.

In other words, no major central bank will want to be held responsible for crashing the financial markets because it started to reverse monetary policy without clear justification.

Even if the withdrawal of financial liquidity were to appear fully justified, it’s highly likely that it would still result in a significant sell-off in financial markets.

Moreover, with central banks now being the largest holders of many risky assets like government bonds, they will be especially mindful of how changes in monetary policy could damage the public sector’s own balance sheet, with dire consequences for stability in the broader economy.

Fortunately, in the short term global inflation remains extremely well-contained. Most countries now are more concerned about the risk of deflation than inflation. In fact, consumer inflation in the euro-area has averaged less than 1% during the past eight years, while in the US the average has been a mere 1.5% over the same period.

And, even if inflation does start to rise, the US Federal Reserve has already signalled its willingness to tolerate increases above its target of 2%. Its reasoning is that since inflation has been below 2% for a considerable time, it should rather focus on the average rate of inflation and not merely a point target of 2%. Hence, without a persistent increase in inflation many central banks may find it difficult to justify an exit from their supportive monetary policies.

But equally, should the fragile global economic recovery start to stall, it’s fair to assume that the major central banks will try to introduce even more innovative policy tools — such as the purchase of highly risky assets, active control of the yield curve and perhaps even greater use of negative interest rates.

Overall, the current global monetary policy of record-low interest rates and increased liquidity seems likely to persist for a considerable period, despite the obvious risks.

Under these circumstances, investors are having to change fundamentally how they take account of risk in constructing their portfolios. It means a traditional low-risk portfolio will provide a return well below the historical average.

And in the meantime, any sustained emergence of inflation in the world that might necessitate a tightening of monetary policy will make central banks, governments and investors extremely nervous.

*Lings is chief economist at Stanlib

CHRIS GILMOUR: UK is in an unprecedented, long-lasting slump, but SA can bounce back quickly

NEAL SMITH: Signs emerge of a bull run in emerging markets in 2021

RAYMOND PARSONS: Implementation of growth and fiscal plans could save SA from ...

NEAL SMITH: Signs emerge of a bull run in emerging markets in 2021

RAYMOND PARSONS: Implementation of growth and fiscal plans could save SA from ...

Hlophe battle for his job hots up as big guns join the ...

BRUCE WHITFIELD: You want us to own Omicron, Boris? ...

HILARY JOFFE: SA shoots itself in the foot with ...

PODCAST: Omicron — the good and bad news, with Prof ...