If there’s one positive that might come out of this trash fire of a year, it’s that there will surely be fewer of these forced festivities pockmarking the corporate landscape 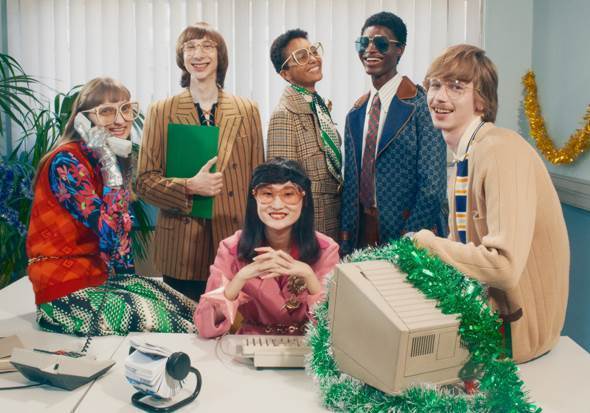 There’s the guy from finance who’s just made his fourth weird comment about vaccines. And the big boss who looks uncomfortable mixing with staff he’s never seen in his life, though they work in the same building. There’s Nathan from procurement, who’s drunk already, and that lady from logistics is energy vampire-ing everyone on one side of the table with stories about her dogs.

Ah, the festive season office party. What a moment of unrivalled merriment and pleasure. The culmination of months of hard slog and a celebration of team work.

If there’s one positive that might come out of this trash fire of a year, it’s that there will surely be fewer of these forced festivities pockmarking the corporate landscape. We’re up to our eyeballs in Zoom logins and “reply all” — so catching this one break might be nice.

I was reminded of this potential small mercy when Gucci’s holiday gifting video was released this week. It is, much like the rest of the handiwork of the brand’s creative force, Alessandro Michele, a triumph of unexpected cool and a clever commentary on the now.

The gamely sentimental and retro advert shoehorns in a range of Gucci products while managing, astoundingly, to make office parties — in this case, one set in 1994 — look like fun.

It has to be said, though, were I decked head to toe in the Italian luxury brand’s kit, I’d probably also be pretty buoyant, doing a conga line around prefab partitioned offices.

Gucci’s advert is especially smart, since it plays to the psychology of feeling often inexplicable nostalgia for things that happened roughly 20 years ago. (Dawson’s Creek is now on Netflix, need I say more.)

It makes us long for something that seems better in our memories than it really was.

It’s beguiling, though, and I briefly fell for it — suddenly I wished to be on the dance floor with all my colleagues, getting down to Only You by Yazoo. True, I did once go to a banging office opskop where everyone danced the whole night — but it was the kind of outlying occurrence worthy of a study by Malcolm Gladwell.

Most of the time, these pseudo shindigs are cringeworthy. Half the company makes an embarrassingly paltry attempt to dress to a theme, you queue for chafing dishes of rice, tragic “fun awards” are handed out, you drink a Fanta and then hope like hell no one important notices when you leave early.

Maybe a couple of colleagues partake in an illicit substance in the bathroom, while others stand around a braai despairingly, wondering why the kebabs are taking forever. It’s all wretched.

And the worst is that “management” think they’re doing everyone a favour by throwing some kind of event, on an ungenerous budget, when everyone would rather have taken home a Woolies voucher.

As the self-appointed queen of the Xmas bash curmudgeons, I can’t see any HR department’s attempt at any Covid-aligned cheer being much better.

This Australian ABC News article summed up some end-of-year offerings in the offing in Oz. Not to be too blunt about this, but it’s all about as enticing as a weekend at Mar-a-Lago with the now unemployed No 45.

Take one Australian law firm, which has narrowed down the titillating choices to this: “Individual teams can choose from a range of virtual events including game shows and trivia, cocktail making, Zoom discos and virtual karaoke.”

Hold me back. As one friend said to me: “After this year, the only way I’m participating in anything vaguely office party related is if they deliver a case of hard liquor to my front door.”

You might think I’m being unnecessarily miserable, but consider that by not having a Christmas party this year, you’ll be spared from having to awkwardly attempt a synchronised Jerusalema jig with your far cooler and more co-ordinated colleagues. Praise be!

*Buitendach is the FM's Life editor and editor of Wanted magazine.

The fashionable Los Angeles street is not the appropriate home base for any official working for a country that has to raise R2.1bn a day just to pay ...
Opinion
5 months ago

Suddenly, the things we only mildly clocked when tumbling onto the couch after a day at the office — the drawer that sticks, the ugly shower door — ...
Opinion
5 months ago

SARAH BUITENDACH: What the UK’s new Covid outbreak means for us, and anyone having sex

I don’t want to be a killjoy, but we ought to be watching what’s happening over the pond closely
Opinion
5 months ago
Next Article

Tips to upgrade your home office

The future of work

Tips to upgrade your home office

The future of work