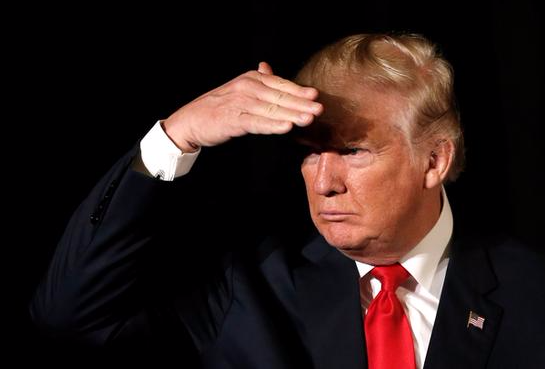 There is little that encapsulates the US response to the coronavirus crisis quite as succinctly as the theatrics around US President Donald Trump’s brush with Covid-19: bluster, bombast, denial, callous disregard, and a hefty dose of magical thinking.

From announcing his diagnosis on Twitter, to his astoundingly irresponsible drive-by to thank supporters outside Walter Reed hospital, to whipping off his face mask on his crowing return to the White House, to suggesting a vaccine will arrive “momentarily”, it’s been an exercise in the politics of spectacle – one utterly at odds with the lived experience of the average American.

What underlies this production of the absurd, of course, is hubris – and not just the vanity of Trump himself.

As New Statesman US editor Emily Tamkin argues: “Trump’s hubris is pure Americana. To pretend things are fine when they are not, to imagine the institutions of the state are sound and self-correcting, to look at the death, destruction, racism and harm committed at home and abroad, and continue to thump our chests and pledge allegiance to the flag – that is the American way.”

It masks, she says, the fact that “the republic is corroding”, beset by increasing inequality, systemic racism, a flawed electoral process, alienation, militarisation, war – “the belief that simply repeating the mantra ‘America is great’ will make it so”.

Not that this originated with Trump.

He’s at once a symptom of the slow unravelling of American society and a natural endpoint of that process. But the ineptitude of his administration – and the systemic shock provided by Covid itself – have made this unrelentingly clear.

As Canadian anthropologist Wade Davis writes in Rolling Stone, Covid has “reduced to tatters the illusion of American exceptionalism”.

In his essay – a paean to communitarianism – Wade traces the domestic disintegration of the US from World War 2 to the present, showing how the social fabric has been rent by the “American cult of the individual”.

“Covid-19 didn’t lay America low,” he writes. “It simply revealed what had long been forsaken. As the crisis unfolded, with another American dying every minute of every day, a country that once turned out fighter planes by the hour could not manage to produce the paper masks or cotton swabs essential for tracking the disease.”

The upshot, according to Wade, is that the US’s moral authority and global leadership are on the wane – and the defeat of Trump on November 3 is unlikely to arrest that. “For better or for worse,” he says, “America has had its time.”

The thread of incremental decline runs through Patrick Wyman’s comparative analysis, for Mother Jones, of the fall of the Roman empire and the current US polity.

It’s a fascinating read – and a salutary lesson for us in SA, too – about the “thousand tiny disasters that [amount] to a thousand little cuts on the body politic”.

Empires, he argues, seldom end with a cataclysmic disaster.

The end, instead, is “laid long before, in the text of legislation nobody bothered reading, in local elections nobody was following, in speeches nobody thought were important enough to comment on”.

Empires end through the slow erosion of their authority and reach – a process that can be “surprisingly banal”.

“Supply carts failing to arrive at some nameless fort because of a dysfunctional military bureaucracy; a corrupt official deciding to cook the books and claim taxes were collected when they really weren’t; a greedy aristocrat bribing that official instead of paying his bill; an aqueduct falling to pieces and nobody willing to front the funds to repair it.”

So while history may “focus on a twice-divorced serial philanderer and bullshit artist and make him the villain”, the reality of the US’s possible future downfall will lie elsewhere.

Of course, not everyone is of the view that the US is in some kind of a terminal decline. On the contrary, Michael Beckley and Jeane Kirkpatrick, writing for Foreign Affairs, argue that two trends – rapidly ageing populations and the move to automation – will fundamentally reconfigure the international system, cementing the country’s global dominance.

What will be eroded, however, is the US’s stature as guardian of the liberal international order.

It’s a relatively grim view of a possible future: the US as “rogue superpower – an economic and military colossus lacking moral commitments, neither isolationist nor internationalist, but aggressive, heavily armed, and entirely out for itself”.

It’s an “America first” trajectory that resonates with Trump’s foreign policy. But Beckley and Kirkpatrick point out that it’s hardly unique to the present administration.

If anything, they say, “the era of liberal US hegemony is an artifact of the Cold War’s immediate afterglow. Trump’s transactional approach to foreign policy, by contrast, has been the norm for most of US history.”

It’s an approach that has broad backing from Americans themselves.

In the face of demographic and technological turmoil, Beckley and Kirkpatrick sketch out various possible futures – each as depressing as the next.

The best we can hope for is that the US takes “an unusually generous view of its interests. It would need to subordinate the pursuit of national wealth and power to a common aspiration for international order. It would also need to redistribute wealth domestically to maintain political support for liberal leadership abroad.”

The odds of a re-energised, re-elected Trump mustering this kind of magnanimity and changing course are little to none. But even a different president may struggle to get that kind of buy-in.

We may, as Beckley and Kirkpatrick say, be witnessing “the dawn of an illiberal American century”.

The grant top-ups and special grant are due to fall away at the end of this month. Given the parlous position of the rural areas – and a regression ...
Opinion
9 months ago

Look no further than the Eastern Cape – where apparent wartime levels of hunger are met with callous disregard – to see the depths the government has ...
Opinion
9 months ago

It’s vintage Trump: should a drug be ready ahead of the election, he’ll claim all the credit. If not, he’ll lay the blame at the feet of the ...
Opinion
10 months ago
Next Article

GIULIETTA TALEVI: Why the markets will remain in a Trump storm for the next 27 ...

SARAH BUITENDACH: Once Covid is gone, what kind of a world will we have?

GIULIETTA TALEVI: Why the markets will remain in a Trump storm for the next 27 ...

SARAH BUITENDACH: Once Covid is gone, what kind of a world will we have?