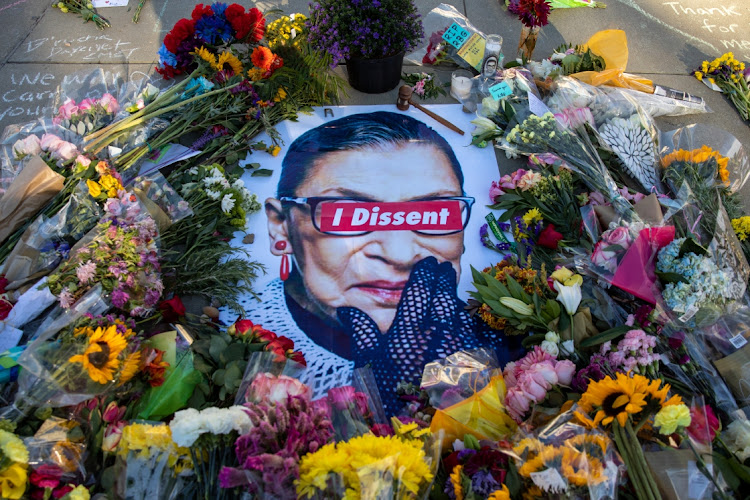 An image of Supreme Court Justice Ruth Bader Ginsburg sits surrounded by flowers during a vigil outside of the Supreme Court in Washington, D.C. Picture: Amanda Andrade-Rhoades/Bloomberg

It is testament to an extraordinary life and career that the international press this weekend was wall-to-wall coverage of US Supreme Court justice Ruth Bader Ginsburg — known affectionately to legions of fans as the “Notorious RBG” — who died on Friday night at the age of 87.

To gain a sense of her importance in US legal, political and cultural life, it is worth watching this New York Times obituary video entitled “The Radical Project of Ruth Bader Ginsburg”.

The extent of press coverage on her passing — and the affection with which she was clearly held by millions of Americans — is something of a marvel; how many countries, after all, could name any judge that sits on the highest bench of the land?

In fact, the adulation is something that South Africans may appreciate given the importance the judiciary holds as one of the last bulwarks of accountability in SA’s increasingly unaccountable and corrupt political life. Likewise, the repute that judges such as Dikgang Moseneke and Edwin Cameron have lent our courts since our democratic transition.

But Ginsburg’s passing marks not just the end of a long and brilliant career, it sets the stage for a monumental battle in US politics. President Donald Trump has promised to name his nominee to replace Ginsburg as soon as this week, prompting fury from Democrats and opposition from at least two Republican senators. It’s a critical time because the Supreme Court could be called upon to decide the outcome of a contested US election come November. And if the bench of that court is stacked with an overwhelming majority of conservative judges — two of whom would owe their appointments to Trump — the inference is that he may prevail as the country’s leader for another four years.

As the Financial Times editorial board wrote this weekend: “With her death on Friday, the Supreme Court’s conservative majority has lost its most tenacious opponent. Liberals have lost a figure they cherished more than most Democratic presidents. And the US has lost what chance it ever had of a ‘normal’ election. With six weeks left until voters choose a president, the question of when and how to fill Ginsburg’s place promises to crowd out most other subjects.”

You can read the rest of that piece here, while this Washington Post article is a fantastic summary of why Ginsburg’s passing is such a political earthquake.

But it’s not just US elections at stake.

In this article, Rolling Stone magazine probably sets it out best of all: “Basically every issue in American life eventually winds up before the Supreme Court.”

It is fascinating politics — and another layer of intrigue added to a year hell-bent on engraving itself on our hearts and our histories.

A trailblazing women’s rights lawyer before she joined the US Supreme Court, Ginsburg emerged as an unlikely pop icon in recent years
World
10 months ago

EDITORIAL: A meaner Ramaphosa must choose a leaner, ...

ISAAH MHLANGA: Go BIG in a commodity boom, but then ...