The decision to allow this form of transport to go back to 100% passenger capacity is reckless and misguided, given the clear evidence that close contact with infected people for long periods spreads the virus 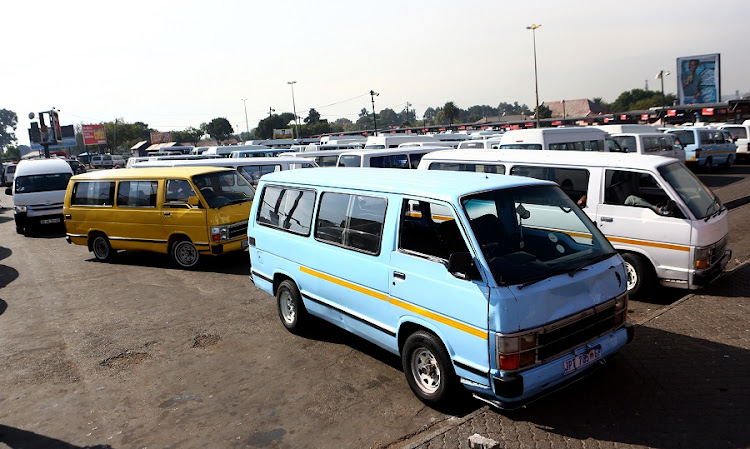 It’s ironic that, from Monday, schools are closed – yet taxis can roam the roads with full loads. Sure, the children are the future, but does that mean their parents are expendable?

Next to Eskom, you’d have to say the taxi industry must be one of the biggest threats to the economy. For too long the industry has been left ungoverned – so much so that it now has no hesitation in defying the government without a thought.

With an estimated 15-million South Africans using taxis to get to work and back home every day, any disturbance, such as a strike, has a disastrous impact on livelihoods.

But my experience is that taxi operators thrive on intimidating those who oppose them, and they have no problem using violence to make their point. It means that, during a strike, anyone who tries to find alternative transport risks getting intimidated or even beaten.

In recent days transport minister Fikile Mbalula first pleaded with taxis to follow the lockdown rules and then, when this was flatly ignored, said he wasn’t “afraid” of the industry.

Mbalula’s efforts to incorporate the taxi industry into formal channels are nothing new; they precede his term by a decade.

And yet the industry is still chaotic and violent. Three years ago 20 people lost their lives due to a war between rival taxi associations in Gauteng. Gauteng transport MEC Ismail Vadi closed the taxi routes for months – but this, obviously, fixed nothing.

Drivers also behave with impunity. In Tshwane, two years ago, when e-hailing services were being attacked by taxi operators, 21-year-old Taxify driver Siyabonga Ngcobo was shoved into the boot of his vehicle and set alight. Yet nothing happened to the taxi drivers who did this. No justice has been served.

In future years, history will harshly judge the way the government has tip-toed around the taxi industry during Covid-19.

Millions of South Africans are still waiting for the relief measures promised by the government, but the taxi owners don’t want to wait.

While Mbalula offered the industry R1.135bn as a special “relief payment”, the SA National Taxi Council (Santaco) said this was “not sufficient”, as it would amount to about R3,000 per taxi owner.

This, Santaco said, amounted to a “slap in the face”, and the organisation threatened to shut down in protest unless it was offered 300% more. Never mind that Mbalula’s offer was three times the amount offered to any other sector.

Last week President Cyril Ramaphosa buckled to the industry’s demands (well, more like its straight refusal to comply) and said taxis could resume carrying passengers at 100% capacity. And yet people can’t visit their families and are not allowed to buy cigarettes for fear of spreading Covid-19.

It just illustrates that the government just has no idea how to deal with the industry. The decision to allow taxis to go back to 100% capacity is reckless and misguided, given the clear evidence that close contact with infected people for long periods spreads the virus.

Three weeks ago the World Health Organisation warned that the virus may be airborne, in that it lingers longer in a given space than previously thought.

In a paper last month Kimberly Prather, a professor at the University of California San Diego, said the evidence shows that Covid-19 “is silently spreading in aerosols exhaled by highly contagious infected individuals with no symptoms”.

She said it’s “difficult to define a safe distance for social distancing”, but it’s clear that the amount of ventilation, the number of people, and the time spent in a closed space all play a role.

While public guidelines urge people to keep a distance of 1.5m, the glaring exception is taxis, where there is no space between travellers.

This, more than anything else, underscores how the government has left people’s lives to taxi operators.

Mbalula argues the decision to allow taxis to carry full loads was taken after consulting medical experts. But tellingly, he didn’t name any of these experts. Who are these people? Do they exist?

But this shoddy transparency is par for the course. Last week health minister Zweli Mkhize said none of the more than 70 scientific advisories on Covid-19 will be released to the public.

And justice & correctional services minister Ronald Lamola added that there is a “low requirement” for public consultations on regulations imposed by the government during this time.

In other words: the government can say they asked someone, but they won’t tell you who they asked, and they don’t owe anyone an explanation.

Is it any wonder their lockdown has lost legitimacy with the public?

And yet, people’s lives are at stake: the airborne studies suggest an infected person might board a taxi, infect not only the people they will be travelling with but also the many more who will board the taxi shortly after.

It’s another sign that Ramaphosa’s administration needs to seriously rethink its soft-touch approach to the taxi industry. The consequence of not doing that is an easy route of transmission for the virus – and that’s due to the government’s lack of backbone.

While the government is increasing restrictions elsewhere in the economy and reintroducing a curfew, it is relaxing them in the one place where viral ...
Opinion
9 months ago
Next Article