Because the majority of black South Africans remain voiceless and vulnerable, they’re abused by power-mad cretins emboldened by a gun and a uniform 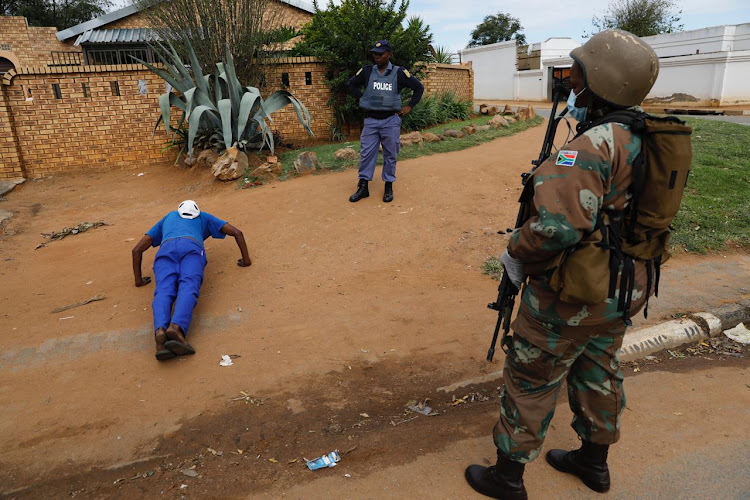 A policeman instructs a man to do push-ups during an operation in Eldorado Park. Picture: ALON SKUY

These questions were posed by Nomsa Montsha, the partner of Collins Khosa, on SABC news over the weekend. She’d been asked why Khosa’s death, after a brutal assault by members of the SA National Defence Force (SANDF), hasn’t sparked the same outcry as that of George Floyd, who died from asphyxiation on May 25 at the hands of the Minneapolis police.

Montsha was asked the question numerous times, but it was clear she wasn’t looking to become a symbol of anything; she just wanted justice for her family. “It’s very disappointing and unacceptable. We still believe we will get justice. We still believe those soldiers will be behind bars,” she said.

It’s a hope that appears to have been scuppered by an artless cover-up, in which an army “board of inquiry” cleared the soldiers of responsibility for Khosa’s death — despite Montsha’s evidence that they’d beaten him with the butt of a machine gun, slammed him into a cement wall, choked and punched him.

Implausibly, the army inquiry found no link between those events and Khosa’s death, hours later, of “blunt-force head injury”. The whitewash was so obvious, you wonder how Brig Viscount Ngcobo, who headed the inquiry, hasn’t already been axed. And how hapless defence minister Nosiviwe Mapisa-Nqakula, who spoke of how citizens mustn’t “provoke” the army and then allowed this report to be handed to court, remains in her job. 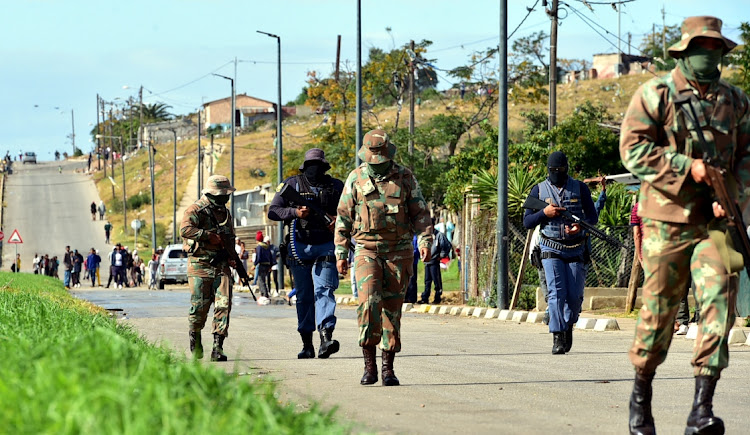 The SANDF and police patrol the streets of Helenvale. Picture: Eugene Coetzee/The Herald

It has created an awkward moment for the ANC. The party has rightly rushed to condemn Floyd’s killing, yet has been badly exposed as hypocritical for doing nothing to ensure those responsible for Khosa’s death — or the deaths of others during the lockdown — are held accountable.

Speaking at the 95th birthday of Rivonia triallist Andrew Mlangeni over the weekend, President Cyril Ramaphosa said Floyd’s murder “has opened up deep wounds for all of us”. Mlangeni had fought for all those who “suffer under tyranny and oppression”, said Ramaphosa.

But it’s hard to watch that interview with Montsha and not wonder how it is that Ramaphosa’s party is simultaneously blind to the tyranny inherent in Khosa’s murder.

The ANC would do well to heed the words of Archbishop Emeritus Desmond Tutu who, in a statement about Khosa’s death a week ago, said: “If you are neutral in situations of injustice, you have chosen the side of the oppressor.”

“The distasteful truth linking the deaths of Khosa and Floyd at the hands of security forces in SA and the US is that the lives of certain categories of people in our societies are considered more precious than others,” said Tutu’s foundation.

Earlier in the week, Ramaphosa had at least tried to address this, when he said the death of Khosa, as well as the others who had died at the hands of SA’s security forces, is “something that I deeply regret”. He spoke of how, globally, “racial profiling by law enforcement authorities and disproportionate use of violence is common”.

Yet, as broadcaster Thulasizwe Simelane wrote in both the City Press and Sunday Times yesterday, his government still does exactly the same thing.

Simelane described how SA’s most vulnerable feel the “full weight of a systemic culture of violence in the SA Police Service and SANDF, fanned enthusiastically by their political principals who tell them it’s OK to ‘skiet, skop and donner’ blacks in the villages and townships, especially if they ‘provoke you’”.

Can you, for example, imagine the police ordering white South Africans to do “frog-jumping exercises” or “roll on the ground”? The truth is, it wouldn’t happen. But because the majority of black South Africans remain voiceless and vulnerable, they’re abused by power-mad cretins emboldened by a gun and a uniform. 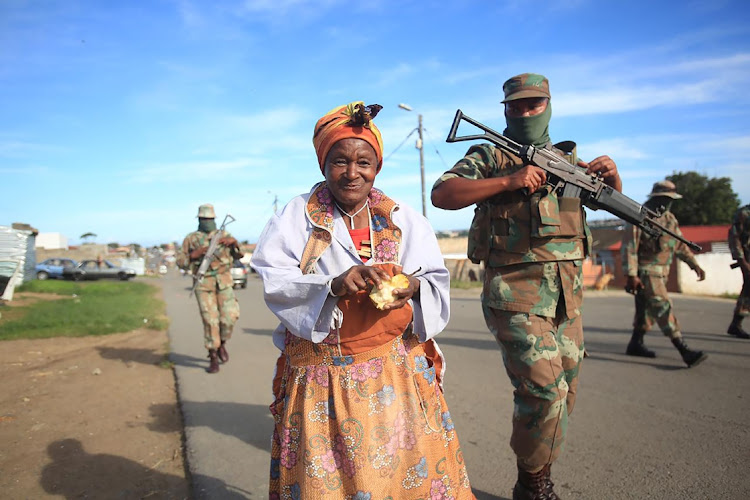 The reason it happens again and again, Simelane concludes, is simple: “Impunity; getting away with murder.”

We’re seeing that exact pathology playing out right now, in the nonsense report that might as well have concluded that Khosa “slipped on a bar of soap”.

And we see it in the response to many of the lockdown deaths, at least 11 of which have been linked to police brutality, and many of which seem as egregious as Khosa’s.

For example, Ntando Sigasa, 24, was assaulted by five police officers while walking to his father’s house in Soweto in April. They wanted to know why he was outside his home during the lockdown. “The group threw him to the ground, kicked and punched him for about 15 minutes before they told him to go home,” Kedibone Malema, Sigasa’s mother, told the Sowetan.

When he came back home, Sigasa couldn’t walk. Within days, he was dead.

Petrus Miggels, 55, was beaten by the cops with a hammer for buying beer during the lockdown (as if that was a justifiable response). Journalism group Viewfinder has done a fantastic investigation into Miggels’s death, drawing on eyewitness accounts, reporting how the police — shortly after saying “You people do not want to listen” — assaulted him, then dragged him into a police van.

“A short while later Miggels was dropped off near where he had been picked up. From there he walked to his house on Carnation Road. He died on the stoep within the hour,” writes Viewfinder’s Daneel Knoetze. And in front of his grandchildren.

Yet astoundingly, the Independent Police Investigative Directorate (Ipid) cleared the officers, telling Miggels’s family that he died of “natural causes”, because he’d had a “heart attack”. As if it was just bad luck that it happened that same day.

Initially, police minister Bheki Cele responded with characteristically misplaced bravado, saying it was clear Miggels hasn’t died from police brutality and the media must be careful to check the facts. Only, Ipid has now reopened its probe into Miggels’ death.

Cele evidently assumes we are a country of fools. And by the standard Tutu lays out, if Ramaphosa remains neutral in the face of this sort of injustice, he is aligning himself with Cele.

This week, Wits lecturer and author Rekgotsofetse Chikane wrote on News24 how we have somehow been lulled into believing these deaths are “an acceptable and justifiable cost under the conditions of the lockdown”. These deaths haven’t created the same energy that we see in the US partly because we’re not sufficiently outraged as a society.

It’s not clear why we aren’t. Last week, Ferial Haffajee wrote on the Daily Maverick of “a breathtaking level of police violence”, surpassed only by Kenya and Nigeria for toxic lockdowns.

“Ramaphosa risks acquiescing to the strongman culture embedded by Cele (whom he needs for political protection) by failing to say a single word about the growing police violence. It’s not over-enthusiasm, it is a jackboot lockdown and it is besmirching SA’s public health gains which Ramaphosa has rightly claimed kudos for.”

It’s no exaggeration. And it shows eloquently why Ramaphosa won’t have any legitimacy in addressing Floyd’s death in the US until he’s ensured accountability for the police killings happening under his nose.

Malema says we’re led by fools and non-thinkers. Just occasionally, he hits the nail on the head
Opinion
10 months ago

A bad week for Nosiviwe Mapisa-Nqakula

She has refused to discuss the matter, or accept responsibility for the report’s failure to interview Collins Khosa’s family
News & Fox
10 months ago

In thinking South Africans were going to timidly accept a whitewash, it seems that Nosiviwe Mapisa-Nqakula may have misread the mood
Opinion
10 months ago
Next Article

CHARMAIN NAIDOO: What can be done in nearly nine minutes? A long, slow killing, ...

Judge pulls state up over its power tripping during lockdown

Iron fist: the SANDF and the killing of Collins Khosa

Collins Khosa’s family turn to the Constitutional Court for justice

CHARMAIN NAIDOO: What can be done in nearly nine minutes? A long, slow killing, ...

Judge pulls state up over its power tripping during lockdown

Iron fist: the SANDF and the killing of Collins Khosa

Collins Khosa’s family turn to the Constitutional Court for justice