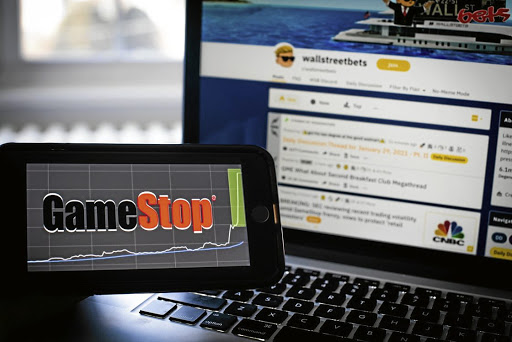 NURSING THEIR LOSSES: The heavy toll shows how moves by individual investors, which are regularly co-ordinated on forums such as r/WallStreetBets, correct have heightened the risks for professional investors. Picture: Bloomberg/Tiffany Hagler-Geard

Hedge funds are stepping up their efforts to spot the next GameStop after this year’s "meme stock" bonanza left the industry nursing huge losses. Hedge funds lost more than $12bn from betting against just GameStop, AMC and Bed Bath & Beyond, according to data group S3. "You don’t really know what stock the retail community is going to go after next," says Amy Wu Silverman, strategist at Royal Bank of Canada. "There is not a stock that is ‘safe’."

UBS plans to allow up to two-thirds of its staff to mix working from home and at the office on a permanent basis, betting the approach will give the Swiss lender an edge over Wall Street banks in recruiting.

The move to embrace a hybrid working model has been led by CEO Ralph Hamers, and echoes that of European peers such as Société Générale but is in stark contrast with the approach taken by several US banks, including JPMorgan Chase, which have ordered staff in New York back to work.