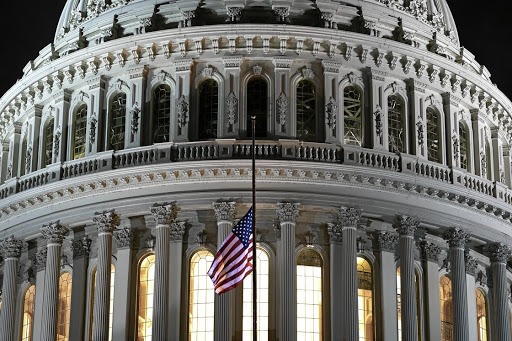 PAY UP! Under Biden’s plans, the US corporate tax rate would rise from 21% to 28%, a sharp reversal from the cuts rolled out under Donald Trump. The plan would also add a global minimum tax of 21% to target tax havens. Picture: Bloomberg/Stefani Reynolds

No sooner had US President Joe Biden’s $1.9-trillion stimulus package passed than attention turned to his big spending bill for infrastructure — and the tax rises that are likely to pay for it. For equity markets, the tax increases proposed by Democrats to fund the $2-trillion package could get quite costly quickly. Goldman Sachs has calculated that Biden’s tax plan would knock 9% off EPS for companies in the S&P 500 next year.

Out on their ear

Credit Suisse’s chief risk and compliance officer and the head of its investment bank are leaving the bank, which this week announced $4.7bn of losses from the blow-up of Archegos Capital. The Archegos loss will push the bank to a first-quarter loss of about Sf900m ($960m).

As a result, Credit Suisse suspended its Sf1.5bn share buyback programme and cut its dividend by two-thirds to Sf0.10 per share. The group also announced investigations by external parties into the events leading up to the Archegos debacle.

Archegos had a highly concentrated portfolio financed with leverage of more than 500%, and failed to shore up its collateral
Opinion
1 week ago

Republicans are already laughing off the plan over its corporate tax hikes, while some Democrats say the bill needs to be bigger
World
2 weeks ago
Next Article