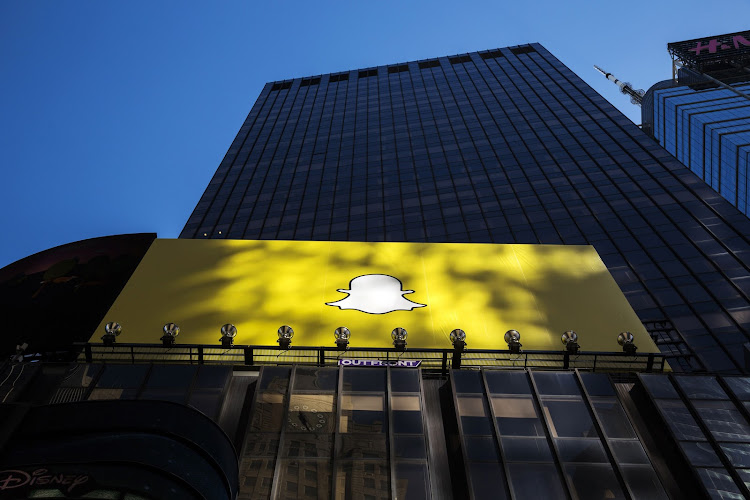 A billboard displays the logo of Snapchat above Times Square in New York. Picture: REUTERS/LUCAS JACKSON

The group previously forecast revenue growth for the upcoming quarter of 20%-25% annualised, and earnings before interest, tax, depreciation and amortisation of up to $50m. But it now expects results to miss these forecasts on the back of a “deteriorating” economy. The company has produced a total return of  about -69%  in the year to date, yet  it still carries a very expensive valuation, with a forward p:e of 70. It also has  a higher level of debt as a percentage of equity and  weaker operating margins  than its sector peers (Meta, Pinterest and Twitter).

We have seen historically high-growth stocks correcting and losing favour  against more defensive counters and interest-bearing asset classes. However, the extent of the recent correction suggests that value is starting to rear its head in the technology space once again. The US  Fang index, which includes Alibaba, Alphabet, Amazon, Apple, Baidu, Meta, Microsoft, Netflix, Nvidia and Tesla, represents top tech counters listed on US exchanges. While we favour most of these companies (perhaps Amazon and Tesla less so), Alibaba sticks out. It trades on the lowest forward p:e (12) relative to its peers, and its current share price is at roughly a 40% discount to long-term fair value, which is estimated at about $160.

Rowan Williams, portfolio manager at Nitrogen Fund Managers on what the smart money is doing
Money & Investing
3 weeks ago

Peter Armitage, CEO at Anchor Capital tells us what the smart money is doing
Money & Investing
1 month ago

What the smart money is doing
Money & Investing
1 month ago

BROKERS’ NOTES: Buy this CoreShares ETF, sell this Satrix one

Nerina Visser, independent exchange traded funds strategist and adviser, on what to buy and sell
Money & Investing
1 month ago
Next Article

Load-shedding to continue at stage 4 until Wednesday, ...