Diversity is strength in the investment research world

Commonality is comforting, which is why people seek out homogeneous social groups. It’s also why employers traditionally favoured this dynamic, believing that a homogeneous workforce created harmony and built consensus about strategy and outlook, leading to quicker decision-making and execution. But significant cracks in this theory have been exposed.

Diversity wins: the perils of groupthink

Homogeneity discourages debate and openness, which leads to complacency and a lack of critical thinking. This, in turn, creates an environment ripe for poor long-term strategic decision-making or, worse, corporate disasters through a culture of acquiescence and silence.

Huge corporate governance disasters over the years, and more recently such as the likes of Steinhoff, highlight the perils that groupthink creates through homogeneity across boards, executive committees and working teams, which foments the unquestioning environment for mismanagement and fraud to thrive. Consequently, all stakeholders lose out, from employees and investors to pension fund members and direct shareholders.

In the modern workplace, diversity increasingly wins. A growing body of research affirms that workplace diversity helps drive better decision-making and improves organisational outcomes, including financial performance. In fact, the 2020 McKinsey Diversity Wins report found “companies in the top quartile for gender diversity on executive teams are 25% more likely to have above-average profitability than companies in the fourth quartile — up from 21% in 2017 and 15% in 2014”.

A big contributing factor to this relative outperformance relates to the ability of non-homogeneous teams to think critically. Working with people who think differently creates cognitive dissonance, which can help workers overcome stale thinking to sharpen performance and improve outcomes. Granted, this cognitive dissonance often creates friction and disagreement but, when managed correctly, these group interactions can help build trust and respect over time within teams, which ultimately creates stronger organisations.

The culturally and ethnically diverse Investec research team provides an instructive example of the power that a culture of inclusivity and diversity can wield on organisational performance. “The team includes people from different ethnicities, genders and economic backgrounds. They each possess different skill sets and bring different experiences to the table,” says head of research at Investec Nkateko Mathonsi.

Mathonsi’s upbringing in rural Limpopo shaped her ability to network and grow, and she firmly believes that collaboration flourishes due to the team’s diversity, which is one of their greatest strengths. “While professionally we have all followed similar routes, it’s how we’ve been brought up and the experience derived beyond book knowledge and the beyond the office that truly defines how we see value and how we engage clients,” says Letlotlo Lenake, health care and pharmaceuticals research analyst.

This sentiment is echoed throughout the team with many, such as property analyst Nazeem Samsodien, who believes “diversity and cultural differences should not be viewed as an impediment but should be seen as an opportunity”.

According to a 2017 analysis of the sellside research sector in the US, higher levels of cultural diversity within teams can improve the accuracy of analysts’ consensus forecasts by reducing optimism bias, for example. “Higher levels of cultural diversity could lead to more accurate consensus forecasts if analysts from different cultural heritages incorporate their perspectives into their forecasts and their rivals learn about these perspectives and update their forecasts accordingly.”

Energy analyst Herbert Kharivhe understands the importance of insights and perspectives in a range of important economic sectors; that he doesn’t have to be first to market with an idea, but rather needs to offer a thorough and different perspective.

Anthony Geard says diversity affects the lens through which he views companies and market trends. “I place a high value on environmental, social and governance considerations and long-term consequences, for instance.” He has worked at Investec Securities as an investment analyst since 1999 in Joburg, London and Cape Town. 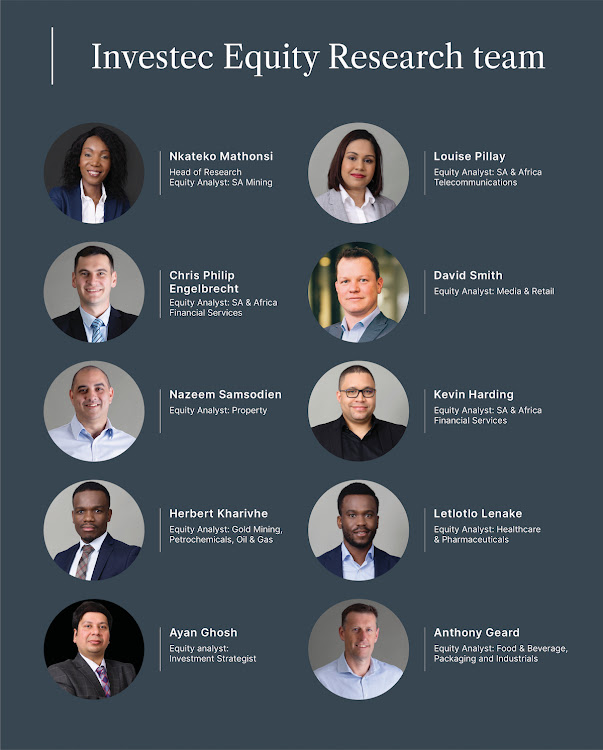 The performance of Investec’s diverse investment research team affirms that broad perspectives help to positively shape thinking. “Channelling these diverse perspectives into our work and interactions helps the team provide industry-leading analysis and investment advice, which can make the difference between outperformance or underperformance in portfolios,” says senior financial equity analyst, Kevin Harding.

Thorough investment analysis, while being time-sensitive, is where the team differentiate. These insights can help businesses make informed critical decisions. Additionally, constant development and learning is a prerequisite for being an analyst and it’s this mindset for discovery that creates a platform for diversity to thrive.

This level of comprehensive and impactful research and thinking is more important than ever due to the unprecedented risks businesses face today.

Retail and internet analyst David Smith says the world we live in and the factors that drive the companies he analyses will look different in a year, never mind three or even five years from now. Smith moved about a lot as a child, which he believes exposed him to different cultural nuances, helped him understand how easily things change, and influenced how he thinks about the world.

It is these different upbringings, world views and environments that have shaped a curiosity within the team that helps them distil the global and domestic political and macroeconomic backdrop. It’s also the collaboration with team members from different backgrounds and perspectives that have transformed mindsets, a much-needed outcome in this space.

“This is truly a case where the whole is worth more than the sum of the parts,” says Louise Pillay, an equity analyst for SA and Africa telecoms. “Our diversity is difficult to find in this type of industry. Couple this with strong mentorship and many collaborative efforts truly sets us apart from our peers.”  Equity analyst Chris Engelbrecht adds that learning from arguably the best analysts in various industries is an unmatched opportunity.

Diversity has instilled a strong work ethic within the team. “The passion for winning individually and as a team is inspiring and invigorating. The care and willingness to help one another, and our honesty and openness hold the team together. But it’s a corporate culture that embraces diversity and prioritises inclusion that makes it possible to harness our diversity as a strength and a competitive differentiator,” says Mathonsi.