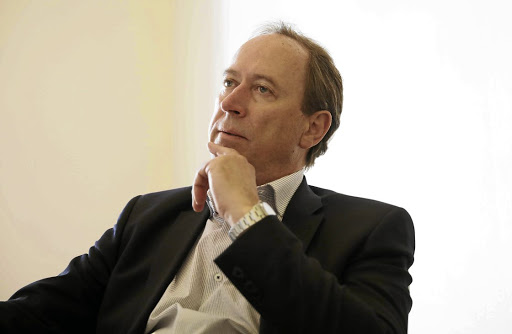 Sasol’s shares hardly budged on the confirmation that it has decided to scrap a deeply dilutive $2bn rights issue, though the stock is up 52% in the year to date on expectations that it wouldn’t need this after all, given a sturdier Brent crude oil price. But dividends are still some way off, notwithstanding a threefold leap in first-half headline earnings to R15.3bn, or a big drop in its debt, to R126.3bn. The FM spoke to CEO Fleetwood Grobler and executive vice-president of energy operations Bernard Klingenberg.

You’ve loudly touted a recovery in headline earnings, but if you strip out noncash adjustments — worth R12.9bn — earnings actually went backwards. Operationally, how good were the six months really?

FG: Ebitda [earnings before interest, tax, depreciation and amortisation] is a much better proxy for cash generation. Our normalised ebitda for all these special events were reduced by 6% year on year. But you need to see that against a backdrop of average Brent crude prices being 23% lower, refining margins 40% down, base chemicals basket sales 6% lower and ethane feedstock costs in the US 19% up.

On top of that we lost 300,000t of product sales through hurricanes Laura and Delta. Under those trying circumstances we increased gross margin to 45%, we cut our cost on a normalised basis by 10% and we lowered capital expenditure by up to 65%.

So you’re saying it’s fair to describe these results as a good performance?

Sasol has clearly been helped out of its rights issue by the stronger oil price. JPMorgan and Goldman say oil prices could hit $100 a barrel. What is the likelihood of that?

FG: The Sasol view is that this space is going to be very volatile, and we prepare our business to be sustainably profitable at a $45 oil price. That’s the base case we plan for, which I think could be back on the table easily, given the many factors playing in. The market is just too volatile for you to hang your hat on any predictions.

You’re going ahead with a $760m gas project in Mozambique, but investors may be wary of the final cost, given the overruns at Lake Charles. What assurances can you give that it’s not going to be another disaster project?

FG: First, the size of above-ground investment and complexity is the same as we’ve done with the central processing facility when we established it. So there’s no new risky technology; it’s stock standard, we know what we’re in for. That type of surface facility is less complex than the least-complex unit we built at Lake Charles. As far as the flow-lines coming from the wells are concerned, we’ve done that before. All these projects we’ve executed in Mozambique have been within the costs we set out. We have taken some very experienced people who were part of the recovery of the Lake Charles project; we brought them into the project team. So I think we’ve learnt quite a bit in the past five years. I would venture to say we’re in a good position to deliver it within the guided costs.

Are you worried, though, about the Islamic insurgency in northern Mozambique? French oil major Total last month started evacuating workers from its liquefied natural gas concession area, for example.

FG: You need to keep in mind that the Rovuma offshore gas field is the best part of 2,000km north of our fields in the south. So the distance just to southern Mozambique is vast and I think the governments of Tanzania and Mozambique have come to some sort of understanding of how to deal with the insurgency. I think the government is quite aware of what is at stake and will do all in its power to make sure it arrests the insurgency, but specifically that the southern Mozambique part is kept whole.

There’s been an outcry over the noxious gases that enveloped Gauteng recently. SA has allowed emissions for sulphur pollution to double to 1,000mg a cubic metre. But just because you can emit more, should you? Doesn’t that make you a risk as far as investors with strict environmental, social and governance standards are concerned?

BK: For older plants like ours and others in the industry, to try for the 500mg level is quite a challenge. Getting to 500mg would have required flue gas desulphurisation, which would have had so many unintended consequences, irrespective of the cost, which is prohibitive. The work of the [state’s] technical committee culminated in the statement last year that existing facilities should target 1,000mg. We are at 2,000mg, which is already a significant reduction.