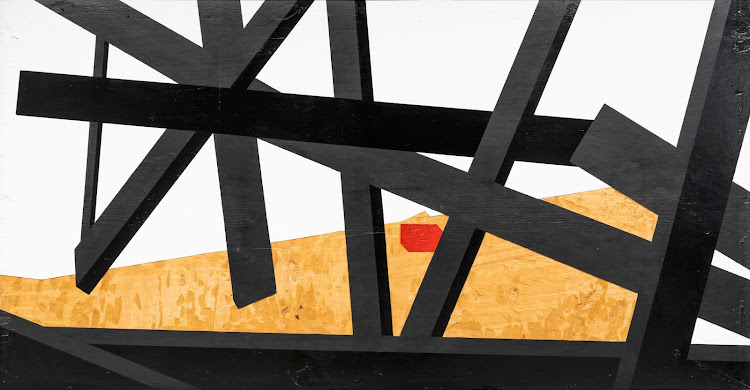 Aspire Art is auctioning a rather intriguing collection of art this month. It’s a private collection — it isn’t letting on whose; just that it’s a “single-owner sale” — of more than 120 works. They’re all contemporary SA and African artworks, crystallising a host of up-to-the minute questions and points of discussion about the here and now. In fact, along with some of the bigger names like Athi-Patra Ruga, Serge Alain Nitegeka and Ed Young, a lot of the artists in this collection are just breaking through, which is probably where the “future” aspect of the exhibition titles comes in. 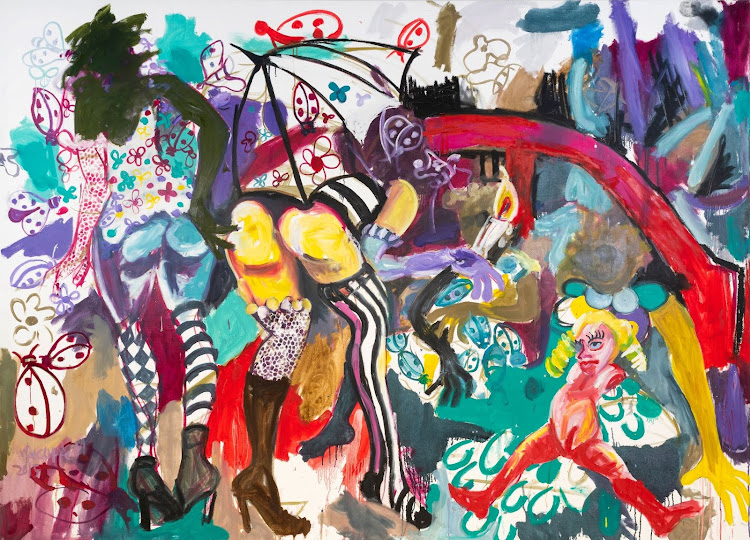 There are works by 2021 FNB Art Prize winner Wycliffe Mundopa, who art critic Ashraf Jamal argues is the quintessential painter of modern African life, capturing something of the contemporary urban moment. Jamal says that. just as the 19th-century French poet Baudelaire captured his era’s Paris, Mundopa, who is from Zimbabwe, captures the aura of African cities. Jamal calls his work “an inner-city, cosmopolitan, African experience and experiment with modernity”. His decadent, carnivalesque visions of a grotesque and darkly comic urban underground, he argues, capture a highly charged and distinctive but fleeting moment. (It’s worth noting that Jamal was on the jury that selected Mundopa for the FNB Art Prize, and contributed to Aspire’s catalogue, so it’s safe to say he’s a fan.)

Similarly, there’s a sense of the contemporary African condition more broadly in works by Nitegeka, a Rwanda-born artist who explores the dislocated experience of refugees and migrants. As a child, he found himself fleeing both Burundi and Rwanda, so he knows that experience only too well, but it is an experience that has become highly pertinent throughout the world in our own time. Nitegeka’s works often involve almost abstract-looking sculptural installations and paintings, and have done much to imaginatively convey something of an experience of obstruction, complication and alienation that is otherwise difficult to understand, as widespread as it might be.

This is indeed a collection preoccupied with the fleeting moment. There’s an interesting thematic thread running through the collection, however, that seems to betray a particular preoccupation with contemporary masculinity in this context. Several key works involve the artists using their own images in their artworks, as if trying to discover or convey (or baffle) something through their own appearances. So we’ve picked three of our favourites from the collection: Young, Ruga and Mohau Modisakeng. 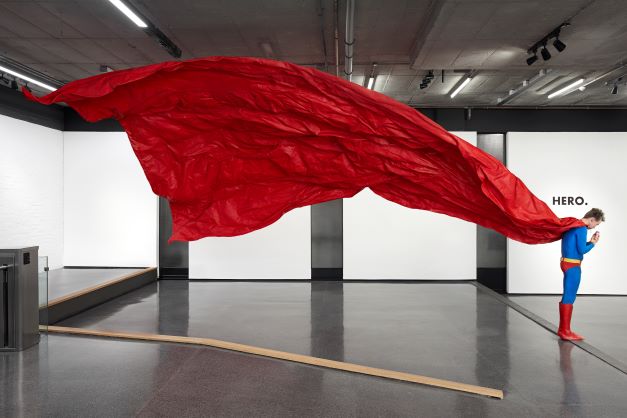 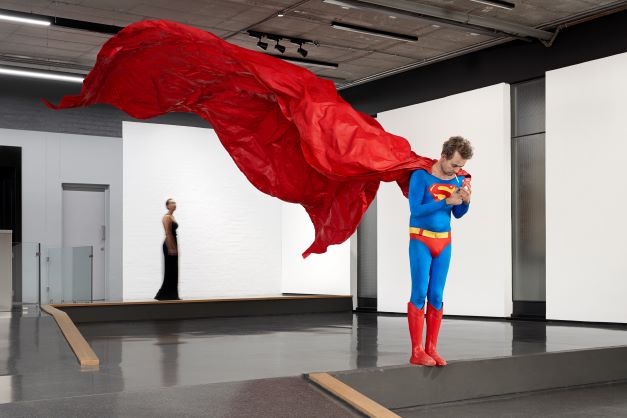 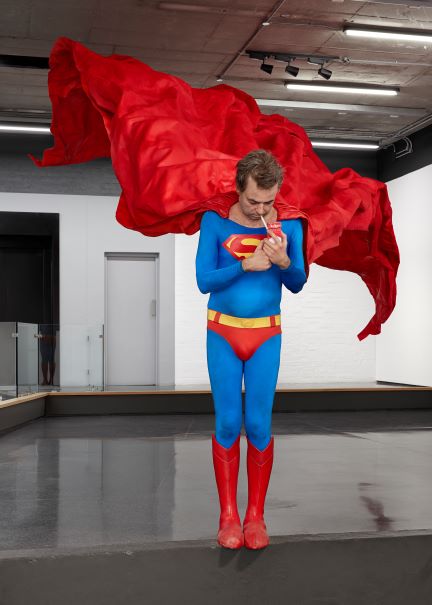 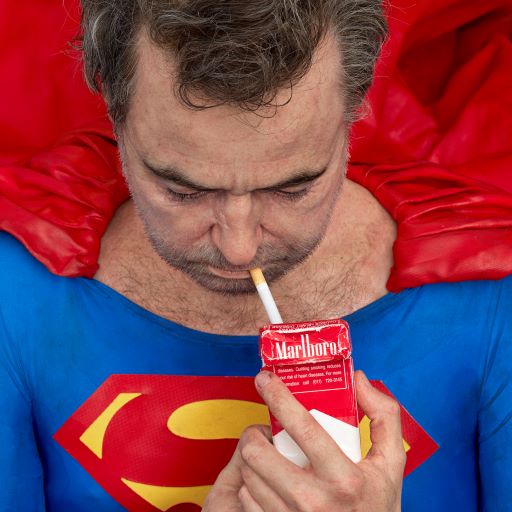 The hyper-real quality of Young’s Hero, a depiction of himself as a dishevelled superman on a smoke break, is mesmerising. The detail is astounding. The intersection of the pop-cultural mythology of “heroic masculinity”, as so many commentators have labelled it, and the intensely detailed banality of the flesh in this work captures a funny crossover between the monumental sculpture and the very anti-monumental anti-hero. And yet, the sheer spectacle of the work’s execution betrays a kind of heroic effort to achieve what Alexandra Dodd calls “perfect imperfection” in her write-up.

Even as the sculpture becomes a kind of monument to the anti-monumental, so the fantasy of white, male capitalist heroism clings to the figure who has abandoned it. This slightly paunchy, disillusioned little man, however, so closely resembling the artist, embodies intense, exhausting levels of self-scrutiny. Yet, he seems unaware of the sheer wonder of the gravity-defying, outsized billowing cape behind him. The looping contradictions of the piece, beyond even its uncanny realism, give it an artistic vitality charged with the urgent unsettling question: what’s next? 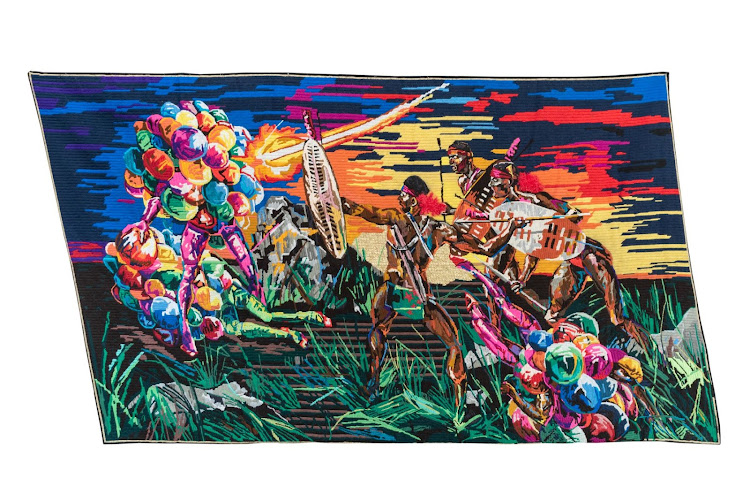 Ruga’s work is full of mischief and wit, but anchored by a kind of seriousness and skill that makes all his fun and cleverness rather profound in the final analysis. He plays around with his own black, queer story, and all sorts of religious and cultural iconography, inserting representations of himself or figures from the pantheon of characters he’s invented into the images and stories we’ve told ourselves about ourselves and the past. In Imini Yomjojo (Judgement Day), we have an image of the artist himself as a black Madonna in one work and his “Future White Woman of Azania” character — all stockinged legs and balloons — into a war scene with Dingaan’s soldiers in Invitation… Presentation… Induction.

The fact that his medium in these works is tapestry, historically a feminine craft, turned into a camp African art form, further unsettles our readings. But in the final analysis, Ruga’s games with masculinity in various cultural contexts, while both unsettling and humorous, embody genuine complexity of the kind that goes way beyond the oversimplified binaries that characterise contemporary identity politics. There’s a kind of peaceful optimism in these works that doesn’t detract from their profundity, which is itself a rare feat. 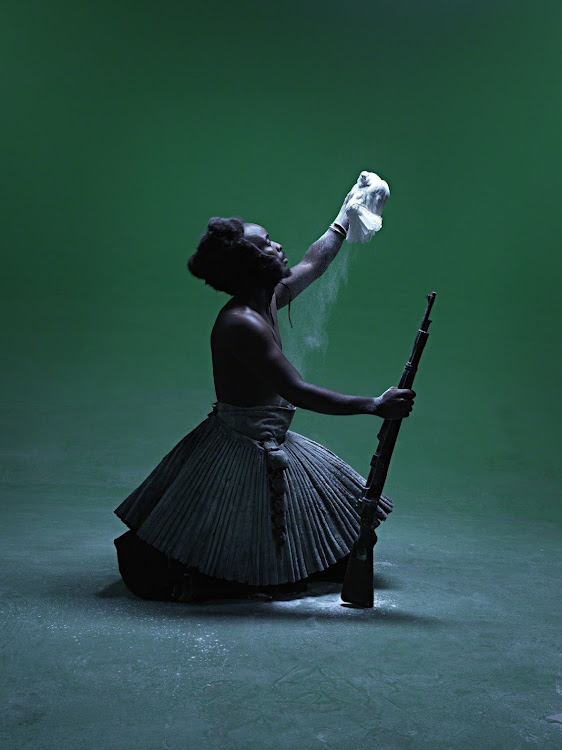 The somewhat unreal, dreamlike space that Modisakeng conjures in these works evokes the trance-like state and visions one might experience in ceremonial or sacramental rites, perhaps an attempt to find oneself by communing with the ancestors. In the catalogue, art critic Lwandile Fikeni draws attention to “the visibly modern” character of this spiritual realm in Modisakeng’s large-scale photographs, or, in another write-up, what Jamal calls their “simulacral and stylised quality”. The contemporary props and garb, with their own kind of symbolism, also enter what perhaps should be an ancient space, but is not. We see an image of modern African masculinity caught between the past and the present, tradition and modernity, the spiritual and the political, violence and peace. We see a pregnant moment — a kind of uncertain instant of potential, which Jamal characterises as “a seismic conceptual and aesthetic shift”.

Something new for SA abstract art

SPONSORED | This is your chance to add a significant work by a local legend such as William Kentridge, Marlene Dumas or George Pemba to your ...
Life
3 months ago

The state of the arts

Graham Wood spoke to nine insiders to cobble together a picture of where the art world is now, and what the post-pandemic art landscape might look ...
Life
4 months ago
Next Article