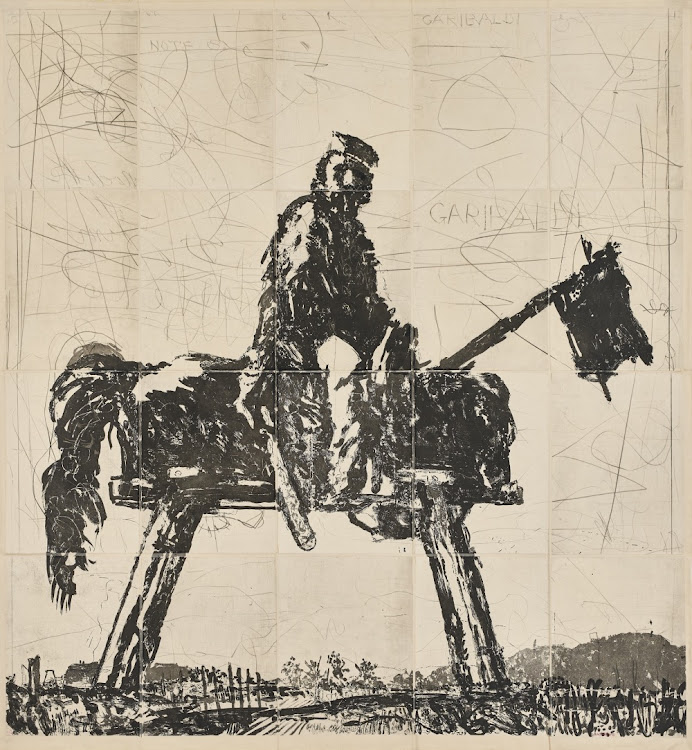 This spring, Aspire returns to Cape Town with an auction of modern and contemporary art on September 29 and 30. Presenting an outstanding collection of 132 works by 80 renowned artists, the auction will impress collectors with an exciting and considered selection of artworks.

With a strong focus on SA art, the sale also represents artists from eight African countries (Benin, Cameroon, DRC, Ethiopia, Kenya, Nigeria, Uganda and Zimbabwe) and international artists from Europe the UK and US. Reflecting the spirit of our time, more than half of the artworks on offer are by artists of colour, and women artists feature prominently. Important and significant historical works are presented alongside a diverse collection of contemporary art, which includes photography and new media work.

Headlining the contemporary section is a special collection of 10 lots of remarkable prints by William Kentridge, spanning nearly three decades. The leading lot is a monumental depiction of Giuseppe Garibaldi. Portrayed on a wooden horse, the image of the great general is comprised of 20 etchings mounted on raw cotton cloth folded and housed in a handmade box. Other prints such as West Coast Landscapes, the Universal Archive series and The Battle Between Yes and No, showcase well-known themes, a wonderful range of printmaking techniques and the unsurpassed technical accomplishment for which the artist has gained worldwide recognition.

As a sustained surge in demand for works by William Kentridge shows, SA is witnessing the emergence of a vital new art economy. The FM delves into ...
Features
8 months ago

One of the first to see the photographer’s potential, the Goodman Gallery founder would be pleased with his miniretrospective, TALL SHIPS
Opinion
1 year ago

A highlight is a group of paintings by Robert Hodgins featuring the comic and poignant work Left out of Making Love in the Shadows in which he hints at the delights and dramas to be discovered in the shadows. Two early paintings from the Pink Suite: Trojan War titled Menelaus and Paris and Helen show off his signature style of expressive draughtsmanship and glorious colour and in Men with Structures I, Hodgins makes his acute sense of humour evident.

Sculpture is a prominent and powerful medium in local art, and the auction focuses on a unique and impressive body of sculptural works led by Edoardo Villa and Sydney Kumalo, arguably Africa’s greatest modernist sculptors.

Villa’s powerful early work Sculpture III from 1969/1970 is notable for its balance of rest and momentum, achieved through the sculptor’s mastery of generous proportions, spatial dynamics and highly finished surfaces. While his forms are abstract, they retain a sensuous organic quality that references the human body and social interaction. 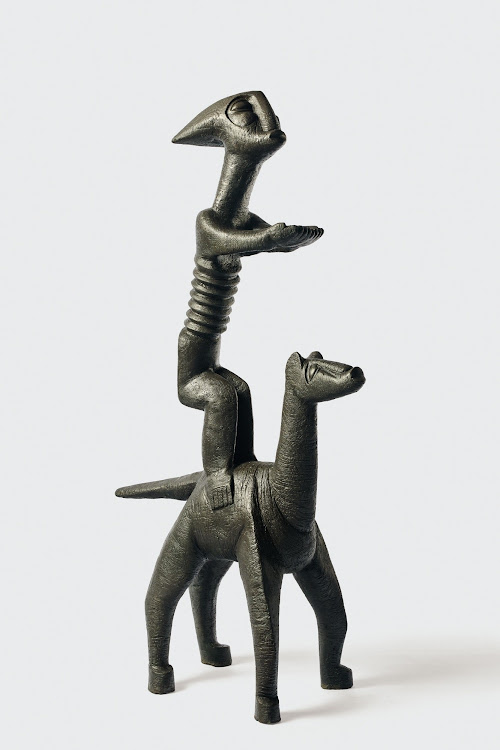 Study for Mythical Rider II, produced in 1970, is typically a major motif in Sydney Kumalo’s oeuvre, famous for his powerful figurative bronzes. Drawing on his deep pride in Zulu traditions and the rich cultural influences of growing up in Sophiatown, Kumalo has created a poignant figure, with hands extended in supplication to the universe ­­— an impressive symbol of humanity in harmony with nature. Large Seated Woman is also featured.

Other contemporary sculptors represented are Norman Catherine, Dylan Lewis, Gerald Machona, Stefanus Rademeyer and ceramicist Nico Masemola. Look out for Miniature Figure III by British modernist, Lynn Chadwick RA, who in 1956 was awarded the coveted prize for sculpture at the 28th Venice Biennale.

Art historical treasures for seasoned collectors include two exquisite still-life paintings painted in 1948 by Erik Laubscher during his time at the Anglo-French Art Centre. Paintings from the artist’s “London Period” are rare and remain highly sought after, as well as a collection of early, small-scale Alexis Preller works showing the artist’s experiments in subject, style and medium.

Landscapes have always been an integral part of SA painting and remain an important collecting category. A selection of important and valuable paintings by master landscapist JH Pierneef alongside Ruth Everard Haden, Maud Sumner and the much-loved Cape painter Hugo Naudé magnificently capture the beauty and light of the local landscape.

Available on auction for the first time locally is a striking, large-scale still-life painting by leading contemporary Swiss artist Uwe Wittwer. The artist’s work rarely comes to auction and Aspire is proud to debut Wittwer with this exceptional work.

Other newcomers to auction in SA are Kenyan artist Richard Kimathi and  Cameroonian Moustapha Baïdi Oumarou. Already established at auction in Nigeria and having featured in London and Paris, Nigerian artist Gerald Chukwuma debuts locally with Adam and Eve — a monumental work painstakingly created from wood and recycled objects.

The live auction will take place from Aspire’s new gallery space at 37A Somerset Road in De Waterkant. Buyers are invited to join for in-room bidding or make use of Aspire’s real-time online bidding and telephone bidding platforms.

The preview exhibition is on display in the gallery and can be viewed from Monday to Friday between 10am and 4pm.

A fully illustrated auction catalogue is available and can be downloaded on the Aspire Art Auctions website.

This article was paid for by Aspire Art Auctions.

1.
The rebirth of the Rand Club
Life
2.
Hillbrow: Then and now
Life
3.
Joburg’s lost hotels
Life
4.
New Cape Winelands airport set to be ‘Lanseria of ...
Life / Travel
5.
How Woolworths got left in the dust by Sixty60
Life / Food

1.
The rebirth of the Rand Club
Life
2.
Hillbrow: Then and now
Life
3.
Joburg’s lost hotels
Life
4.
New Cape Winelands airport set to be ‘Lanseria of ...
Life / Travel
5.
How Woolworths got left in the dust by Sixty60
Life / Food