the mark of time

The rise of SA’s tattoos industry

The perception of tattoos has changed in SA. So has the industry. Michael Schmidt inks a tale of its development

When I was five years old, Sandton was still a pig farm and my uncle was the only one in the family with tattoos — and then only because he was in the merchant navy and had crossed the equator.

Today, Sandton is Africa’s wealthiest high-rise enclave and the suburbs around it support more than 20 tattoo parlours, with a similar density in SA’s three other big cities of Pretoria, Cape Town and Durban. An estimated 700 parlours nationwide turn over perhaps R60m a year.

Except for the gudna of traditionalist Indian grandmothers, tattoos were once the mark of Cain, of seamen, prostitutes, criminals and outlaw bikers. Over the past two decades they have transmuted into badges of artistic edginess sported by everyone from soccer moms to hipsters affecting a trendy cool, from students hailing their hip-hop heroes to professional athletes making a canvas of their musculature.

This transition from pariah to preferred status was traced for the FM by Quiet Mnqali, an always impeccably dressed veteran punk-rock biker from the heyday of Rockey Street in Yeoville. Born in Kokstad in southern KwaZulu Natal, he moved to Joburg in 1980, aged 14.

He fell in love with the rock ’n’ roll culture he saw on TV, and was soon joined by his brother Mike and mate Lucky Mogale in starting SA’s first black punk band, Question Mark. But jamming for the punk underground didn’t pay the bills. 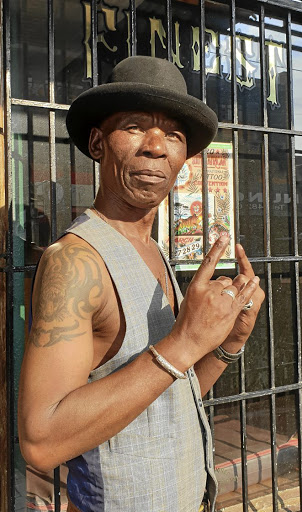 So the three started a leather shop in Ellis Park called LMQ, selling homemade winklepickers and other subcultural clothing at the stalls of the Market Theatre on the weekends, which earned them enough to relocate their shop to vibrant Rockey Street.

"At that time," Mnqali recalls, "the only guy who had a tattoo shop was one white guy in Pretoria Street. He sounded very British, his name was Lance; he had a motorbike that he parked outside his tattoo shop.

"If you look back, in those days, if you had tattoos you were a really hardcore person, and it wasn’t cheap because they had to import the ink and the machines. We saw this guy and we were fascinated; and we moved to Rockey Street, and across the road happened to be some Hells Angels who used to come and park their bikes there and do some tattoos."

Kevin Brown, then Hells Angels president, gave Mnqali, aged 20 in 1988, and his crew their first ink for free. "He was amazed that these black guys wanted tattoos," says Mnqali.

With their stovepipe pants, 14-hole Docs and leather jackets, "we were the only ones and we said ‘Let’s show our sign’ because we were the founders of the black punk movement, we were anti-rule".

In Brown’s view, apparently, Mnqali’s group had earned their chops by resisting harassment by the apartheid police and by virtue of having formed the city’s first black bike gang too.

Mnqali’s first tattoo was of the head of a tiger on his right shoulder, haloed by the heavy black twisting spikes of the neo-Bornean style popularised by Filipino-American tattoo artist Leo Zulueta — which became almost ubiquitous in the 1990s, as apartheid conservatism died and tattooing took off in a country searching for new identities.

The craft has a tradition of apprenticeship, but many of the new wave of SA inkers were entirely self-taught, like Tyran Luzzi of Tattoo Crew in Westdene, Joburg.

He was inspired by growing up with biker uncles and a father who were inked in the 1960s. One day in 1996, on his way home from work at a construction site in London, he stopped in at a tattoo parlour — and was sold his first electric-coil tattooing machines, inks, and needles. He soon began practising on his commune mates.

By 2001, and back in Joburg, with very few tattoo shops around and with the industry monopolised by the Hells Angels, space for apprenticeship was limited so Luzzi opened his own shop. Today, as a loner, with his hole-in-the-wall parlour above an Asian restaurant, he has marked his 19th year in the craft. The bulk of his trade is from walk-in students from the two nearby universities wanting their first small indelible emblem: "It’s still a young thing … I’m still seeing a lot of the small once-offs."

A young woman walked in during my interview, saying she wanted her late father’s signature on her neck. Luzzi says text has become very popular recently, but "a lot of people are tunnel-visioned, they just want to look cool. I don’t think they’re doing it to specifically commemorate something; there’s not a lot of deep thought when it comes to a lot of tattoos."

Social media like Pinterest has driven the growing fascination for flash, but artists try to dissuade clients from merely copying existing designs or the ink sported by their favourite stars. Luzzi says the trade is distinctly seasonal as "people show more skin in summer", with skin-piercing adding a constant trickle of quick-turnaround cash to his R650-an-hour tattooing rate.

A noticeable trend has been the rise of interest by coloured, Indian and black clients, though darker skin means a lower contrast to the inks used, so "you can’t get all the vibrant brighter colours, you can’t use yellows, whites, reds, light greens, lime greens, light blues, baby blues — all those colours just aren’t going to work". Dark-skinned clients are advised to go for bolder, blacker or grayscale work.

Since May last year, the entertainment hub of Melville-Westdene has remarkably been able to maintain three tattoo parlours within 2km. One of the others is The Crows Nest in Melville, where owner Alex Vlachos pays the rent on a spacious venue and supports the livelihoods of three artists with his R1,200 hourly rate. He is, however, more dependent than Luzzi on deposit-secured bookings, and cultivates long-term return clients collecting more complex, full-panel work, right up to full body-suits – whether they "invest in the sentiment … [or] in the aesthetic". 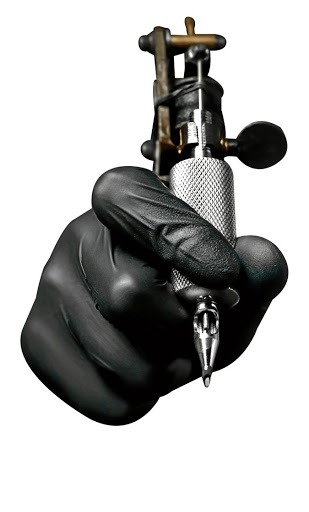 Vlachos, who is also self-taught, started tattooing a decade ago, having got tired of the corporate culture of graphic design. But today he maintains the tradition of apprenticeship, with one young woman acquiring skills and knowledge at no pay. Vlachos tells the FM that her apprenticeship will last until he deems her ready to take on her first paying client, though she is allowed to practise on willing guinea pigs.

But before he even allows her near the needles — and he prefers the lighter new rotary machines to the heavy old coil types — she will first be steeped in proper hygiene.

"That medical side of it comes in first … the cross-contamination side; there’s a whole blood-borne pathogen test."

Although there is a new SA Council for Piercing & Tattoo Professionals which promotes medical waste codes and the trade’s bylaws, reputable parlours mostly maintain standards by keeping up with international trends — though Vlachos expresses concern that the rapid growth of the sector sometimes attracts fly-by-nights. Tattoo parlours, he says, are viewed by health and safety officials as similar to beauty salons, with inspectors not always au fait with their methods.

Sanitation involves a four-step process: each tool and component of the machines used goes into an ultrasound machine that shakes free any remaining ink or dirt, the items are then scrubbed by hand in sterilising chemicals, steamed under high pressure in an autoclave and sterilised under ultraviolet light. While some equipment is now manufactured locally, lab-certified inks are still imported.

Vlachos says it’s surprising how young kids these days fill their skin up so rapidly, but Mnqali says: "These kids are enjoying life … if they’re doing it now, maybe it’s their right time to do it."

And with artists of colour like Ethel Laka in Maboneng, or Ndumiso Ramethe and Sbu Dlamini of Soweto Ink, which runs its own tattoo festival each December, this growing craft has come a long way.

Handbags are objects of obsession, status — and now, as Adele Shevel explains, savvy investment options
Life
11 months ago
Next Article

1.
Joburg’s lost hotels
Life
2.
What’s new on Showmax in March 2021
Life / On The Screen
3.
Pen collector has ink in his veins
Life
4.
THEATRE: Dabbling in the dark arts
Life / Theatre
5.
The Carlton Hotel: ghost of Joburg past
Life / Books

1.
Joburg’s lost hotels
Life
2.
What’s new on Showmax in March 2021
Life / On The Screen
3.
Pen collector has ink in his veins
Life
4.
THEATRE: Dabbling in the dark arts
Life / Theatre
5.
The Carlton Hotel: ghost of Joburg past
Life / Books

No easy way back for hotels

HILARY JOFFE: OV: never before have so many depended ...

Bidvest cleans up in hygiene sector