Crocodile tears for those who died at Enyobeni tavern 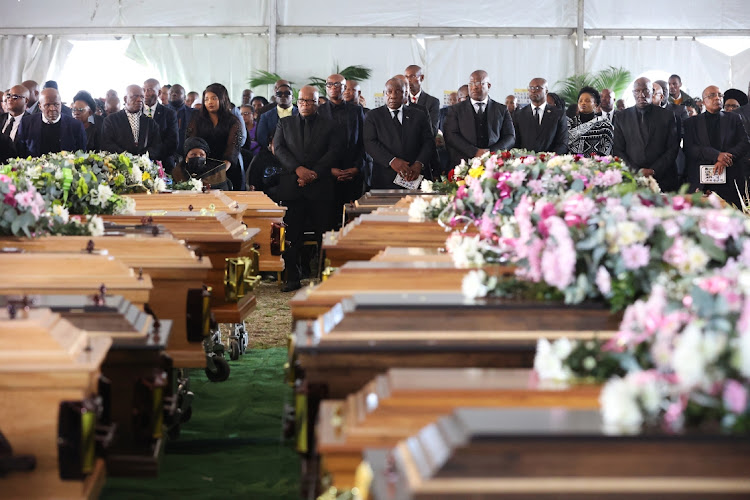 President Cyril Ramaphosa at the mass funeral for those who died in the Enyobeni tragedy in East London. Picture: ALAN EASON

Nkosinathi Sikobi, a community leader from Enyobeni where 21 young people died in a tavern during a “pens down” party in June, has summed up the point-scoring and political hand-wringing that have accompanied the tragedy far better than most others.

“It’s useless for all these politicians to come here,” he said, “and say all these nice things and then after the funeral they are nowhere to be found.”

Not to puncture Sikobi’s very real despair, but if you look up the words “callous”, “slimy”, “glad-handing” or “carpetbagger”, it’s almost certain the entry will say “see politician”.

You only need consider the first of the funerals to get a sense of Sikobi’s anger: 21 coffins but 19 of them empty, there only for a show of symbolism for the top brass to cry crocodile tears over.

SA should brace itself for more of this as the gun smoke clears from the three tavern shootings at the weekend.

In the wake of Enyobeni, President Cyril Ramaphosa called for the drinking age to be raised from 18 to 21 (the youngest victim was 13). What will the government’s response be to the shootings? Tougher gun laws? Maybe a nationwide amnesty for all those currently stashing AK-47s in their houses to turn them over to the cops, who will in turn stash them in an armoury from which they can later dribble out onto the streets when no-one is looking?

Or maybe the government will simply close the taverns, lockdown style, because of a link between alcohol and trauma wards full of shot and dying people.

So SA staggers along, wounded, bleeding and struggling to breathe, and the only sounds are fading hoofbeats and the slam, slam, slam of stable doors.

As authorities search for the gunmen, the national police commissioner and police minister will conduct a site visit to the Soweto crime scene
National
1 month ago

‘As a nation, we cannot allow violent criminals to terrorise us in this way, regardless of where such incidents may occur’
National
1 month ago
Next Article