How to make SA ungovernable: block the N3 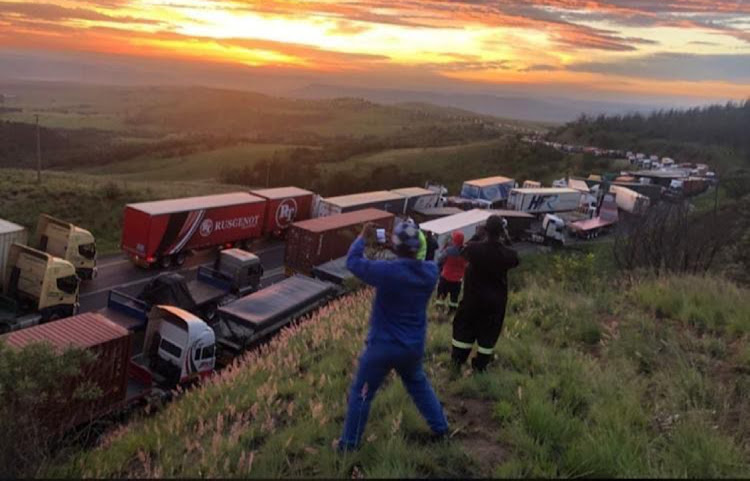 Saying, as transport minister Fikile “Mr Fixit” Mbalula did last week, that the blockade of trucks on the N3 highway could “potentially damage the economy” is like saying there is potentially a little bit of a war in Ukraine.

The N3 is the economic artery along which most of Gauteng’s lifeblood flows. This is especially true since the Natcor rail corridor is still not back online after April’s floods.

If you stand atop Van Reenen’s Pass at night, you might see the admittedly impressive sight of trucks grinding slowly uphill in a solid river of light reaching from the Tugela toll plaza to the top of the pass. The N3 is SA’s Suez Canal, its Transcontinental Railroad, its Silk Road, and all it takes is the piece of errant cholesterol from one burning blockaded truck to give the country a heart attack.

The issue, allegedly, is that the government isn’t doing enough to prevent foreign truckers from taking local jobs.

There may be a speck of truth there. A local truck owner, whose most profitable route was delivering earthmoving equipment to the Democratic Republic of the Congo (DRC), once told me he preferred using Zimbabwean drivers — one of them determinedly undocumented — on these epics because the rest were no match for the DRC’s hardened scammers. It is only a speck, though.

Much more strange is how the blockades are really only a KwaZulu-Natal thing, meaning that foreign drivers are merely scapegoats for a barely obscured agenda to make the country ungovernable, poor and ripe for insurrection.

Given that the threats precede the blockades sometimes by weeks, the big question is why this fire isn’t being doused before it’s lit.

Of course, that would mean having a “fire brigade” in the form of actual concerned security professionals who weren’t keeping only one eye on the fire and the other on SA’s constantly shape-shifting future.