Oscars get a klap as taste hits the rocks 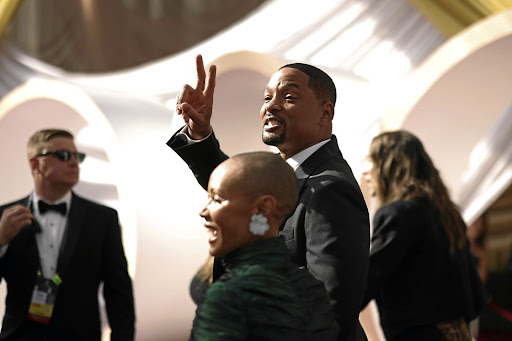 Handy: Will Smith and Jada Pinkett Smith at the Oscars on Sunday. Picture: Getty Images/Emma McIntyre

It is no small irony that the highest number of people to survive watching the Oscar awards ceremony live on TV was 55-million in 1998, when James Cameron’s disaster epic Titanic won best picture.

There were many reasons why Titanic should never have been anywhere near a gold statuette. For once, however, the Academy, the group of movie insiders who get to choose which pictures win what (and they say the Transnet "1,064 locomotive" deal was questionable?) was in tune with the punters who actually pay to watch the insiders’ movies.

Not since then has the show managed to reach those heady viewership heights. In 2021 a record low was reached when a little more than 10-million people tuned in — possibly by accident after which their remotes jammed, leaving them no means of escape — to watch a terribly bad show broadcast from a railway station with no live music to hide the sound of the once sort-of-great vessel Academy smacking the seabed after a long plunge into the cold, deep darkness.

Regrettably for the Academy and TV network ABC, which is contractually locked in until 2028, Will Smith wafting a hand over Chris Rock’s face on Sunday night is unlikely to stop the water rushing in. Everything is against it, from the rise in streaming viewers, short attention spans, boredom on a planetary scale, crap jokes, grandstanding and its numbing length of three hours.

It was always about money. In those godawful, arse-numbing hours, live viewers could expect to watch around an hour of advertising, (and no, there are no Oscars for TV ads)

TV might have been the opiate of the masses once upon a time. No more. There are new drugs in town, most with nicer effects. I blame Minecraft.

EUSEBIUS MCKAISER: Here’s why Chris Rock and Will Smith deserve neither praise nor defence