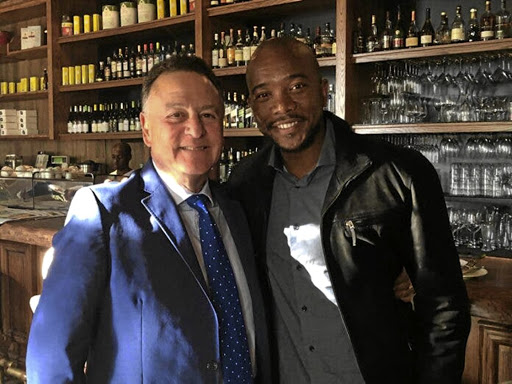 Once upon a time: Tony Leon with Mmusi Maimane. Picture: Twitter

So the words "Tony Leon" and "experiment" are trending on Google this week.

Response to Leon’s remark that Maimane’s leadership of the party was "an experiment [that] went wrong" has been swift and angry.

Leon’s response to that — he called it the "faux outrage of the woke Twitter brigade" — was just another can of petrol on the fire.

"Wa itlhagisa, ebile wa tella," he said. (You exposed yourself and are even disrespectful.)

Given SA’s grim history of "experiments" — apartheid, "independent" homelands and the SADF’s unhinged "drug rehabilitation" camp at Greefswald in Limpopo come rapidly to mind — one would hope that people would choose their metaphors more carefully.

Then again, outraging people with thoughtless commentary seems to be something the DA can always be counted on to do.

I remember a radio presenter describing the DA as the party that sits in the corner, playing with knives and stabbing itself to death by mistake.

Might this be no more than a callous and transparent attempt to generate a bit of shock around Leon’s new book, Future Tense?

Surely no politician, former or otherwise, would be that crass? Oh, wait.

Either way, whatever happens next, Leon may find the future right now is, in fact, a bit tense.

Alliances pose a problem, and does the opposition party support a coalition with the ANC?
Opinion
1 month ago

Maimane’s plan to run for president in 2024

Mmusi Maimane will run as an independent, thanks to the top court, but parliament has a golden opportunity to not just tweak but revamp the Electoral ...
News & Fox
2 weeks ago

GARETH VAN ONSELEN: The DA’s ANC strategy is as clear as mud

If the DA only talks about itself and the ANC in terms of how it is different to the ANC, the ANC universe still rules
Opinion
3 weeks ago
Next Article