A perfect metaphor for our times

How easily trade lifelines are disrupted — but how much of the Ever Given’s cargo was really needed? 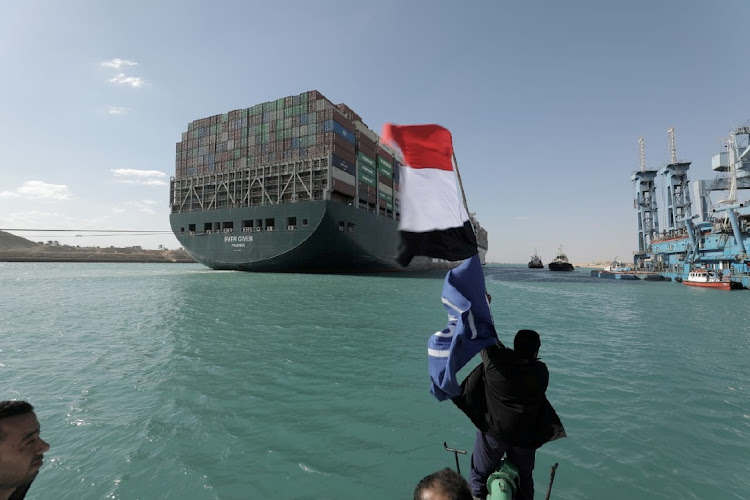 A man waves an Egyptian flag as ship Ever Given, one of the world's largest container ships, is seen after it was fully floated in the Suez Canal in Egypt. Picture: SUEZ CANAL AUTHORITY/HANDOUT via REUTERS

So the Suez Canal, that 193km-long artery that trade between Asia and Europe depends on, got clogged by a 220,000t piece of steel cholesterol and gave the world a mild heart attack.

Along with being the ship that launched a thousand memes, the sight of the bad ship Ever Given wedged crosswise in the world’s most important canal was a perfect metaphor for our times.

It was a truly global moment: a Japanese-owned, Taiwanese-operated, Panama-registered container ship carrying consumer goods from China to the Dutch port of Rotterdam getting wedged in an Egyptian canal.

The benchmark Brent crude oil price surged and fell with every bulletin from Egypt. The ship is stuck. Brent rises. Engineers will refloat it on the tide. Brent falls. They fail. Brent rises, and so on ad nauseam, and some brave souls no doubt became rich while others lost their shirts on the Brent crude wheel of fortune.

More to the point, the week-long thrombosis cost Egypt about $10m a day in lost revenues. That excludes the cost of the salvage operation, which is likely to fall on the shoulders of the Ever Given’s owner, Imabari Shipbuilding of Japan. The ship is operated by container transportation company Evergreen Marine.

One wonders if Imabari’s insurers will pick up the tab for the operation, which saw a team led by Dutch salvors — who know a thing or two about canals — helped by 13 tugs and two dredgers finally unclog the waterway.

The frightening thing is not just how easily disrupted the world’s trade lifelines are, but also the breathtaking ignorance of legions of people whose consumerist urges probably accounted for a great deal of the tat filling the Ever Given’s 20,000 containers.

Full, as one commentator put it, of stuff they thought they needed.

Even if Magashule is made to walk the plank, we’re still in the same boat with the same crew in the same silted canal
Opinion
4 months ago

You might think that a bump in traffic down our way could be a good thing for SA. Apparently, it isn’t
Opinion
4 months ago

The Suez Canal logjam - caused by a massive container vessel blocking one of the world's busiest shipping routes - may increase traffic to SA.
Business
4 months ago
Next Article