Given a crisis out of which he might have shaped the admiration he so craves, Johnson dropped the ball 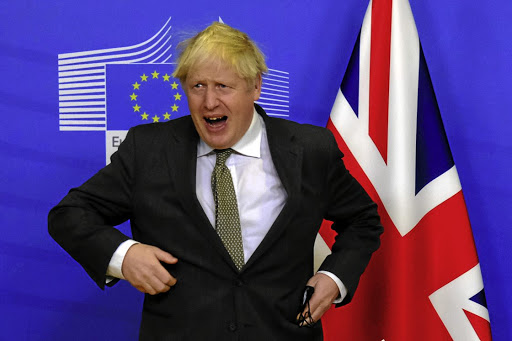 Boris Johnson is heading into what may be the most important meal of his life: A with the head of the European Commission in Brussels that could make or break a post-Brexit trade deal. Picture: Bloomberg/Alexandros Michailidis

There is a lot one can say about Boris Johnson, but not much of it is good.

If he were the last player left on a rugby field after all the other 29 players had been sent off, Johnson still wouldn’t be able to score a try.

His handling of the pandemic has, like that of his bouffant-toupéed role model over the Atlantic, been so spectacularly inefficient that it makes the SA Post Office look like Amazon.

Still, the deathly distraction of corona kept people’s minds off the slow-sinking shipwreck of Brexit, which, spewing crude oil, has now washed up on the coast of the once sceptred isle.

Johnson fancies himself the Winston Churchill of his time. Except that when given a crisis out of which he might have shaped the respect and admiration that he so desperately craves from the British people, he dropped the ball.

First corona and now Brexit which, despite warnings from even diehard Brexiteers over the likely catastrophe of a "no deal" departure, looks increasingly likely.

Harrumphing about the EU’s "red lines" — which, by the way, have been there since the whole Brexit farce kicked off – and muttering "we shall prosper mightily", as if the words will magic out of the air some deal that won’t see Welsh lamb and British beef smacked with almighty tariffs, are not the stuff of which great leaders are made. Everything will be OK, though, because the Royal Navy is to deploy four ships to protect British fishing trawlers and keep the fish-poaching Eurotrash and their garlicky boats away from Britain’s halibut and haddock.

Oh, what bitter irony — four frigates flying the white ensign, shepherding home the boats as the sun goes down on the greatest peace and economic treaty of modern times.

‘Two conditions aren’t met yet. Free and fair competition ... and an agreement that guarantees reciprocal access to markets and waters’
World
4 months ago