Why would Rudy Giuliani not blow his nose on a handkerchief, then wipe his face with the same side? 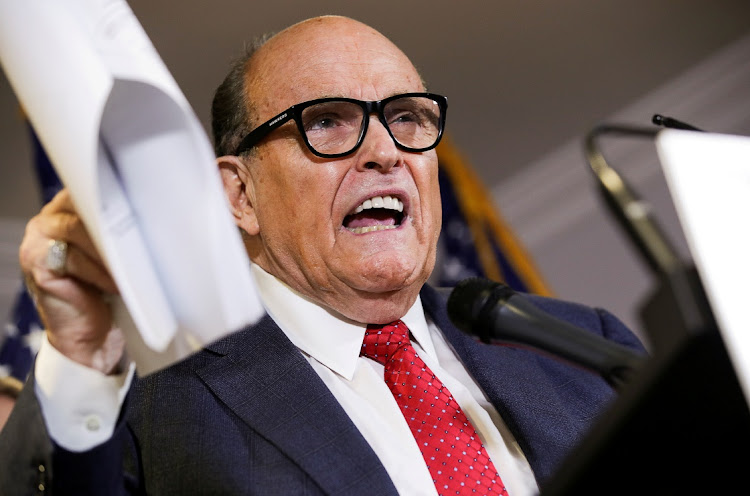 Rudy Giuliani: An ego the size of the Hindenburg. Picture: REUTERS/Jonathan Ernst

No surprise, then, that Giuliani, a kid from Brooklyn, has an ego the size of the Hindenburg and an inflammable sense of outrage to match.

You may have seen him give an unhinged press conference outside Four Seasons Total Landscaping in Philadelphia — a garden centre jammed between a crematorium and a sex shop — and days later at another presser where two rivers of black hair dye streaked down his cheeks.

Given his frantic schedule as he seeks to fulfil Donald Trump’s mission to have the election overturned, it was perhaps inevitable that he would get infected. After all, the message from the White House on how to protect oneself from the virus has been erratic. Why would he break ranks with his boss and wear a mask? Or not blow his nose on a handkerchief, and then wipe his face with the same side? Giuliani is now in hospital but "feeling good". Trump tweeted: "Get better soon, Rudy, we will carry on."

Carry on with what, exactly? Not combating the pandemic that may kill 450,000 Americans by the end of winter? Not asking folks to stay home as infections rocket? Not saying sorry to those fighting for their lives as the curve does anything but flatten?

Rudi Giuliani hospitalised as he tests positive for Covid-19

For some Americans, Trump not only won the election he’s the only person and true patriot they trust, with civil war not ‘off the table’
World
4 months ago
Next Article