It was inevitable that the Covid vaccine, like face masks and the space race, would be weaponised 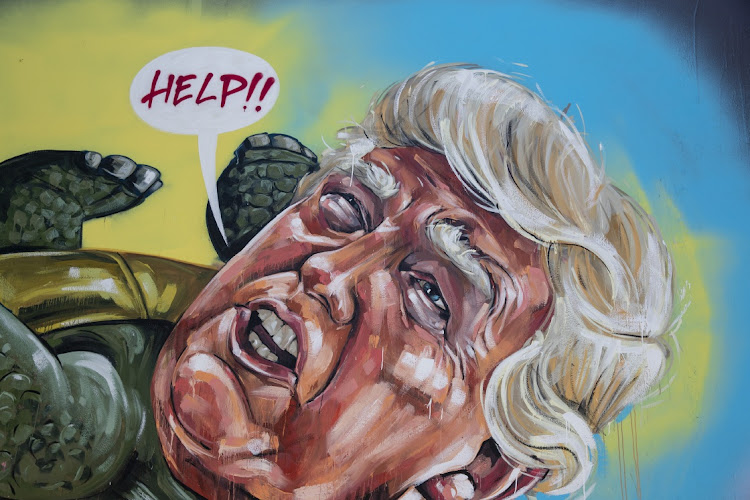 A mural by Australian artist Scott Marsh is seen on a wall at the Botany View Hotel in Sydney, Australia. Picture: Jenny Evans/Getty Images

Pfizer/BioNTech’s Covid-19 vaccine is 90% effective, its makers crow. "Oorah," a US Marine might shout. "Get some!"

Russia’s Sputnik V Covid-19 vaccine — launched by a smug Vladimir Putin in August — is also 90% effective, or so its health ministry claims.

"Urra!" a Russian infantryman might shout, dropping the "get some" because right now in Russia — with a population of 146-million and just 2.3-million doses expected to be available by year-end — the average citizen probably has a better shot of going to the moon than getting vaccinated.

It was inevitable that the vaccine, like face masks and the space race, would be weaponised. For weeks Donald Trump, grasping the jetsam of his sinking re-election campaign, superspread the claim that a vaccine was "just around the corner".

So it was, and now Pfizer’s post facto announcement has become yet another conspiracy, with Trump’s chief sockpuppet, sorry, son, Mini-Don, suggesting the timing was "nefarious". To paraphrase the narrator in the 1980s cult film Withnail & I, the purveyor of bullshit is back — will we ever be set free?

The world won’t know if the Russians jumped the gun with Sputnik V until the results — just like votes — have all been counted. Which means more Russians will need to get a shot and be exposed to the virus. The same goes for the Pfizer vaccine.

While the vaccine race plays out amid rocketing infection rates, SA’s citizens continue to jettison caution along with their masks as they party down the merry it-won’t-happen-to-me road to hell. Good luck with that.

As World Health Organisation chief Tedros Adhanom Ghebreyesus said last week: "We might be tired of Covid-19. But it is not tired of us."

Scientists are playing it safe: they want to see the data, but say that there is ‘reason to be cautiously optimistic’
Features
10 months ago
Next Article