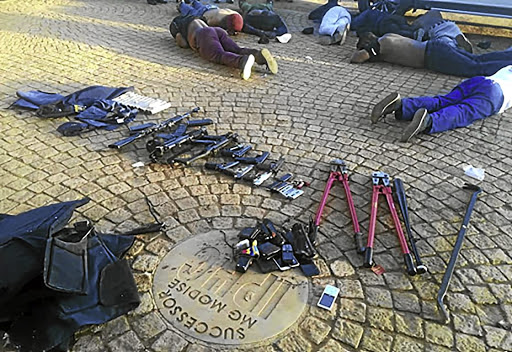 Arms for anarchy: Weapons that were recovered from attackers at the International Pentecostal Holiness Church in Zuurbekom, in the West. Picture: RandSAP via Reuters

Sixteen shotguns, five rifles, 13 pistols. That’s enough weaponry to begin a small war which, it now seems, was exactly the point of the raid carried out in the early hours of Saturday in Zuurbekom, on congregants of the International Pentecostal Holiness Church (IPHC) who happened to be asleep in the church.

The attackers, allegedly dressed as policemen, rammed through the gate, shot dead four men in a car and set it alight and shot and killed a security guard who had arrived on the scene.

The raiders then moved through the building, calling out the names of specific church elders they were looking for.

A hostage drama followed when the real cops arrived, backed up by army units.

The 40 attackers are now in police custody.

The raid was another act in a leadership feud that began when the IPHC leader, Glayton Modise, also known as the "Comforter", died in 2016. Leadership passed to Glayton’s eldest son, Tshepiso Modise.

Glayton himself had taken over the leadership of the 3-million-strong church from his father and church founder, Reverend Samuel Modise, who died in 1998.

In the case of the IPHC, the feud – in which gunmen previously attacked congregants on their way to church and also carried out an attempted hit near Brits in 2018 on IPHC executive committee chair Abbey Wessie — involves Tshepiso, his brother Leonard and Michael Sandlana who, TimesLive reports, is believed to be Glayton Modise’s son born out of wedlock.

The trouble with succession in dynasties is that there is, almost always, a family member who gets left behind.

Leadership feuds are one thing. Pre-dawn raids on sleeping churchgoers by men with assault rifles and pump-action shotguns are the stuff of anarchy.